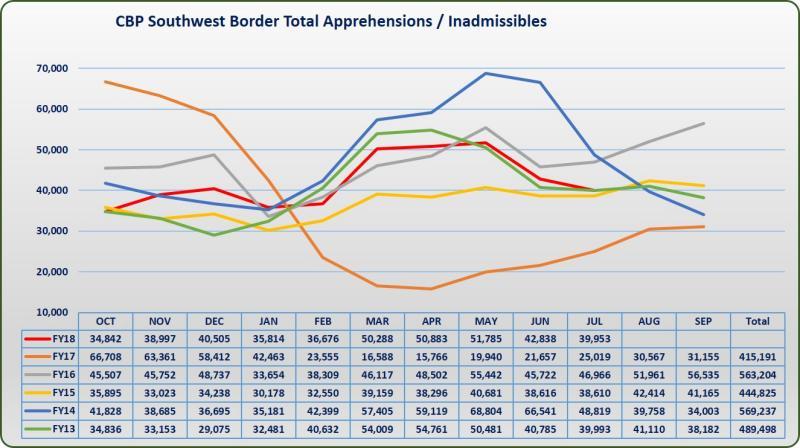 Following the Trump Administrations announcement of a zero-tolerance policy and a subsequent increase in prosecution of illegal border crossers, the number of total apprehensions fell from 34,095 in June to 31,303 in July, according to the July Southwest Border Migration Report released Wednesday morning. Apprehensions of Unaccompanied Alien Children (UAC) between ports of entry fell by nearly 23 percent, officials stated.

“Southwest Border Migration numbers dropped in July for the second month in a row.” Department of Homeland Security Press Secretary Tyler Q. Houlton said in a written statement provided to Breitbart Texas. “This decrease shows that when there are real consequences for breaking the law, the conduct of those considering crimes will change.”

“In the month of July, we saw a decrease in illegal border crossings because human traffickers and Transnational Criminal Organizations were put on notice that this Administration was increasing prosecutions of those entering the country illegally,” Houlton explained. “Despite our terribly broken immigration laws, the administration has still been able to impact illegal immigration – but we need Congress to act to fix our system.”

Center for Immigration Studies Director of Policy Studies Jessica Vaughan told Breitbart Texas, “It’s good to see the drop in apprehensions, as it could indicate that the tide of illegal crossings has started to turn. We’ll know more as the months go on.”

“It’s especially encouraging since there are so many mixed messages that conflict with the Trump administration’s efforts to discourage people from this dangerous decision,” Vaughan continued. “Between  the smugglers, the advocacy groups, the sanctuary policies, and the courts – not to mention more talk of a DACA restart – there are still plenty of incentives for people to try to come illegally, and to bring a child as a virtual guarantee that you will be allowed in, and at least the child will be allowed to stay indefinitely.”

Total apprehensions of illegal immigrants between ports of entry fell in June and July from a May high of 40,333, the report stated. The May apprehensions report showed a 160 percent increase over the same month in 2017, Breitbart Texas reported. At that time, Houlton expressed concern about the increasing number of Family Unit Alien (FMUA) apprehensions.

Houlton said this morning that the impact of enforcement on FMUAs has not moved, despite efforts to increase enforcement and prosecution actions.

“The number of family units apprehended at the border remains high and their percentage of total crossings has increased as court decisions prevent us from detaining and prosecuting family unit adults,” the press secretary stated. “The inability to apply consequences to any law breaker ultimately threatens the safety and security of the nation and its communities.”

“DHS is continuing to refer to DOJ single adult illegal border crossers for prosecution at historic rates,” Houlton concluded. “Additionally, the Secretary has been engaging weekly with Mexican and Central American officials to more aggressively tackle the root causes of this crisis—and DHS has received commitments on specific actions that can be taken with and by our partners to confront the issue more decisively.”

Editor’s Note: This article has been updated with additional information from CBP officials.