Woods made a splash with a series of tweets in Septemeber that were critical of the Obama administration before bowing out with a farewell message.

“Hopefully my time on Twitter helped some of you finally see the light. Goodbye, All,” Woods said on Sep. 19.

After Saturday’s events in Brooklyn, New York, Woods came alive on the platform once again to discuss the situation in New York City.

The actor had some words for Al Sharpton and included a photo of him at a protest against police. ‘This disgusting pig is DIRECTLY responsible for the murder of two good policemen. No discussion,” he said. 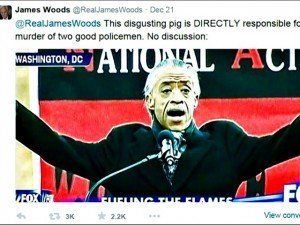 That post was reportedly taken down, but the actor wasn’t finished, yet. He continued tweeting using a series of hashtags, which included included ‘#PigSharpton’, #RaceHucksters, #TurnYourBack, #BlueLivesMatter.

The self-described conservative went on to post a series of tweets, lasting  into Monday morning, dishing out his opinion of both the events and the affected parties.

New Hashtag: #TurnYourBack EVERY time DeBlasio speaks, EVERY Police Officer in sight should turn his/her back. Especially at Cops’ funerals

Paul/Sharpton pic just creepy on all levels, and I liked the fatter, greasier #PigSharpton better… pic.twitter.com/0Up02ecplI