Apple and rock band U2 have together been accused of violating the Russian law against “gay propaganda among minors “by a Russian legislator, Billboard reports.

The controversial legislation was adopted two years ago in the country and has been viewed as a crackdown on the Russian gay community.

Following outrage last year after U2’s Songs of Innocence album was forced into millions of people’s iTunes libraries, Alexander Starovoitov, a member of the Russian State Duma, the lower chamber of Parliament, has requested the Prosecutor’s Office to investigate.

“Just like many citizens of the Russian Federation, I am an iPhone owner,” Starovoitov said in an address to the Prosecutor’s Office, via the Russian daily Izvestia. “In 2014, tracks by U2 were uploaded in a viral way to my Music folder in iTunes, with the album cover featuring what I believe to be two men engaged in a manifestation of nontraditional sexual relations.” 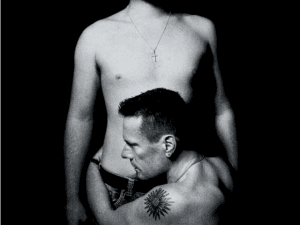 The album art in question, pictured above, features the bands drummer Larry Mullen, Jr. engaged in a shirtless hug with his 18-year-old son, Elvis.

U2 explained in September that the photograph was meant to visually convey how “holding on to your own innocence is a lot harder than holding onto someone else’s.”

Seeing as Russia has a low tolerance for homosexual behavior, the interpretation comes as little surprise.

A promoter of Lady Gaga’s 2013 show was fined under the “gay propaganda law.”

In 2014, Vitaly Milonov, the chief proponent of the law, called for a banning of cross-dresser Conchita’s Wurst’s Eurovision Song Contest in Russia. She also asked for a boycott against Eurovision.

A monument to Steve Jobs and Apple was removed from a St. Petersburg university late last year not long after Apple CEO Tim Cook announced he is gay.

While Cook denounced Indiana’s religious freedom law as bigoted a month ago, Apple remains mum on its business dealings with countries where gays are actually persecuted and in some cases, put to death.

Apple has not yet responded to the controversy