Director Joss Whedon deleted his Twitter account Monday after a stream of hateful messages directed at him by feminists upset with story elements of Avengers: Age of Ultron, the weekend’s big box-office smash.

Tech Times reports that Whedon’s final tweet was an implicit goodbye. He wrote, “Thank you to all the people who’ve been so kind and funny and inspiring up in here.”

While Whedon himself hasn’t said why he deleted his account with over 1 million followers, it likely has something to do with the angry backlash he was facing from feminist critics of his latest tentpole Marvel film. Twitter user Astojap collected dozens of the tweets aimed at Whedon. Here is a sample: 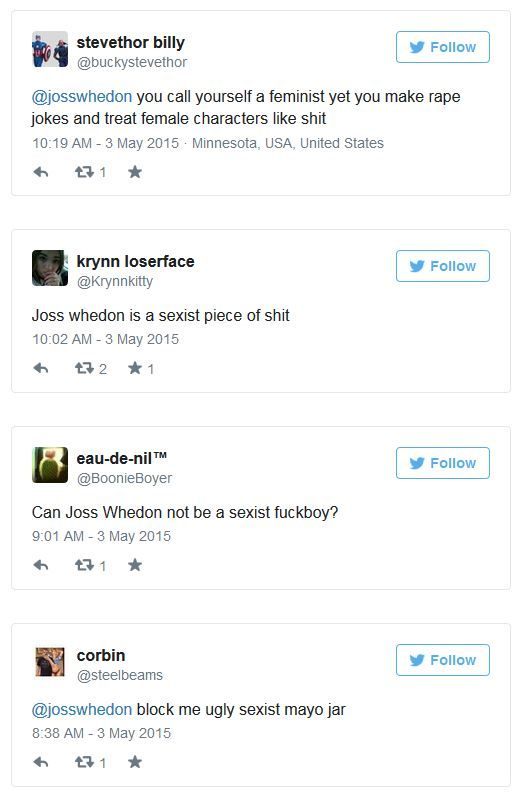 The criticisms seem to mostly stem from two issues connected to Avengers: Age of Ultron. Be aware there are some spoilers in what follows.

The first issue is a throwaway joke during a scene in which the Avengers take turns trying to lift Thor’s (Chris Hemsworth) hammer. When Tony Stark (Robert Downey, Jr.) makes his attempt, he says that as ruler of Asgard, he intends to re-institute Prima Nocta.

Prima Nocta is the right of kings to sleep with any woman on the night of her wedding. BuzzFeed’s movie critic referred to this as a “weird, old-timey rape joke” a week before the film was even released in the U.S. More recently the feminist site Feministing jumped on the bandwagon, criticizing the joke.

The other issue which seems to have angered critics is the behavior of fictional character Black Widow (Scarlett Johannson) in the film. Again, spoilers ahead.

Late in the film, Black Widow reveals that she is unable to have a family because she was sterilized as part of her training to be a Russian spy. In the same scene she suggests that she, like Bruce Banner (Mark Ruffalo), feels like a monster. Some critics took this as a suggestion that those unable to conceive children are monsters. 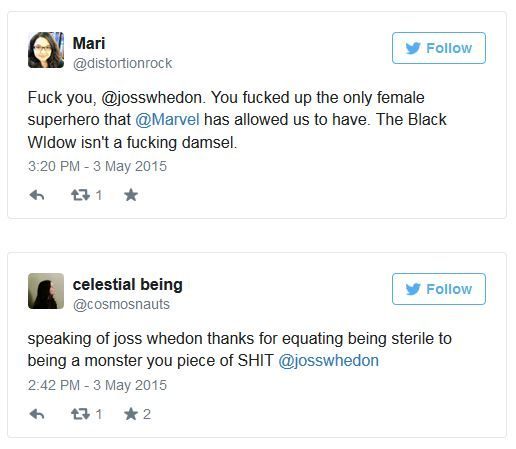 The most surprising part of the Black Widow backlash is that Whedon has long considered himself a feminist for his portrayal of strong women, starting with his film/television show Buffy the Vampire Slayer. Whedon also created Firefly and Dollhouse, two shows which featured strong female characters in leading roles.

Whedon has been vocal recently about the portrayal of women in films other than his own. Last month he criticized a clip of the forthcoming film Jurassic World saying the characters were “’70s era sexist.” Earlier this year, Whedon was also critical of the portrayal of the lead character in the Twilight films which he suggested boiled down to “Choosing Boyfriends: The Movie.”