“Santa baby, I’d love to know my ass won’t get grabbed, at work, by some ignorant jerk,” Miley Cyrus sings. She also says that she doesn’t want presents, saying instead, “I can buy my own damn stuff.”

The 26-year-old singer also demands equal pay for women, and to not be interrupted by men.

Listen Santa to what I say
A girl’s best friend is equal pay
Stop interrupting me, when I talk
And don’t text me pictures of your…

Cyrus is no stranger to using publicity stunts to boost her career when she has new music to sell.

The pop star, however, gain fame for being spanked and groped, photos of which Cyus has happily shared on social media to he millions of fans.

Here’s a video montage of half-naked Cyrus twerking and being spanked (and spanking others) through the years. 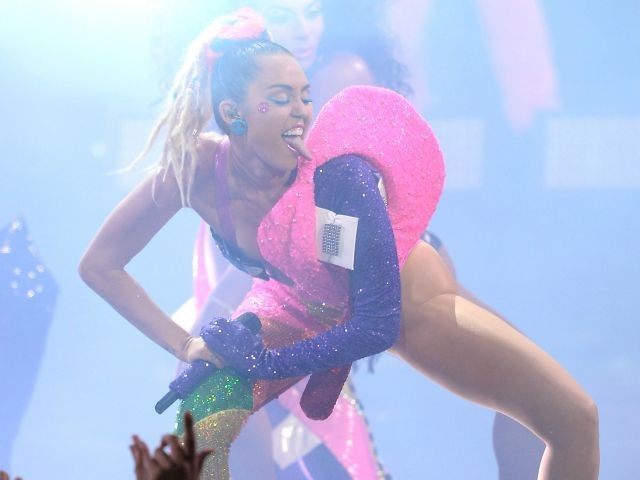 Onstage during the 2015 MTV Video Music Awards at Microsoft Theater on August 30, 2015 in Los Angeles, California.

The former Hannah Montana star recently starred in a bizarre music video that featured her mooning police, as well as driving past kneeling football players, priests in a strip club, and a gun range where children are shooting at her.

Like so many others in the music industry, Miley Cyrus is outspoken about her left-wing beliefs. During the 2016 election, she repeatedly claimed she would leave the United States if Donald Trump won. In 2017, she backtracked, saying that she would not, in fact, leave America.

“I’m not leaving the country, that’s dumb. Because that’s me abandoning my country when I think I’ve got a good thing to say to my country,” she said in an interview.