NEW YORK (AP) — Michelle Obama’s next promotion for her memoir “Becoming” will center on college students.

The former first lady will appear Nov. 9 at 1 p.m. with “black-ish” actor Yara Shahidi for a livestream conversation with students from 22 schools throughout the country, from Cal Poly Pomona to Prince George’s Community College in Largo, Maryland, from where Obama and Shahidi will speak.

BET plans to televise the event at a later date, to be determined.

“I can’t wait to hear from students across our country as they navigate their studies and lives during this unprecedented time,” Obama said in a statement Monday.

“As a first-generation college student myself, I remember my own struggles to manage classes and figure out my place on campus — and I can’t even imagine how much harder it is to do it during a pandemic, when so much feels like it’s constantly up in the air. I just hope they realize that moments of self-doubt and fear are completely natural, but if we embrace those moments — if we own our stories and use our voices — we can share the very best parts of ourselves with the world.”’ 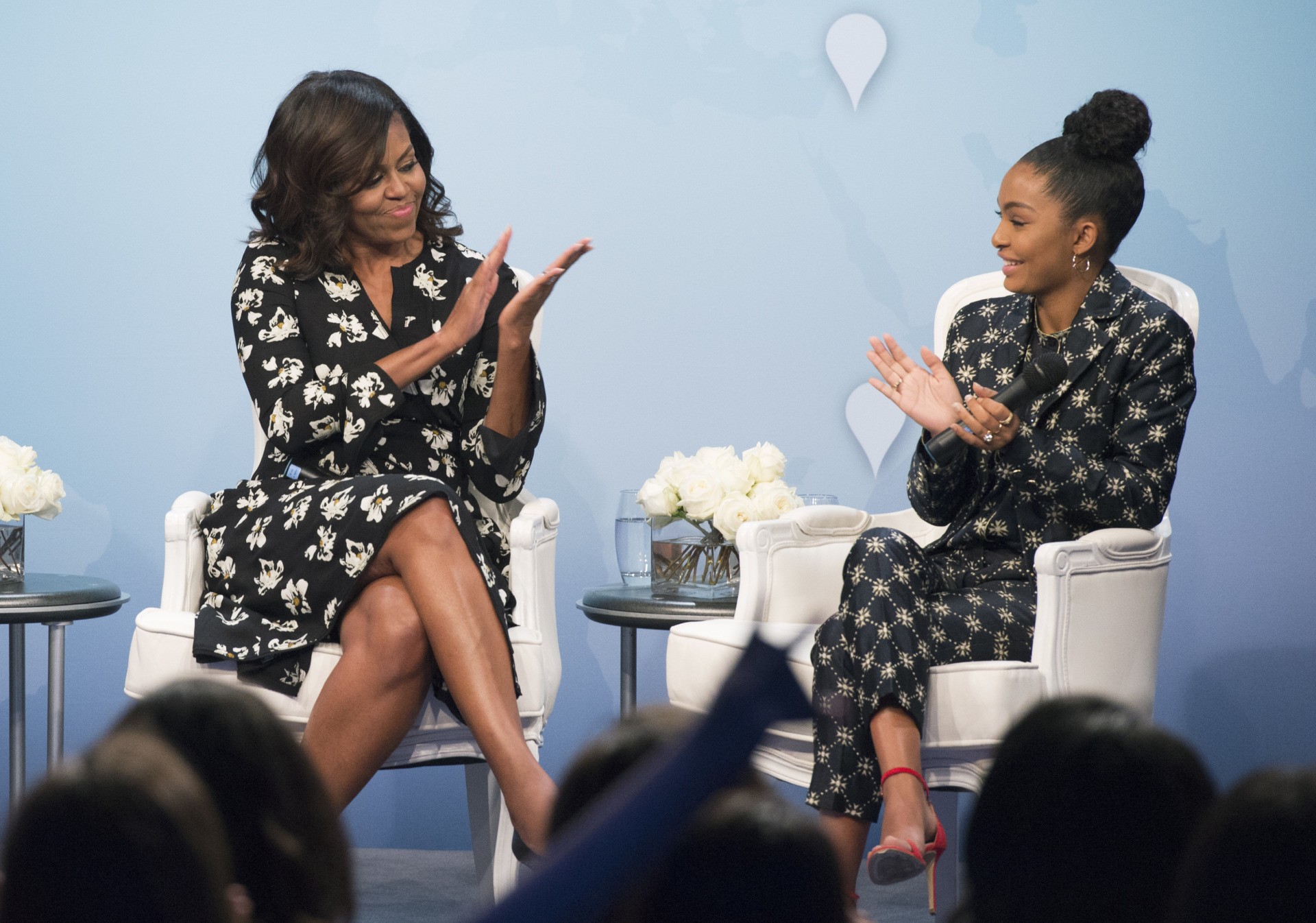 First lady Michelle Obama applauds actress Yara Shahidi while participating in Glamour’s “A Brighter Future: A Global Conversation on Girls’ Education,” in celebration of International Day of the Girl and Let Girls Learn, Tuesday, Oct. 11, 2016, at the Newseum in Washington. (AP Photo/Molly Riley)

Along with the Nov. 9 event, Crown is donating 100 copies to each of 12 schools in the Maryland Community College Consortium.

“We know the book has been deeply impactful for young people, especially young women, and has become a kind of touchstone,” Drake said.

Obama’s book, published in 2018, has sold nearly 10 million copies in the U.S. alone, and continues to sell more than 2,000 copies a week, according to Crown president David Drake. Most political memoirs, even ones by presidents or first ladies, are forgotten after the initial publicity. But Obama’s book has been assigned everywhere from Ohio State University to Fresno City College, in courses ranging from composition to Black women’s studies.

Julie Gallagher, an associate professor of history at Penn State Brandywine, included the book in her course on civil rights in the modern era. She noted that civil rights narratives often focus on the South, but that Obama grew up in Chicago, and so told a story of a Northern state. And Gallagher found Obama’s memoir an invaluable contrast to how Black women often are portrayed in the media.

“Here’s this woman who comes from a very strong, loving family,” she said. “This is a story of love, determination, grit, community, of multiple generations working to strive for the American dream.”

In 2020, the University of California, Irvine, included “Becoming” in its “Great Big Read” for students, faculty and staff. Marguerite Bonous-Hammarth, the school’s assistant vice chancellor for equity, diversity and inclusion, told The Associated Press that themes discussed included “self-identity, patriotism, relationships across significant others and families, as well as questioning roles and finding ways to circumvent the incidences and impacts of discrimination in society.”

Earlier this year, Crown released a young readers edition, for ages 10 and up, that Obama will help promote when she appears at the National Council of Teachers of English convention on Nov. 18. She will deliver the keynote address and speak with the vice president of the NCTE, Valerie Kinloch, the first Black woman dean of the University of Pittsburgh’s School of Education.

Elsewhere, Obama is continuing to tap her deep celebrity connections ahead of next year’s midterms to push key legislation including the John Lewis Voting Rights Advancement Act. If passed and signed into the law, the act would federalize elections and cancel voter identification requirements.

Join us September 23 at 8pm EST for our virtual #NationalVoterRegistrationDay Week of Action Kickoff Rally with @CP3 and @MichelleObama! #BackToTheBallotBox