UKIP suspended the MEP for Yorkshire and North Lincolnshire shortly before the Muslim businessman announced his defection to the Conservative Party last weekend. But in a statement on social media, Mr Bloom publicly called for Mr Crowther’s resignation.

I have reluctantly called publicly for the resignation of Steve Crowther this weekend. The Amjad Bashir debacle was and is his sole responsibility. We in Yorkshire moved heaven and earth to stop Bashir in February when we found out about his criminal connections. Crowther would simply not listen, he could have been withdrawn from the list with still 8 weeks to go. Crowther put him above Mike Hookem , a trusted long term activist but no. We could have been back to one MEP, after all that hard work and money. This is another foul up in an ever increasing trail, in the interests of UKIP he must go.

A party spokesman responded to the claims that Mr Bashir had been suspended for alleged financial irregularities and employment concerns saying “The UK Independence Party has a zero-tolerance policy and takes the matters at hand extremely seriously.”

“Ukip will not tolerate anyone abusing their positions in the party, as we have a firm commitment to differing ourselves from the existing political classes,” they said. 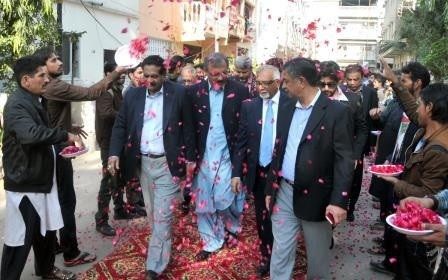 And the Conservative Party were forced to defend the decision to welcome Mr Bashir as one of their own representatives, with Mr Cameron himself saying he was “absolutely delighted”, accusing UKIP of being a sore loser and orchestrating a smear campaign.

But with highly damning evidence due to be revealed in a national Sunday newspaper, it looked like UKIP had managed to win the Battle of Bashir.

That was until Mr Bloom broke cover and revealed that far from being caught unawares about Mr Bashir’s dealings with shady characters including Mujeeb Bhutto, who was the head of a kidnapping gang and who calls the MEP ‘uncle’, Party Chairman Steve Crowther had been given full details by members from Yorkshire.

Mr Bhutto served as UKIP’s Commonwealth spokesman for a year before being asked to resign from the party.

Mujeeb ur Rehman Bhutto’s gang were behind a high-profile kidnapping in Karachi in 2004 and he then took a £56,000 ransom payment in Manchester. IN 2005 he admitted he was the gang’s “boss” and was jailed for seven years by a UK court.

Mr Bloom, who is no fan of Mr Crowther and has in the past accused him of being ‘a plant’ due to many of the terrible decisions he had made, wrote on Facebook that the former advertising man, who is a good friend of Deputy Chairman Neil Hamilton should ‘resign as chairman’.

In a comment to a post by his successor, UKIP MEP Jane Collins who posted a link to a petition calling on Mr Bashir to step down from his position and hand his seat back to UKIP, Mr Bloom dropped the bombshell that ‘Yorkshire told you this would happen but you would not listen you backed him, we didn’t.’ 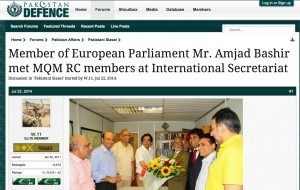 In a statement to Breitbart London Mr Bloom said that evidence he has passed on “Exposes Crowther as the main sponsor for Bashir against the wishes of the Yorkshire activists.”

But he was keen to point out that while he alleges Mr Crowther knew about Mr Bashir’s links criminals, he says that the party leader Nigel Farage ‘knew nothing of the incriminating correspondence’.

While serving as an MEP for UKIP, his colleagues complained that he spent most of his time at the Pakistani embassy and telephoned Muttahida Quami Movement deputy convenor Nadeem Nusrat to ‘offer his congratulations’ on the anniversary of the country’s 67th anniversary of independence.

Photos also show Mr Bashir, along with Mr Bhutto and the MEPs political assistant Hassan Munir meeting up with the MQM secretariat, which in Canada is a designated terror organisation and according to Muslim Labour peer Lord Ahmed have been classified as a Tier III terror organisation by the US authorities.