Two Identitarians scaled the famous Burgtheater in Vienna to hang a banner protesting the performance of a pro-migrant play, and Breitbart London has the first sneak-peek at the incredible footage they recorded from the stunt.

Two activists of the ‘hipster right-wing’ Identitarian movement in Austria made a daring protest against the national theatre in Vienna. The Burgtheater had put on a production of the controversial pro-migrant play “Die Schutzbefohlenen” on Wednesday night.

The Identitarians had previously interrupted a performance of the play being performed at the University of Vienna where they stormed the stage and called the play goers hypocrites who they say celebrate the migrant crisis. 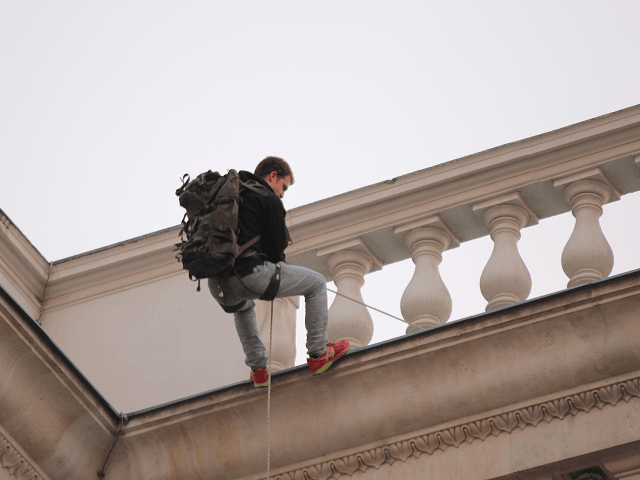 In the voice-over for the new English-language film, Austrian Identitarian leader Martin Sellner explains: “After our protest against the refugees-welcome play at our university the leftist president of the national assembly, Mrs Bures, invited them into the famous Burg-theater, to repeat it under her ‘honorary protection’.

“A few days later a 21 year old Student was brutally raped by 3 refugees in Vienna. You Hypocrites!

“Where are your tears, and plays for the victims of terrorism and immigration? We will show the whole world what you are and what the Austrian youth thinks of you.

“We don’t care about the honorary protection, when you can’t protect our own women and children. You are hypocrites and your time is over!”

Media claimed that the youth group, who protest against the Islamisation of Europe and mass migration, picked fights with the audience members though the Identitarians deny attacking anyone and claim that they were the ones being attacked. They claimed that the protest at the university was against the establishment saying, “the action is not directed against asylum seekers on the stage, but against the hypocrites in the audience and their politics.” 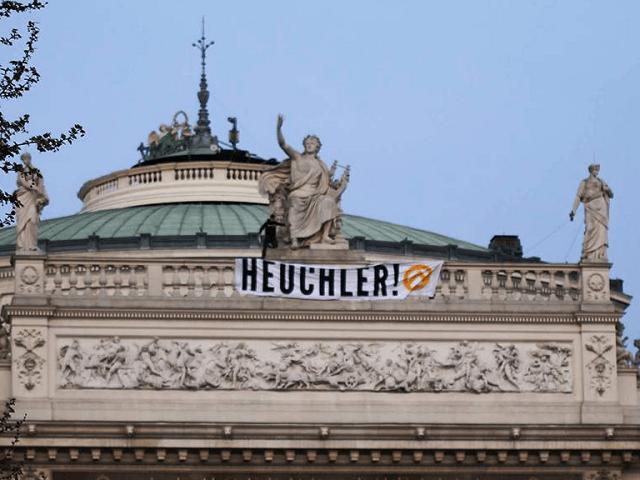 The new protest this Wednesday protest saw two members of the group take a ladder to scale the side of the imposing theatre and put up a banner which read, “hypocrites” as they threw leaflet s from the roof of the building before making their escape.

Perhaps the most impressive feat of the protest was their descent from the threater, rappelling hundreds of feet down the side of the building.

Once down the leader of the Identitarians, and one of the pair who carried out the protest, Martin Sellner, took a quick selfie and posted it to Facebook with the caption, “I got me some right now #dasistflyshit.”

The fliers dropped from the roof made clear that the action was inspired by the violent gang rape of a young Austrian woman the preceeding weekend by three Afghan teenagers. The shocking incident is said to have helped anti-mass migration Freedom Party candidate Norbert Hofer win the first round of the vote. 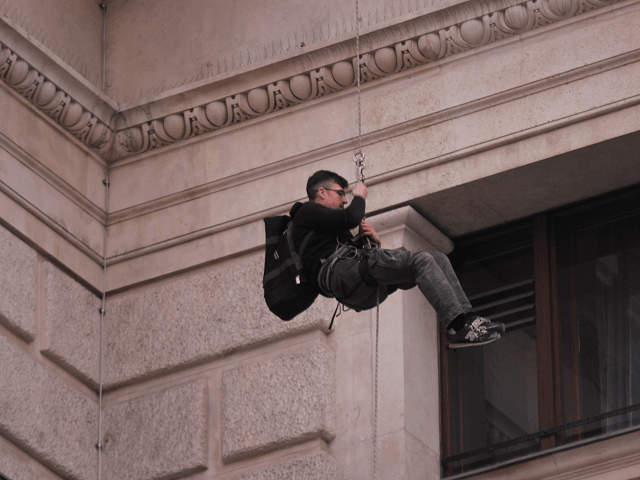 Reaction to the protest was critical with the left wing extremist group Antifa hanging a banner from the main balcony and Socialist Party Arts and Culture Minister Josef Ostermayer saying, “there can and must be no understanding and no acceptance of these actions,” and called for solidarity against groups he says try and “split society,” Der Standard reports.

The Burgtheater posted a response on their Facebook page saying, “Identitarians get down from our house and get out of Europe. You, your fear-mongering, your hatred and your rabble-rousing have no place here.”

The top Facebook comment on the post was from Identitarian spokesman Alexander Markovics who said, “We are here to stay. We’re tomorrow, you guys are from yesterday. Your hypocrisy and decadence has no more room in the new Austria , you can leave”.