Members of Parliament from French president Emmanuel Macron’s globalist-minded movement have helped set up a party in the United Kingdom aiming to stop Brexit.

‘Renew’ was set up with support and advice from “several” French elected representatives from Macron’s La République En Marche (LREM) and will be launched next week, according to French news service franceinfo whose reporter was present at a recent meeting.

Bearing the slogan, “People from outside politics to renew Britain’s hope”, the website lists three manifesto aims: “renew our economy”, “reduce inequality”, and “reverse Brexit” by fighting for a second referendum.

“We want to stop Brexit and believe a second referendum on the final deal negotiated with the EU is overwhelmingly in the interests of both Leave and Remain supporters,” the website states.

“We will put pressure on all politicians to offer a second referendum by standing parliamentary candidates in every constituency in the UK.”

Sandra Khadhouri, head of communications & one of our three principles: “We need to reverse Brexit, so that we can focus on what really matters in the UK… inequality is not being addressed… we respect the system but we feel that the system has been subverted” #RenewBritain pic.twitter.com/ouB0S1NbB0

French MP Amélie de Montchalin, a member of Macron’s LREM and former economist, said in a video posted on Renew’s website that she and Renew co-founder Chris Coghlan “had long exchanges… on what we could do for Europe and European countries”.

She continued: “One year ago France was like the UK and the U.S., looking for hope because it was feeling in despair. I think today in Britain you can look at the future with hope and I think Renew is a movement you can embrace.”

Couglan, who stood as an independent anti-Brexit candidate in June’s election in Battersea, co-founded the party with Oliver King and James Torrance.

The party has maintained a relatively low profile since its registration with the UK’s Electoral Commission on October 30th, 2017.  The first low-key meeting was held this weekend, where a constituency map was taped to the wall marking the names of 222 Renew candidates.

A principal of the party James Clark told The Local that there are no formal links between Renew and Macron’s party; however, members of LREM were allegedly at the weekend meeting to give advice on tactics needed to launch a new party.

Amongst the candidates is Hasseb Ur Rehman, a lawyer who said he is ‘disgusted’ by Brexit and disappointed with the mainstream political parties.

“They do not really represent the will of the people anymore,” said Mr. Rehman. “[Renew is] a genuine civil society movement and I really wanted to be part of it.”

The party candidate added: “As people begin to see the consequences of Brexit, we will have more and more support.”

Renew spokesman Sandra Khadouri added that she wants to address the “underprivileged” who regret voting Brexit to “ask them why they are angry”. 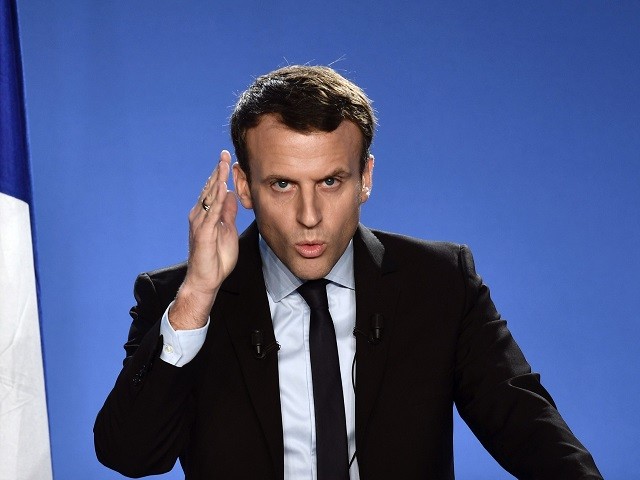 Then-candidate Emmanuel Macron delivers a speech during a press conference to announce his candidacy for next year’s presidential election on November 16, 2016 in Bobigny, near Paris. (Photo credit PHILIPPE LOPEZ/AFP/Getty Images)

The party wants to replicate the success of progressive, pro-European Union President Macron.

“We follow exactly the example of Mr. Macron,” one of the French-speaking founders of the party told franceinfo.

“We’re going to tour Britain and we’re going to ask [Britons] questions,” explained the anonymous Renew member. “In France, the first question was ‘what’s wrong with France?’ we are going to do the same thing,” he said.

Though the likes of arch-Remainer former prime minister Tony Blair and New Labour grandee Peter Mandelson have been active and vocal about overturning Brexit, this is the first time of note a political party, backed by foreign actors, has been structured with the purpose of overturning a democratic mandate.