The ever more unhinged former president of Ireland, Mary McAleese, railed against the Catholic Church in an interview with the Irish Times this week, denouncing infant baptism and praising gay rights.

Mrs. McAleese said she does not plan to attend the upcoming World Meeting of Families in Dublin but will be marching in the Dublin Gay Pride Parade next Saturday.

She will march “under the BeLongTo banner” and with “the members of our own family, straight and gay, young and old, we’ll all be there,” she announced.

The World Meeting of Families, on the other hand, has become “a political rally rather than a religious and spiritual experience,” McAleese said, and is a forum “for the reinforcement of orthodoxy.”

Regarding the baptism of children, McAleese said you cannot impose “obligations on people who are only two weeks old.”

Echoing professional atheist Richard Dawkins, who has argued that labeling children as possessors of religious beliefs is “always a form of child abuse,” McAleese said that babies baptized in the Catholic Church are “infant conscripts who are held to lifelong obligations of obedience.” 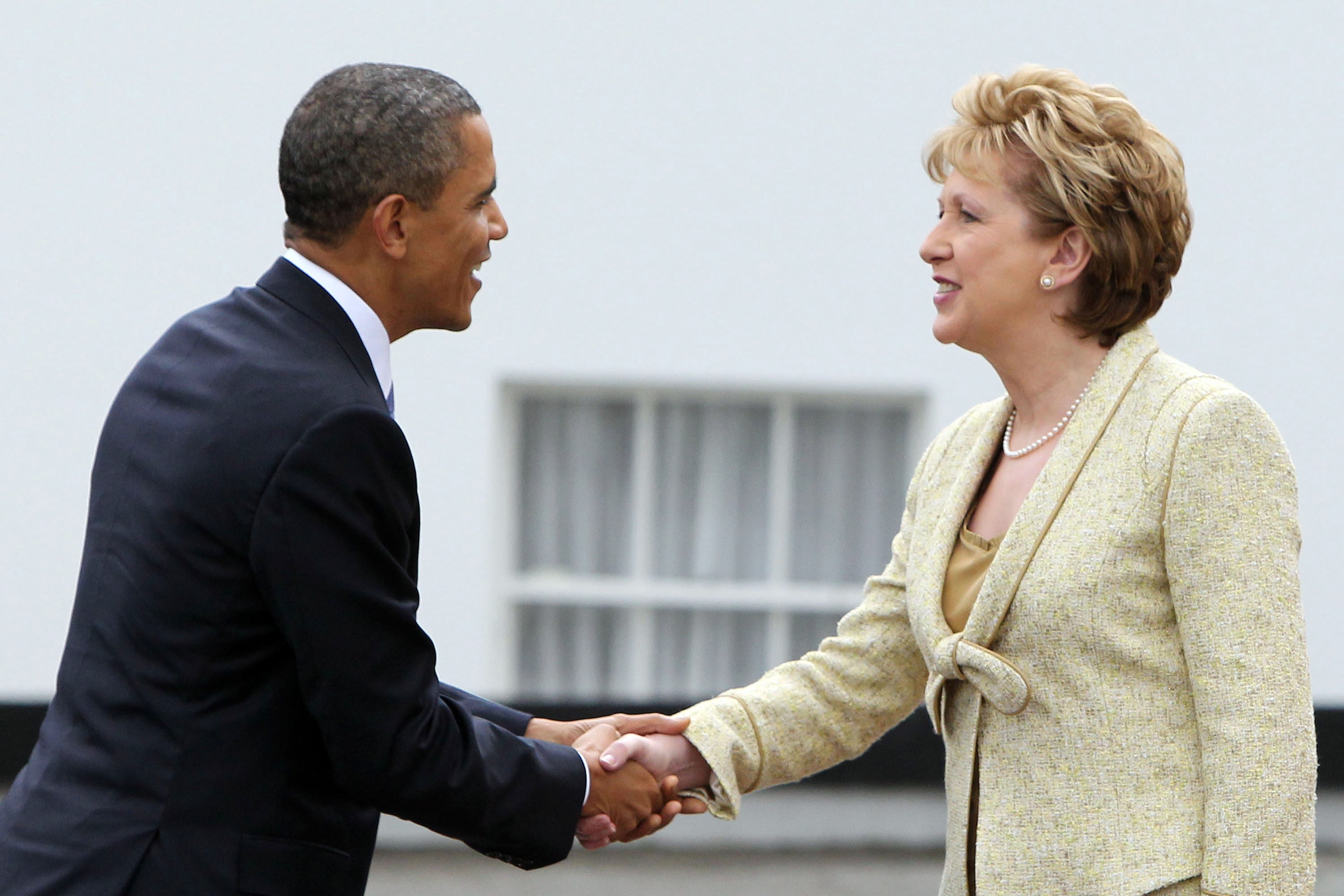 DUBLIN, IRELAND – MAY 23: U.S. President Barack Obama and Irish President Mary McAleese shake hands at Aras an Uachtarain, the official residence of the President of Ireland, May 23, 2011 in Dublin, Ireland. Obama is visiting Ireland for one day. He will meet with distant relatives in Moneygall and speak at a rally in central Dublin after a concert. (Photo by Irish Government – Pool /Getty Images)

Early Baptism breaches fundamental human rights, she said, adding that you cannot impose obligations on little children and then “say to them at seven or eight or 14 or 19 ‘here is what you contracted, here is what you signed up to’ because the truth is, they didn’t.”

McAleese said that the current model of Baptism “worked for many centuries because people didn’t understand that they had the right to say no, the right to walk away.”

Last March, Mrs. McAleese traveled to Rome to speak on International Women’s Day, blasting the Catholic Church for its views on gay marriage and abortion and calling on the Church to eradicate the “toxic virus of misogyny.”

A Church that is “homophobic and anti-abortion is not the Church of the future,” McAleese told participants in the conference, which was organized by the Catholic protest group Voices of Faith and hosted at the world headquarters of the Jesuit order in Rome.

Scheduled to coincide with the socialist-inspired International Women’s Day, the Voices of Faith conference sought to demand a greater say for women in Church governance.

“The Catholic Church is one of the last great bastions of misogyny,” Mrs. McAleese said. “It’s an empire of misogyny.”