U.S. President Donald J Trump has arrived in Britain for a working visit, after having described the country as being “in turmoil”.

Following Prime Minister Theresa May unveiling her ‘soft’ Brexit plans, which resulted in the high-profile resignations of Brexit secretary David Davis and foreign secretary Boris Johnson, the President remarked on Tuesday: “It is going to be an interesting time in the UK… that’s a situation with turmoil.”

He also appeared to criticise Prime Minister May’s Brexit plan at a NATO summit press conference early on Thursday, saying: ” I don’t know if that’s what they voted for.” 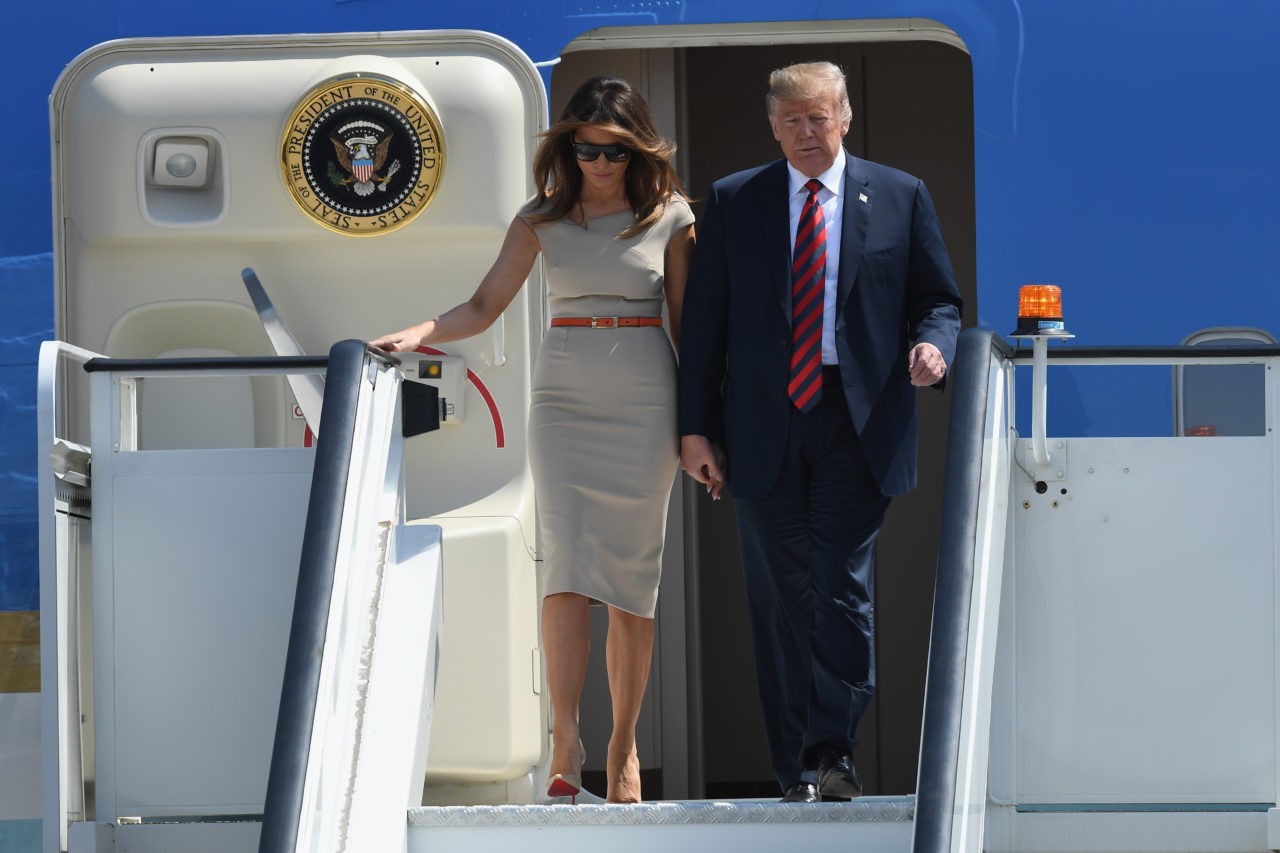 STANSTED, ESSEX – JULY 12: U.S. President Donald Trump and First Lady Melania Trump arrive at Stansted Airport on July 12, 2018 in Essex, England. The President of the United States and First Lady, Melania Trump, touched down in the UK on Air Force One for their first official visit.  (Photo by Leon Neal/Getty Images)

President Trump and the First Lady Melania Trump landed at London Stansted Airport just before 2 p.m. on Thursday for a four-day visit.

He and the First Lady then boarded Marine One and headed to a “meet and greet” at the new U.S. embassy in London, before travelling to Blenheim Palace, Oxfordshire. 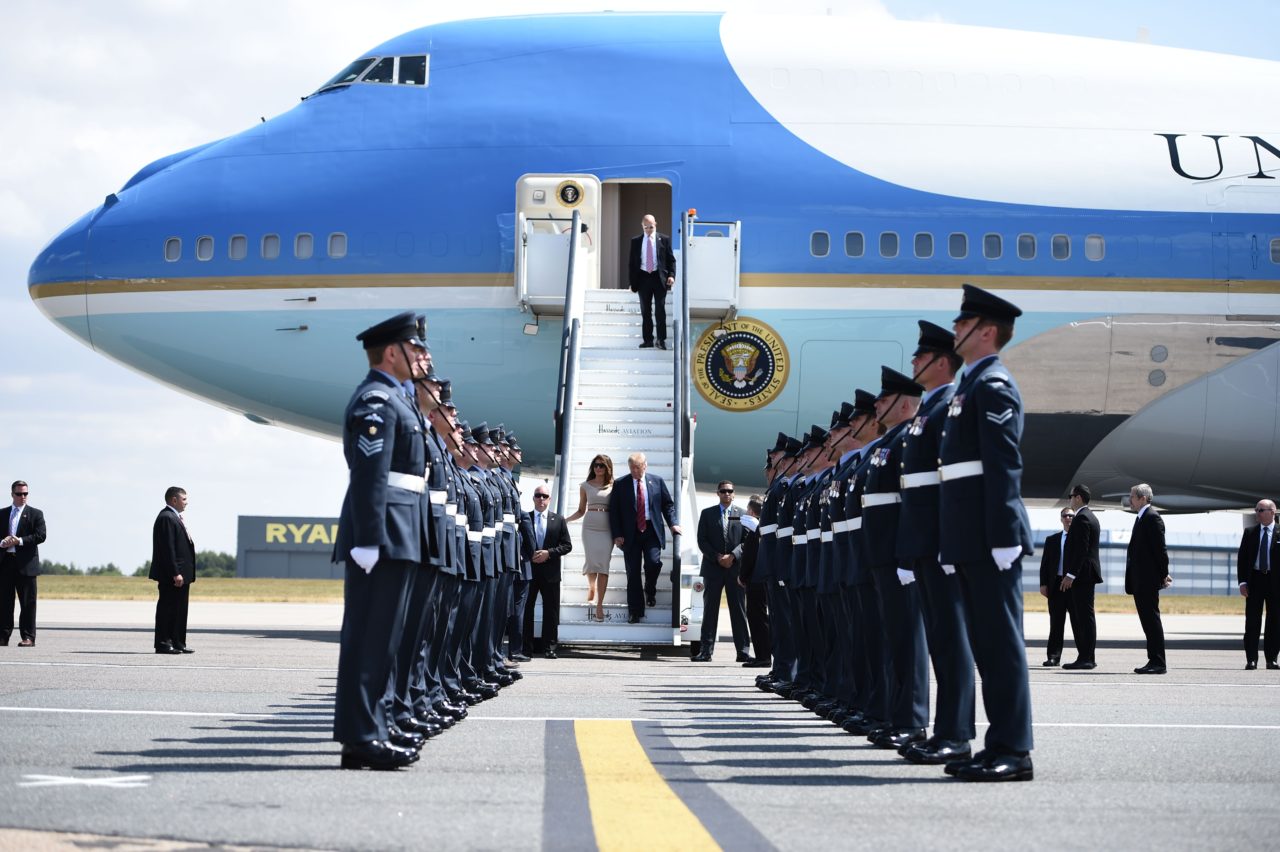 Blenheim Palace is the birthplace of wartime prime minister Winston Churchill, who — an Anglo-American  himself– coined the phrase “special relationship”.

The President reinstalled a bust of Churchill in the oval office shortly after his inauguration and screened the 2017 film Darkest Hour at the White House last winter in a sign of his affinity for the British leader. 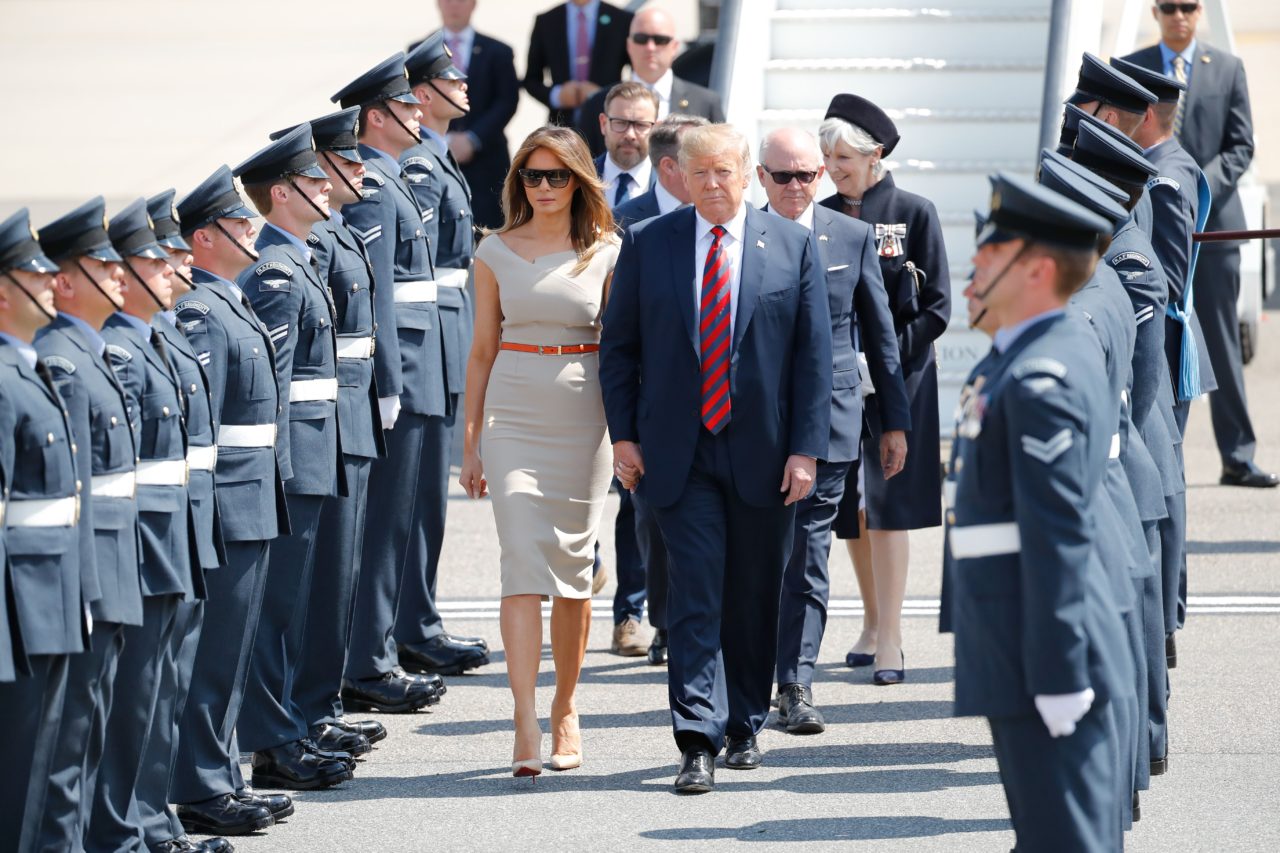 Before the dinner, President Trump will view a military ceremony in the Great Court of Blenheim Palace.

After a black-tie dinner hosted by the Prime Minister, President Trump and the First Lady are due to arrive back at the U.S. ambassador’s residence in Regent’s Park to spend the night. 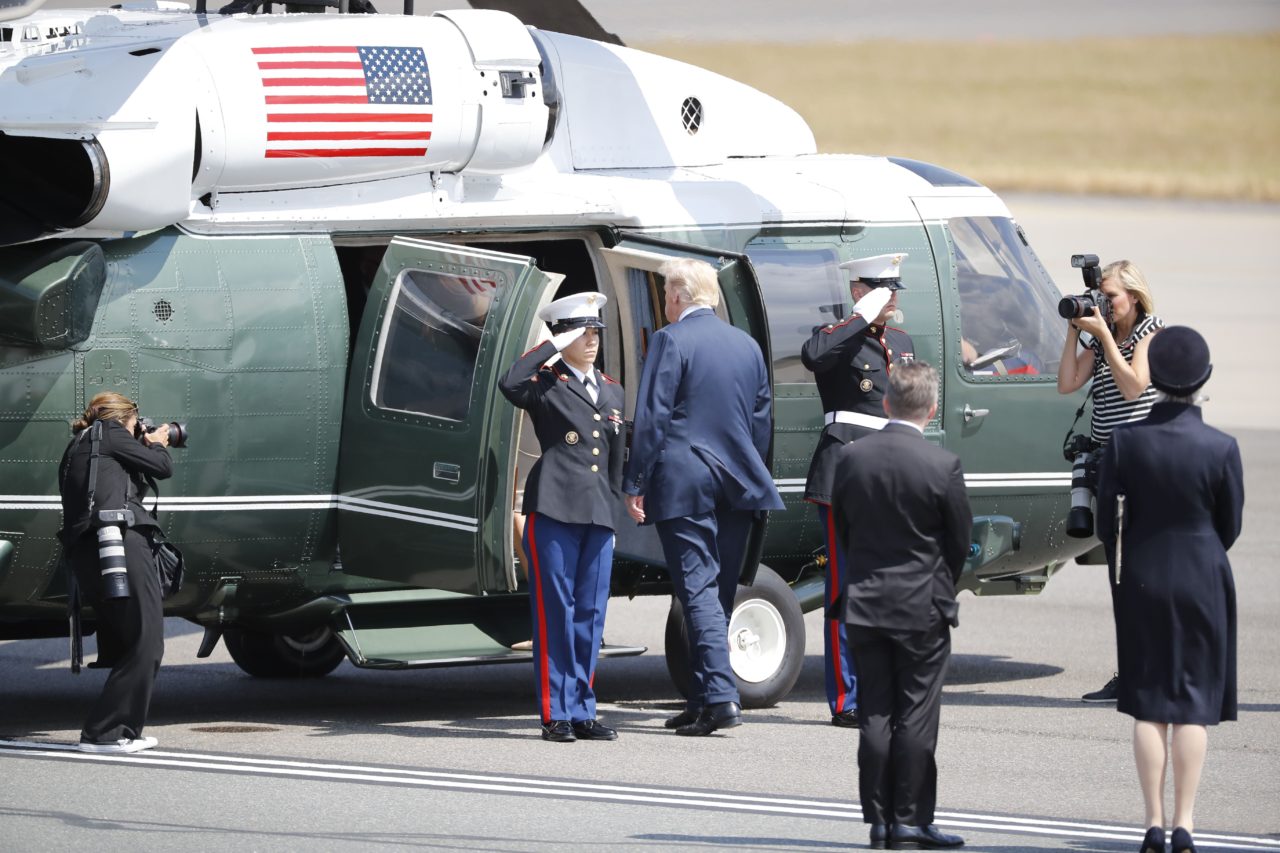 US President Donald Trump (C) boards the Marine One helicopter at Stansted Airport, north of London on July 12, 2018, for transit as he begins his first visit to the UK as US president.  (Photo by Tolga AKMEN / AFP / Getty)

On Friday, the President is due to meet again with the Prime Minister at the Royal Military Academy in Sandhurst, view a demonstration of integrated UK-U/S. military training, and then the  President and Mrs May will head to the Prime Minister’s country retreat, Chequers, for a working lunch.

On Friday afternoon, the President and First Lady are due to meet Queen Elizabeth II at Windsor Castle, and in the evening the couple will leave for Scotland — the birthplace of President Trump’s mother. 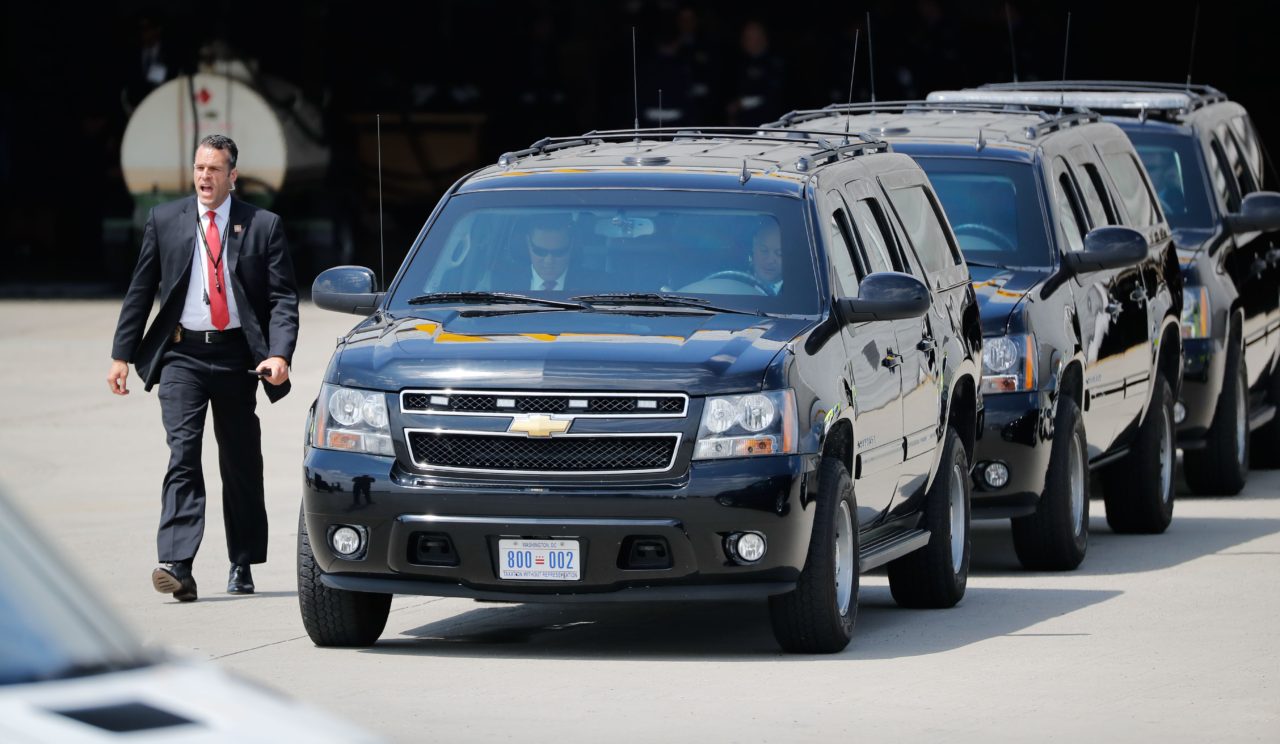 A convoy of US cars sits on the tarmac at Stansted Airport, north of London on July 12, 2018, ahead of the arrival of US President Donald Trump on Air Force One. (Photo credit TOLGA AKMEN/AFP/Getty Images)

Sky News reports that President Trump may play a round or two of golf at one of his two golf courses, and will leave the UK on Sunday for Finland ahead of a summit with Russian president Vladimir Putin scheduled for Monday.

The broadcaster reported that the First Lady may follow her own itinerary at points during the visit, including visiting children, military veterans, and spending time with Mrs May’s husband, Philip. 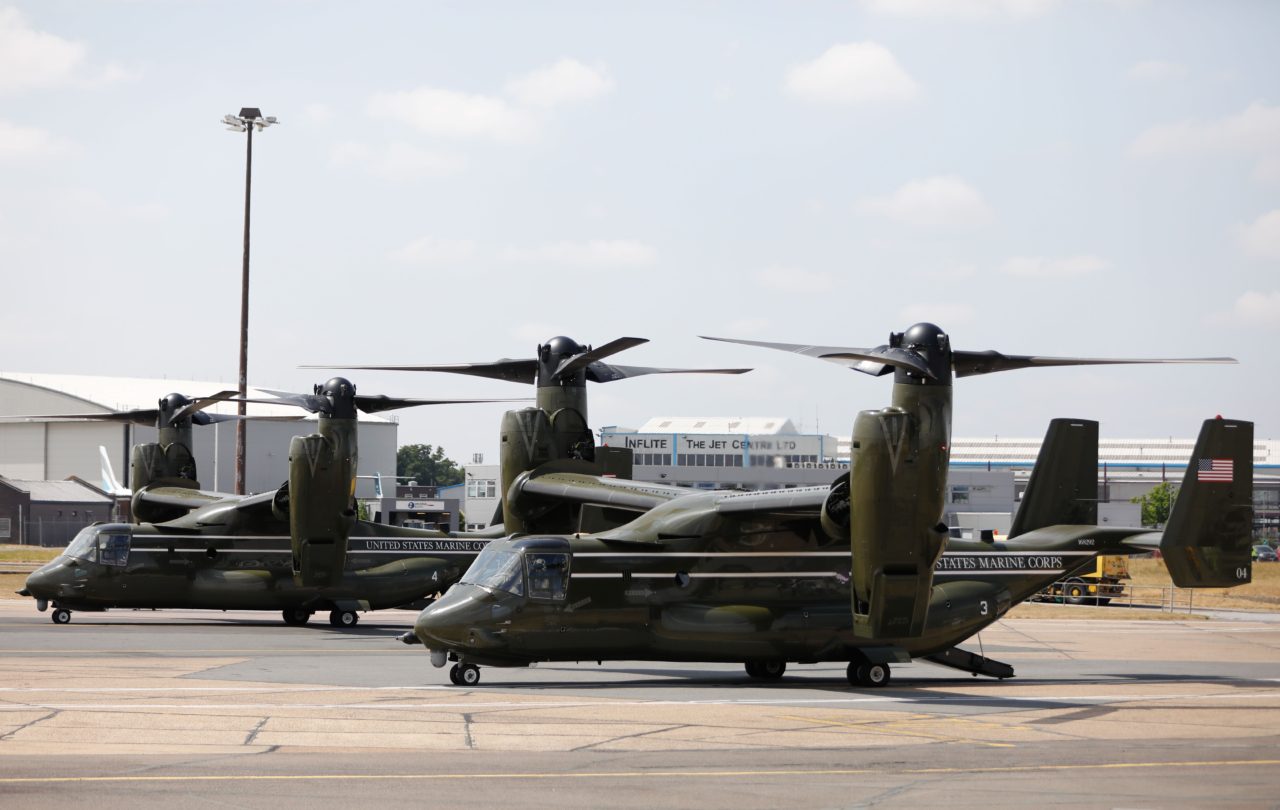 Two US Marine Corps helicopters sit on the tarmac at Stansted Airport, north of London on July 12, 2018, ahead of the arrival of US President Donald Trump on Air Force One. (Photo credit TOLGA AKMEN/AFP/Getty Images)