The proportion of babies born in the UK to a migrant mother has risen to the highest level on record, hitting 75 per cent in some areas of London.

Live births last year in England and Wales to mothers born outside Britain rose to 28.4 per cent, the highest level since records began 50 years ago.

There were more than 192,000 births to mothers born outside the UK, with the top three countries of origin being Poland, Pakistan, and Romania, the Office for National Statistics (ONS) revealed Thursday.

An even higher percentage, 33.9 percent, of babies born in England and Wales had at least one parent born outside the UK in 2017. 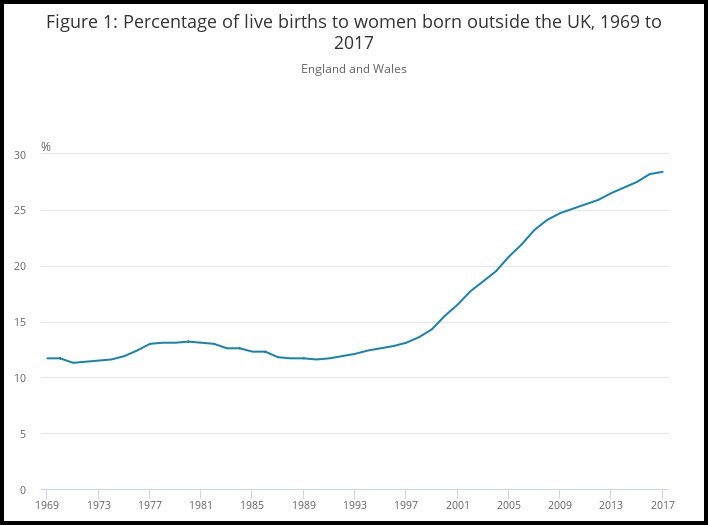 Percentage of live births to women born outside the UK, 1969 to 2017. (Source: Office for National Statistics)

Pakistan has been the most common country of birth for fathers born outside the UK since figures were first produced in 2008, with 10.2 percent of foreign-born new fathers in 2017 born in Pakistan.

Poland has been the most common country of birth for mothers born outside the UK since 2010, with 10.8 percent of foreign-born mothers in 2017 born there.

More than three-quarters of births in Brent, northwest London, were to mothers born outside the UK, the highest in England and Wales.

The borough of Redcar and Cleveland, in North Yorkshire, had the lowest proportion of babies born to migrant mothers, at 3.7 percent.

Nicola Haines, of the Vital Statistics Outputs Branch at the ONS, commented: “Just over a third of the babies born in England and Wales in 2017 had at least one parent who had been born outside the UK.

“This will include parents who moved to the UK as children and have lived here most of their lives as well as those who have recently migrated.

“The proportion of live births to non-UK-born parents has been growing since 1990 and is now the highest on record.

“Our birth statistics also show that, since 1975, babies born to mothers aged 45 years and over have been most likely to have a mum who was born outside the UK.

“This is influenced by the proportion of non-UK-born women of childbearing age in the population, which is higher at ages 30 years and over than at younger ages.”

The ONS also revealed Thursday that around 610,000 migrants came to the UK in the year ending March 2018, with “long-term net migration” increasing and continuing to add huge numbers to the UK population.

However, immigration from the European Union (EU) has continued to fall two years after the Brexit vote, hitting the lowest level since 2012.

A study from the Migration Watch pressure group published Wednesday claimed that in the 15 years between 2001 and 2016, an average of 82 percent of UK population growth has been down to migrants and the children of migrants.