In the third straight week of protests by the Gilets Jaunes (Yellow Jackets) movement, hundreds of protestors were arrested as violence and arson took place across the country with smoke blanketing the Paris skyline in what has been called an “insurrection”.

While protests took place across France, much of the violence and arson took place in the French capital in what was seen as a further escalation of violence from the previous protest last Saturday.

According to French broadcaster BFMTV, more than 287 people were arrested in Paris alone, many of them arrested at the Place de l’Étoile/Place Charles De Gaulle, the location of the iconic Arc de Triomphe where much of the clashes between members of the police and the Yellow Jackets took place. 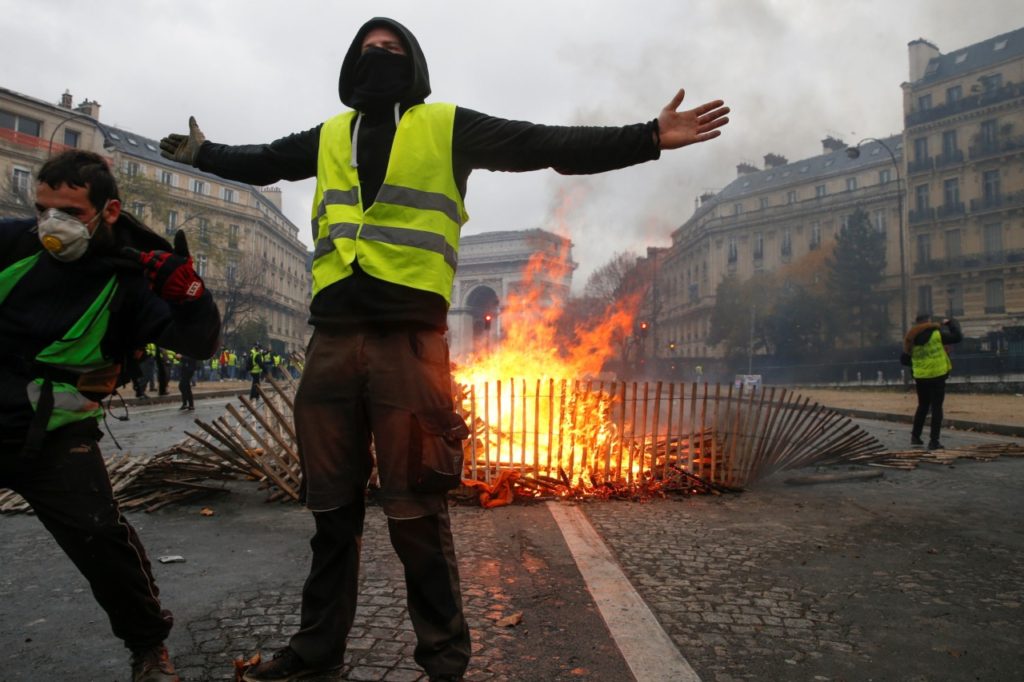 A demonstrator opens his arms in front of a fire during a protest of Yellow vests against rising oil prices and living costs, near the Arc de Triomphe in Paris, on December 1, 2018.  (Photo: GEOFFROY VAN DER HASSELT/AFP/Getty Images)

Much of the violence has been blamed on vandals, called “casseurs” in French, who are believed to come from a variety of backgrounds including far-left anarchists, far-right extremists, and petty criminals from the heavily migrant-populated suburbs surrounding the French capital.

Some of the protestors caused controversy for spraypainting graffiti on the Arc de Triomphe itself, with some calling it evidence that those behind it were likely far-left extremists with some of the graffiti stating “the ultra-right will lose” and “Justice for Adama” — a reference to the 2016 death of Adama Traoré, who activists claim was murdered by a Gendarmes officer.

Later in the day, a group of casseurs also set fire to a building near the iconic monument, which was not the only arson attack as 190 fires in total were dealt with during the day by Paris firefighters including six buildings set aflame altogether.

While there were no confirmed reports of fatalities, 110 people in total were wounded in the day-long violence, including 17 police officers. One of the most seriously injured was a man who lost several fingers on his hand due to the explosion of a pyrotechnic device.

Arson attacks also took place in other cities across France, most notably in the department of Haute-Loire where protestors set the local prefecture building on fire after one protester allegedly threw a molotov cocktail through the window.

French interior minister Christophe Castaner reacted to the escalation of violence saying he has been monitoring the situation closely and has no “taboo” over declaring a national state of emergency should the need arise.

Castaner also told French media that authorities had identified at least 3,000 suspects connected with the various arson attacks and violence that took place.

“There are people who come from the extreme right, the extreme left, but there are also many people who came to Paris to vandalise,” Castaner said, and added that they were an “extreme minority, an insurrectional minority, they want to break everything, destroy everything. They are basically hooligans.” 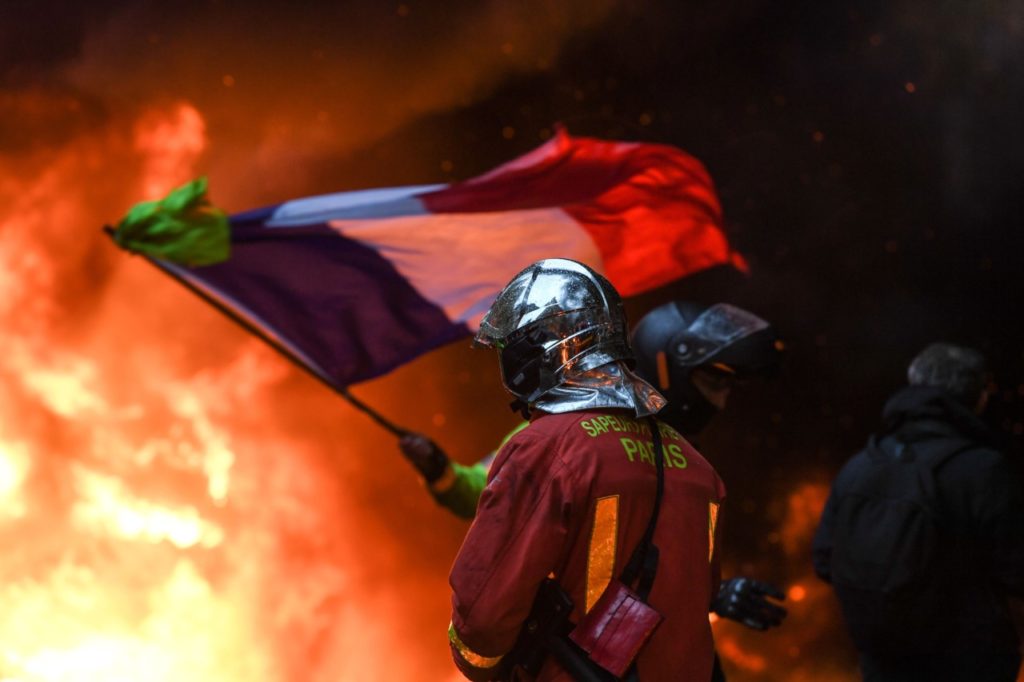 A French firefighter walks towards flames as a Yellow vests demonstrator waves the French flag during protests against rising oil prices and living costs in the French capital Paris on December 1, 2018. (Photo: ALAIN JOCARD/AFP/Getty Images)

The word “insurrection” was also used by populist Rassemblement National (National Rally) leader Marine Le Pen, who took to Twitter to condemn the violence, saying: “The casseurs triggered an insurrectionary situation in Paris. Dear Gilets Jaunes, you should leave the premises in order to allow the forces of the order to intervene and overcome these abuses.”

Ms Le Pen also called on President Emmanuel Macron to meet with leaders of the opposition parties in order to work on a resolution to the violence upon his return from the G20 summit in Argentina.

“I ask the President of the Republic, who has let this situation get worse in an incredible way, to receive the leaders of opposition political parties, at the forefront of which is the Rassemblement National, upon his return from Argentina,” she wrote.