Three were killed and 12 injured in a shooting in the vicinity of the Christmas Market in the historic French city of Strasbourg Tuesday evening.

A “major public safety event” was underway Tuesday evening, according to the French ministry of the interior, after shots were fired in Strasbourg, the French city which serves as one of the two homes of the European Parliament. The ministry instructed local residents to stay in their homes.

The Associated Press reports of the latest on this ongoing hunt for the suspected Strasbourg attacker:

A senior French government official says that five people have been detained as police hunt for the man who attacked the Strasbourg Christmas market, but the gunman remains at large.

Laurent Nunez, secretary of state for the interior ministry, said Wednesday on France-Inter radio that the attacker could have fled to neighboring Germany.

He said that three people were killed and 13 injured, eight of them seriously. He denied reports of a police intervention at the city’s famed cathedral but said the search for the attacker is constantly evolving.

Nunez said the assailant had been identified as a suspected extremist during his past stays in prison but said the motive for the attack remains unclear. A terrorism investigation was opened.

Aspects of Tuesday’s attack bear a passing resemblance to the 2016 Berlin Christmas market attack, which saw police only monitor known radical Anis Amri “sporadically“. After the attack which saw 12 killed and around 100 injured at the city Christmas Market, Amri was able to flee police and escape the country.

The killer was shot dead in Italy days later when he was recognised by a pair of patrolling policemen. Germany was to award medals to the officers for bravery in killing the terrorist, however declined to do so after it emerged the men had hard-right political views.

France’s interior minister Christophe Castaner says a gunman “sowed terror” in three parts of the eastern city of Strasbourg with a shooting spree that killed three people and left six others with serious injuries, according to the Associated Press.

Earlier police union officials had said four people were killed. Officials did not explain the reason for the conflicting death tolls.

Castaner said early Wednesday that some 350 security officers and two helicopters are involved in the search for the assailant after the Tuesday night attack.

The top French official told reporters that France is raising its terror alert level to “Attack Emergency,” its highest level, and sending security reinforcements to Strasbourg. At the same time, he said the city is lifting its confinement order after hours of lockdown in multiple neighborhoods.

At least three people were killed and 12 injured in a shooting at a Christmas market in central Strasbourg on Tuesday, the top French government official tells reporters.

Strasbourg police are starting to release thousands of people confined in buildings in the area of a deadly terrorist attack near the French city’s Christmas market, according to the Associated Press.

An Associated Press photographer was among about 5,000 people in a basketball stadium at the time of the Tuesday night shooting when everyone was ordered to lock down and stay inside. He described stupefaction among the crowd, which included some families.

Police started letting them out some five hours later, in groups of about 100. A police helicopter is circling overhead, and entire neighborhoods of the city remain cordoned off.

The shooter is still at large. A terrorism investigation is underway.

“The entire nation stands in solidarity with the victims and their families of Strasbourg,” the French president tweets.

.@UdoBullmann calling on @EP_President to not evacuate MEPs first but to make sure that all #EP staff is also evacuated at the same time. Solidarity matters to all and not the few! #strasbourg attack @TheProgressives pic.twitter.com/hhG3CLawmY

Strasbourg Mayor Roland Ries says the gunman behind the fatal shootings near the French city’s Christmas market got inside a security zone to stage the attack, per the Associated Press. Appearing on BFM television, Ries reveals that about 100 people still are locked down in restaurants and other buildings in the area late Tuesday. The gunman is still at large, yet reportedly wounded.

The mayor lamented that a “catastrophe” occurred despite what he called “draconian security measures” around the market since the terrorist attacks in Paris three years ago. He said it was unclear how the attacker entered the “interior of the [security] bubble.”

A terrorism investigation was opened while the motive for the attack is unclear.

UPDATE 0:01 GMT — The mayor of Strasbourg makes a somber announcement

Mayor Ronald Ries says that all sites related to the city’s “Capital of Christmas” program, including the Christmas market, will be closed Wednesday. The mayor has yet to decide whether schools will close.

A witness in France has told the BBC that one of the people shot and killed in the city of Strasbourg was a Thai tourist who suffered a head wound and didn’t respond to efforts to revive him, according to the Associated Press.

Peter Fritz said after the gunfire near a Christmas market: “We tried our best to resuscitate him. We applied CPR. We dragged him into a restaurant close by.” He says the man was in his 30s and his wife appeared to be unharmed but in shock. Fritz says it took more than 45 minutes for an ambulance to arrive. He said an emergency doctor advised by telephone “that any further efforts would be futile.” Further, Fritz said of the victim: “He is still here in this restaurant but we have abandoned all hope for him.”

Residents of central Strasbourg describe hearing a series of gunshots and screaming in the street during an attack near a Christmas market that killed four people, the Associated Press reports.

Resident Yoann Bazard said by telephone he heard “two or three shots” and the screams before he went to a window and saw people running Tuesday night. The 27-year-old said: “After that I closed the shutters. Then I heard more shots, closer this time.”

Bazard continued: “There were two or three episodes like that….As it got close, it was really shocking. There were a lot of screams.”

Freelance journalist Camille Belsoeur says he was at a friend’s apartment on the same street and at first mistook the gunfire for firecrackers. Belsoeur said: “We opened the window. I saw a soldier firing shots, about 12 to 15 shots.”

He says other soldiers yelled for people to stay indoors and shouted ‘Go home! Go home!’” to those outside.

UPDATE 22:15 GMT — Questions asked over the effectiveness of French police

After revelations that the suspect was due to be arrested by French police Tuesday morning but when officers arrived at his home he wasn’t it, suggesting a serious failure in police intelligence. It may be the failed arrest alerted the suspect — who is known to have been radicalised, but not for which ideology — to the fact the security services knew about his activity, prompting the attack.

The facts as known so far prompted centre-right Republicans party leader Laurent Wauquiez to ask: “How many attacks committed by [radicalised individuals] must we undergo before adapting our fight against terrorism? What are we waiting for, to finally fight to eradicate the fundamentalism that has declared war [against us]?”

Following an earlier report from French media which stated the attacker had been injured by Operation Sentinelle soldiers, Le Figaro now reports the 29-year-old male has been surrounded by police, having proceeded on foot. The individual is understood to be known to police and is the subject of an ‘S’ file — French police slang for an individual who has been under investigation for radicalisation in the past.

Another update from Agence France Press who report the investigation has now been taken over by the Paris counter-terrorism police. The wire service also reports police sources who state the attacker was wounded by French army soldiers deployed as part of operation Sentinelle before fleeing.

The security services are out in force in Strasbourg Tuesday evening, as these images from Getty attest: 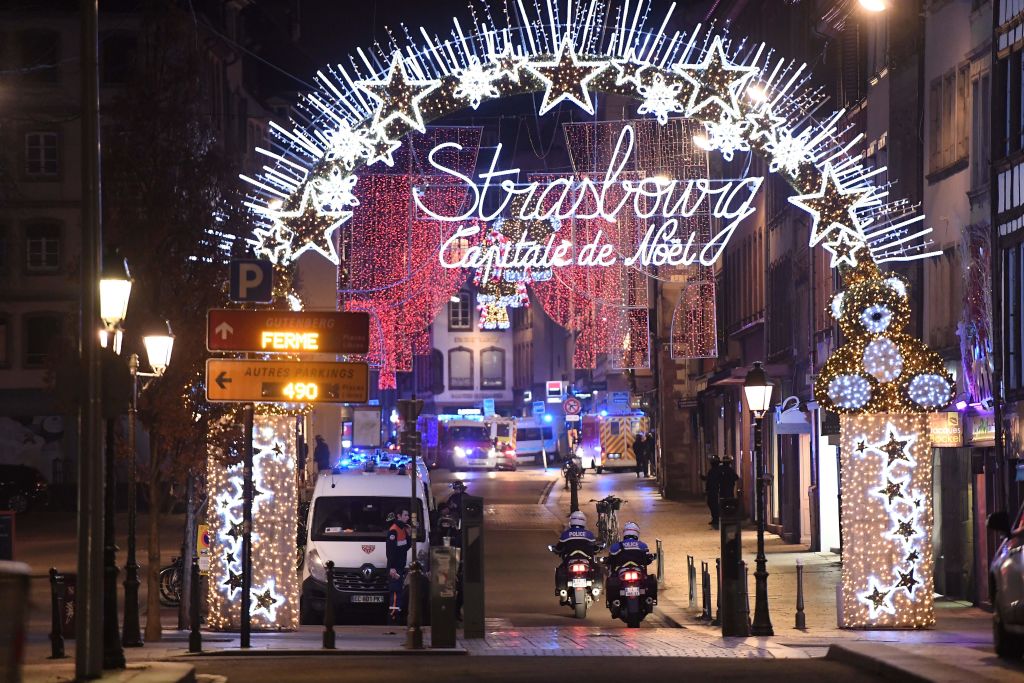 Police motorcycles drives in the streets of Strasbourg, eastern France, after a shooting breakout, on December 11, 2018. – One person has been killed and ten people injured in a shooting today near a Christmas market in the eastern French city of Strasbourg, police said, adding that the suspected gunman was on the run. (Photo by Frederick FLORIN / AFP) (Photo credit should read FREDERICK FLORIN/AFP/Getty Images) 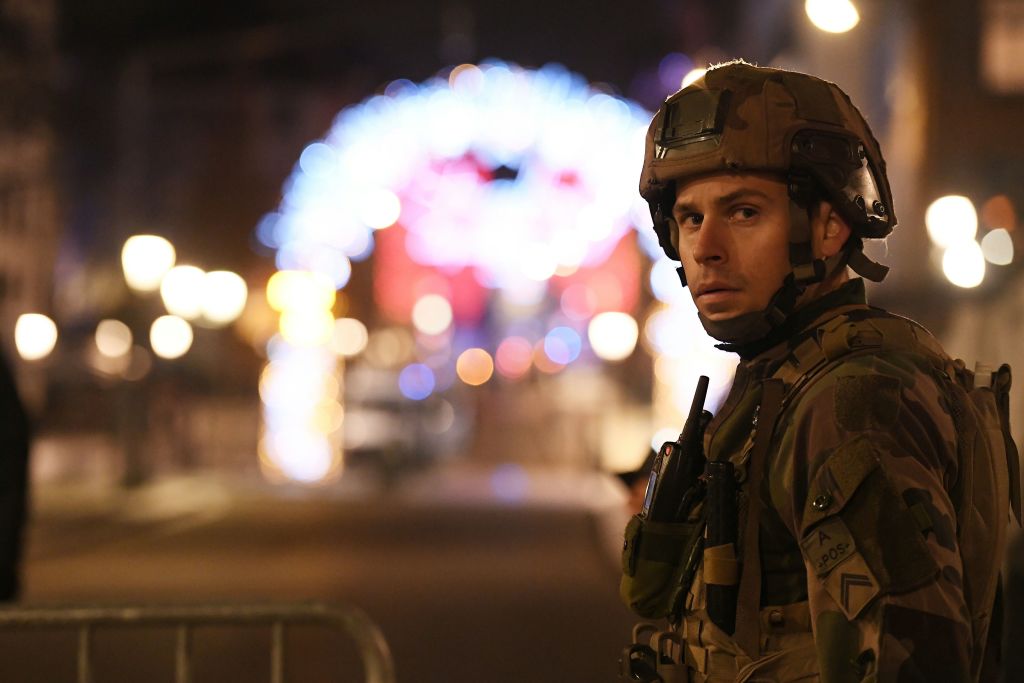 A military looks on in the streets of Strasbourg, eastern France, after a shooting breakout, on December 11, 2018. – One person has been killed and ten people injured in a shooting today near a Christmas market in the eastern French city of Strasbourg, police said, adding that the suspected gunman was on the run. (Photo by Frederick FLORIN / AFP) (Photo credit should read FREDERICK FLORIN/AFP/Getty Images) 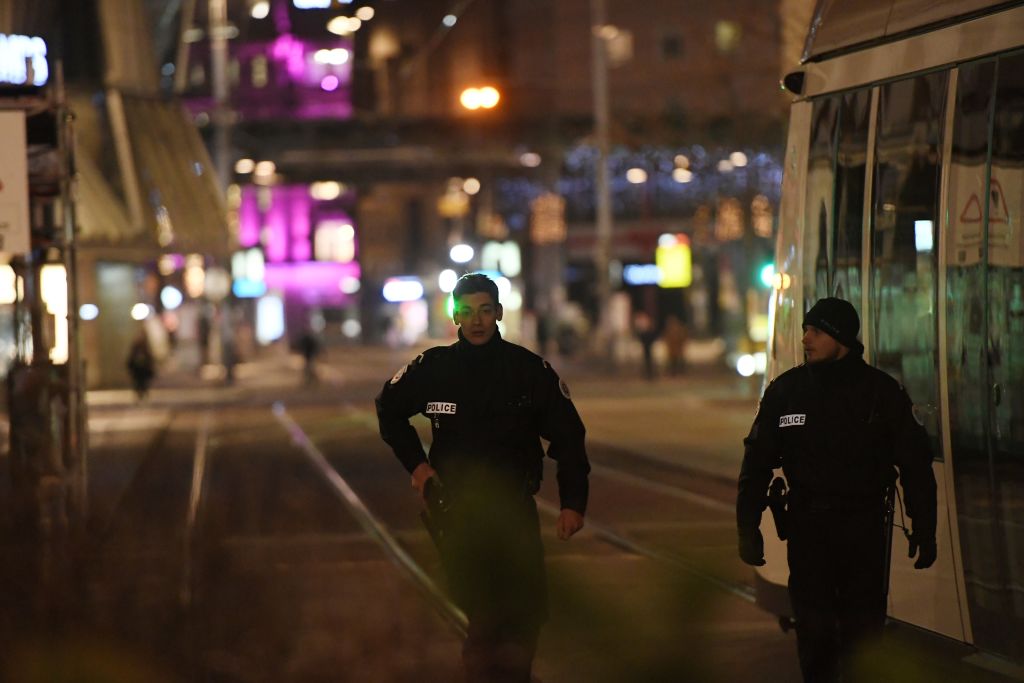 Policemen walk in the streets of Strasbourg, eastern France, after a shooting breakout, on December 11, 2018. – One person has been killed and ten people injured in a shooting today near a Christmas market in the eastern French city of Strasbourg, police said, adding that the suspected gunman was on the run. (Photo by Frederick FLORIN / AFP) (Photo credit should read FREDERICK FLORIN/AFP/Getty Images) 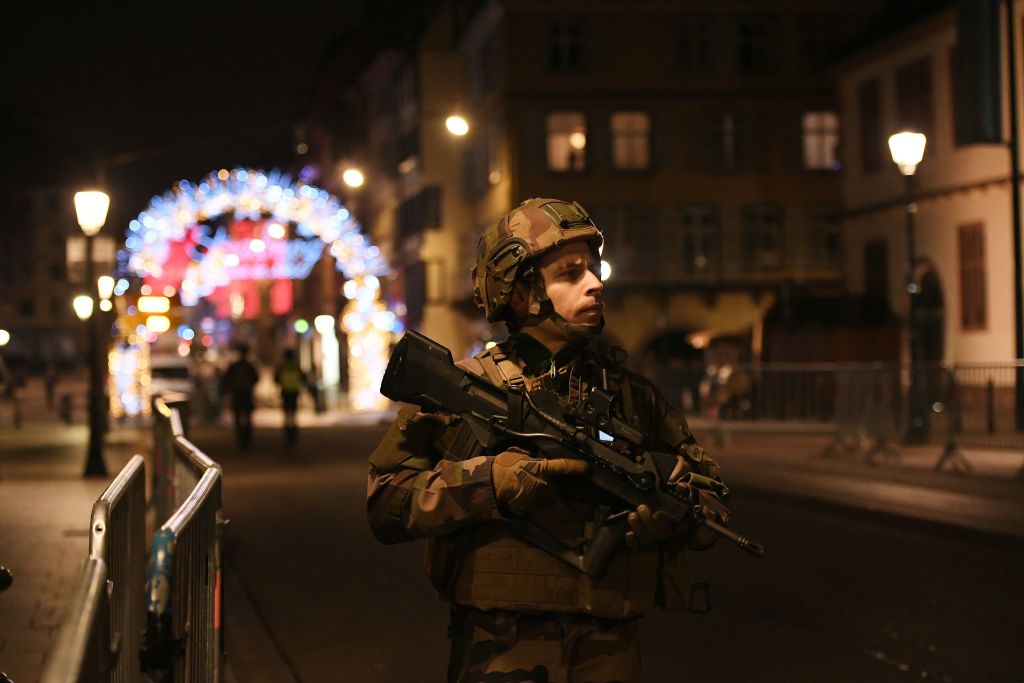 A military stands in the streets of Strasbourg, eastern France, after a shooting breakout, on December 11, 2018. – One person has been killed and ten people injured in a shooting today near a Christmas market in the eastern French city of Strasbourg, police said, adding that the suspected gunman was on the run. (Photo by Frederick FLORIN / AFP) (Photo credit should read FREDERICK FLORIN/AFP/Getty Images)

Wire service AFP now reports that two have died and 11 were injured in the Strasbourg shooting, and that police are investigating a potential terror motive.

France info reports the number of injured has risen to ten, and a knife, as well as a firearm, was involved in the attack according to cited sources “close to the investigation”. Police have now identified the shooter but not made that information public.

As reported by employees live tweeting the shooting from within the European Parliament in Strasbourg, the assailant is still at large France’s Le Figaro now reports. The newspaper also claims the number of people injured in the shooting has now risen to six.

Reports circulating on social media that there has been more than one fatality in Strasbourg and even multiple shooters have not been confirmed by French authorities, or even reported in the French press.

Read the original story below

No further details including the status of the shooter have been yet released by authorities.

The French fire brigade confirmed that one had been killed in the shooting, which Le Figaro reports may have involved an automatic weapon, with early reports conflicting over how many were injured, with claims in French media ranging from three to nine.

The shooting took place by the Place Keber square, by the city’s annual Christmas market.

European Parliament has activated emergency protocol. We are currently in lockdown to safeguard people here. Stay safe and inside. #Strasbourg #Terrorism https://t.co/WcOYqx11X4

British state broadcaster the BBC cites a local journalist who reported a dozen shots having been fired.

Unverified videos uploaded to the Twitter microblogging platform showed residents running and screaming in fear, and injured people lying on the city pavements.

Several staff members of the European Parliament in the city have also taken to Twitter to describe the scene, with press officer Emmanuel Foulon reporting to have heard “the sound of shots”, and to have been told by security that the shooter is still at large.