France has seen a wave of radical Islamic terrorist attacks since 2015, leaving hundreds of dead and injured with little end in sight.

Before 2015, France had seen a small number of Islamic terrorist attacks, such as the Toulouse and Montauban shootings in 2012 in which Islamic radical Mohammed Merah killed seven people and wounded five others, including a Rabbi and three children.

Just years later, another terrorist attack, on the offices of the satirical magazine Charlie Hebdo, would usher in a wave of Islamist-inspired attacks year on year to today, when a Tunisian migrant killed three people in a church in the city of Nice.

Developing: At least three have been killed in a 'terror attack' at the Church of Notre Dame in Nice, France https://t.co/GFYufaL9Du

In January of 2015, the world was shocked when two radical Islamist brothers, Saïd and Chérif Kouachi, stormed the officers of Charlie Hebdo and gunned down and murdered twelve people, most of the victims being employees of the publication.

The claimed motivation behind the attack by the two men, who swore allegiance to the Al-Qaeda terrorist group, was the prior publication of cartoons of the Islamic prophet Mohammed as depictions of Mohammed are forbidden in Islam. 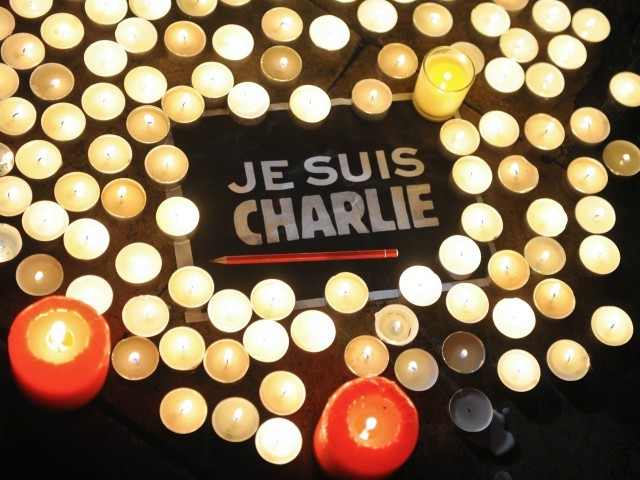 The publication of the cartoons came years after Danish newspaper Jyllands Posten had published their own depictions of the Islamic prophet and had also received death threats from extremists.

The Charlie Hebdo attack was also followed immediately by another attack at a Jewish Kosher supermarket in Paris in which Amedy Coulibaly, a close friend of the Kouachi brothers, took eighteen hostages and killed four before police stormed the shop and killed Coulibaly.

In April, French dance instructor Aurélie Châtelain was murdered by French-Algerian jihadist Sid Ahmed Ghlam, who was said to have been attempting to carry out a terrorist attack against churches in Villejuif.

June of that year saw one of the first attacks linked to the Islamic State terror group when terrorist Yassin Salhi, who worked as a delivery driver, beheaded his employer and made attempts to blow up a local factory in Saint-Quentin-Fallavier with gas canisters. 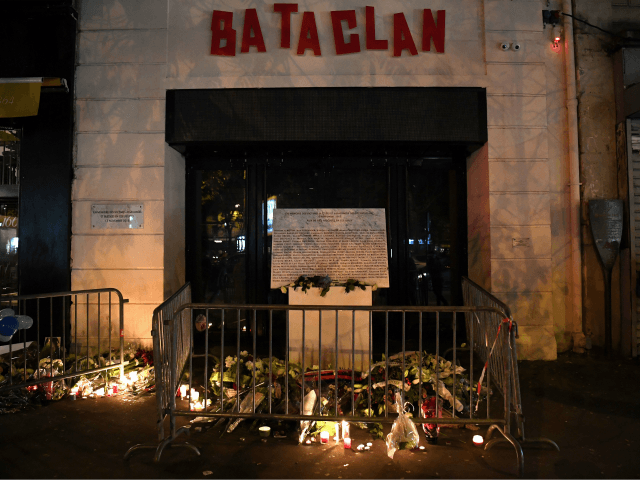 In November of 2015, France suffered the most deadly terrorist attack it has yet seen when Islamic State terrorists launched multiple attacks across Paris, culminating in a massacre at the Bataclan night club which, in total, left 130 victims dead, seven attackers dead and 413 people injured.

The attack was the deadliest single attack in France since the Second World War and such a coordinated attack has not been seen since.

The Islamic State took credit for the attack, stating that it was in retaliation for French airstrikes against the group in Syria.

In 2016, France saw five terrorist attacks, but two were carried out without casualties. the most deadly occurred in the city of Nice on July 14th when Tunisian migrant Mohamed Lahouaiej-Bouhlel purposely drove a large truck down the Promenade des Anglais during Bastille Day celebrations before being shot and killed by police.

The attack left 86 people dead and 434 people wounded and the Islamic State once again took credit for the terrorist attack stating, “The person who carried out the operation in Nice, France, to run down people was one of the soldiers of Islamic State.” 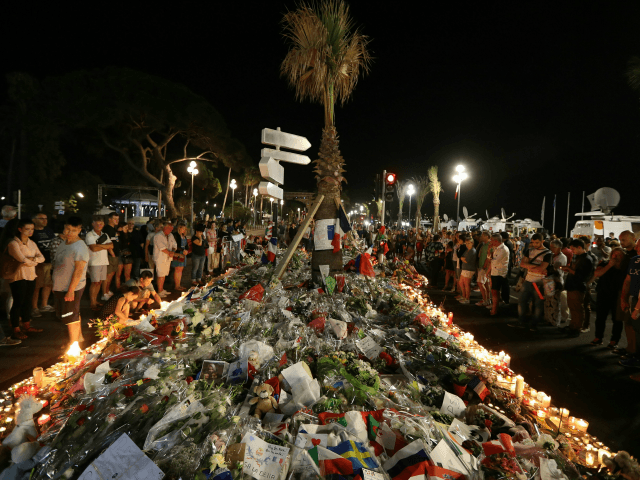 This photo taken on July 16, 2016 in Nice shows a make-shift memorial for victims of the deadly Bastille Day attack. (Photo:  VALERY HACHE/AFP/Getty Images)

Just days later on July 26th, the Islamic State took credit for another terrorist attack when Roman Catholic Priest Father Jaques Hamel was stabbed and beheaded while giving mass at a church in Normandy. His final words were said to have been: “begone Satan!”

Father Hamel was later declared a martyr by Pope Francis who condemned his murder as the work of Satan. 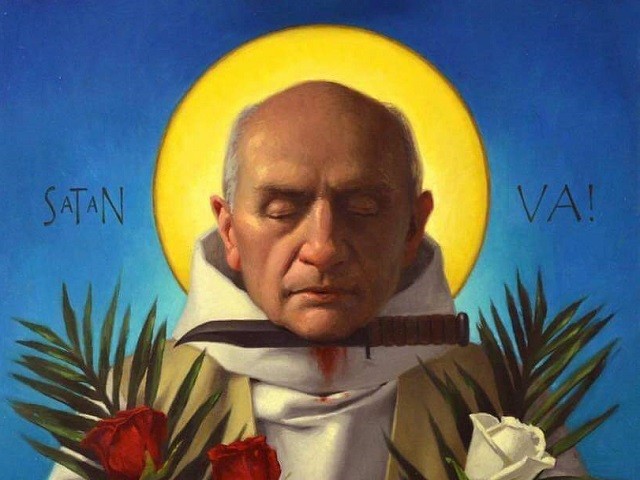 While 2017 saw nine terrorist attacks, there were far fewer deaths and injuries as many of the attacks were improvised lone wolf attacks such as the February Louvre attack that left one soldier injured and the June Notre Dame attack by an Algerian migrant who had previously won European Union prizes for journalism.

Of the nine terror attacks, two saw terrorists commit murder. The first took place during the French presidential elections and occurred as a debate between the candidates was underway.

One police officer was killed on the Champs Elysee and two injured in Paris by Karim Cheurfi, who was later shot dead by police.

The second attack took place on October 1st and saw a man stab a woman and a 17-year-old girl to death in a train station in the city of Marseilles. Islamic state again claimed responsibility.

There were three terrorist attacks in 2018, but all three were deadly. The first in Trebes saw an Islamic State terrorist kill four people including French police officer Lt. Col. Arnaud Beltrame who allowed himself to be taken hostage in exchange for other hostages to be set free.

Following his death, Beltrame was honoured as a hero in France and given a state funeral and memorial service by French President Emmanuel Macron. 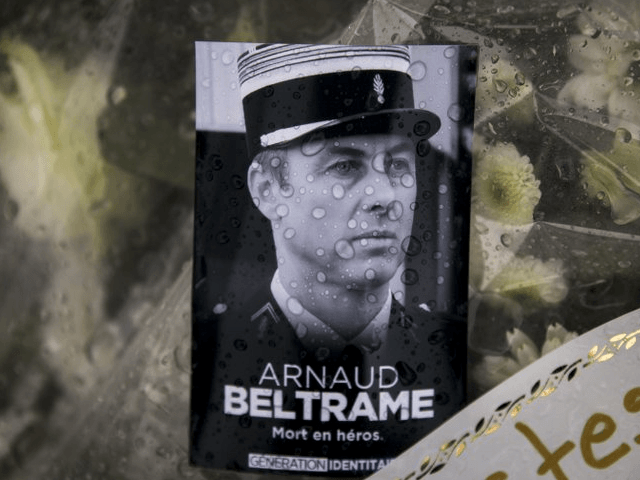 A photo of Lieutenant Colonel Arnaud Beltrame placed on a bunch of flowers at the main gate of the Police headquarters in Carcassonne, France, Saturday, March 24, 2018, following an attack on a supermarket in Trebes in the south of the country on Friday. (AP Photo/Emilio Morenatti)

In May, Chechen-born Khamzat Asimov stabbed several people in Paris, killing one and injuring four others after some experts warned of the dangers of radicalised Chechen migrants.

The final attack in 2018 left five people dead in the city of Strasbourg and injured eleven others. The attack, which took place just outside the city’s Christmas Market, saw radical Islamic extremist Chekatt Cherif open fire on a crowd near the market.

Cherif’s attack was compared to the 2016 terrorist attack that took place in Berlin and saw Tunisian failed asylum seeker Anis Amri drive a truck through the Christmas Market in the same style as the 2016 Nice attack.

Like 2018, 2019 saw three terrorist attacks in France and with one of them leading to casualties. The first saw an inmate at the Conde-sur-Sarthe prison stab and injure two guards with a knife that was thought to have been smuggled in by his female partner who was visiting him that day.

Eight people were injured in the city of Lyon in May when a bomb comprised of nails, screws and bolts exploded on Victor-Hugo Road. 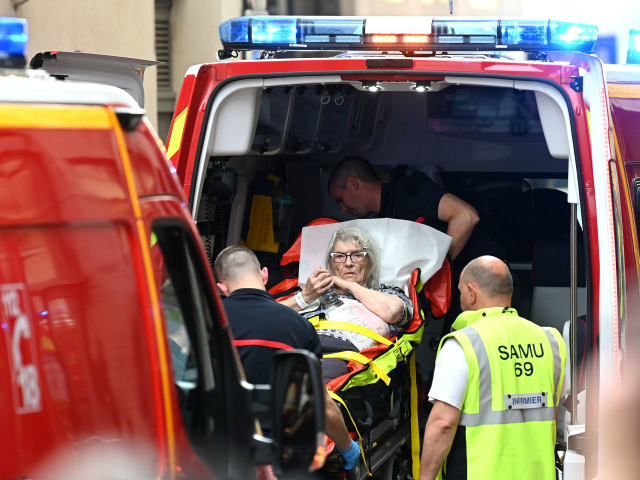 President Emmanuel Macron later labelled the incident an attack and said, “There was an attack in Lyon… there are no fatalities. There are wounded, so I obviously want to have a thought for the wounded, their families.”

Harpon stabbed four people to death including his supervisor before he was fatally shot.

So far this year, France has seen an estimated nine terrorist attacks and all but three have involved fatalities. In January a Salafist named Nathan C. stabbed three people in Vileljuif, killing one and injuring the two others.  The commune had previously seen another terror attack in April of 2015.

On April 4th in Romans-sur-Isère, a Sudanese migrant yelling “Allahu Akbar!” stabbed two people to death and wounded at least seven more. Several other migrants were later arrested in connection to the attack.

In September of this year, Charlie Hebdo made the move to republish the controversial Mohammed cartoons as the trial for the 2015 terrorist attack against their office began.

The republishing of the cartoons was claimed as the motivation behind a stabbing attack outside the former offices of Charlie Hebdo by an 18-year-old Pakistani migrant who later confessed to the attack.

The Mohammed cartoons were also involved in the beheading of teacher Samuel Paty who was killed in the street by a Chechen teen Islamic radical just two weeks ago after the had shown pictures of the cartoons to his class as part of a lesson on free expression.

The murder of Paty has led to the Macron government vowing to crack down on Islamist-link groups and dissolve them and has brought he country into tensions with Islamist-led countries like Turkey. 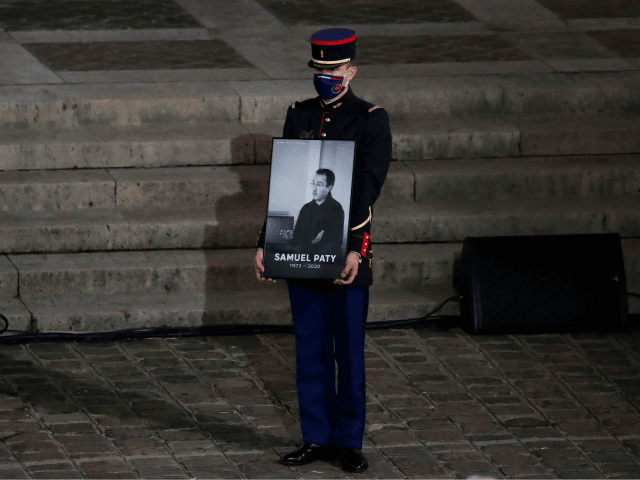 A French Republican Guard holds a portrait inside Sorbonne University’s courtyard in Paris on October 21, 2020, during a national homage to French teacher Samuel Paty, who was beheaded for showing cartoons of the Prophet Mohamed in his civics class.(Photo: FRANCOIS MORI/POOL/AFP via Getty Images)

This week’s attack at a church in Nice, by a Tunisian illegal immigrant, comes just weeks after Paty’s murder and bears similarity to prior Islamist attacks targeting church-goers.

In the last five years, radical Islamic terrorism has led to the deaths of at least 264 people in France and led to at least 956 injuries. Among the victims have been priests, rabbis, men, women and children.

The nation evidently anticipates more. France is presently on a high level of alert, with a senior police officer warning this week of a heightened risk of Islamic terrorism, with messages disseminate by extremist groups calling for attacks in France. The number of soldiers patrolling France’s streets was doubled on Thursday to meet this threat.