On Tuesday, the Labour MP for East Leeds, Richard Burgon, said there “is no military solution in Afghanistan”, adding that “the focus now should be on reparations and supporting refugees.”

“The crisis in Afghanistan is the result of 20 years of disastrous military intervention. Just as in Iraq & Libya, backing US-led invasions led to a huge loss of life,” the Secretary of the Socialist Campaign Group of Labour MPs continued.

The call for reparations from Burgon comes just days after the Socialist Workers Party front group Stop the War Coalition, which Burgon supports, called on the UK to offer a generous “refugee programme and reparations to rebuild Afghanistan”. 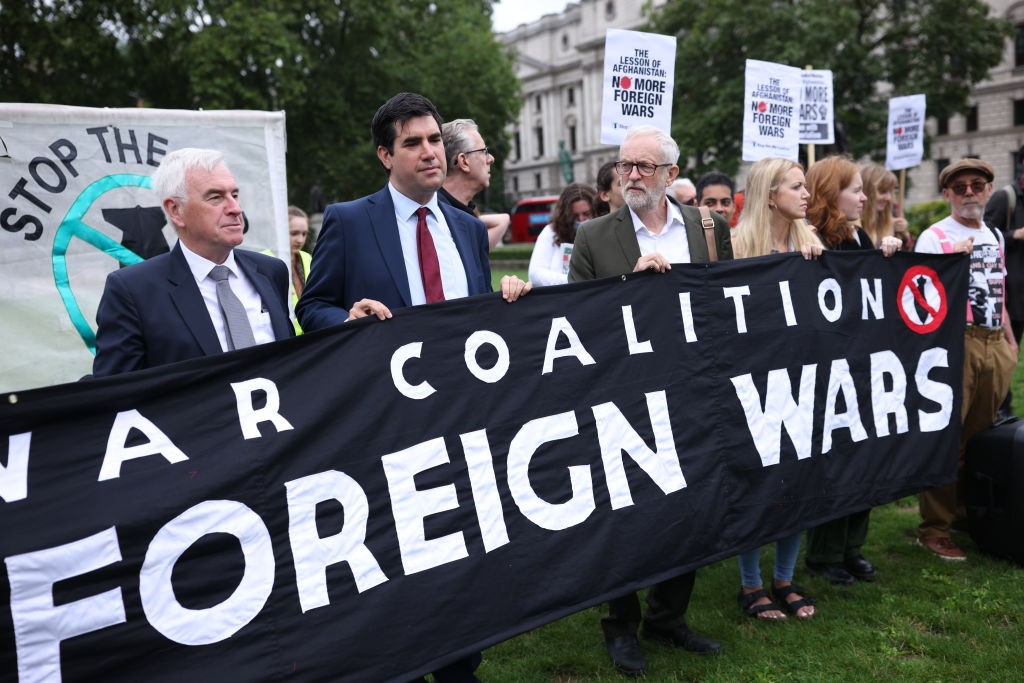 LONDON, ENGLAND – AUGUST 18: Labour MP Richard Burgon (second left) attends a protest against the future occupation of Afghanistan at Parliament Square on August 18, 2021 in London, England. The Stop The War Coalition held the protest in London today to call on the government to recognise the war in Afghanistan as a “catastrophe”. (Photo by Dan Kitwood/Getty Images)

The far-left group went on to say that reparations would “go a great deal further in advancing the rights of the Afghan people, women in particular, then continued military or economic intervention in the fate of the [sic] Afghanistan.”

Burgon, like the Stop the War Coalition, failed to elaborate as to whom reparations would be paid in Afghanistan, which is now largely controlled by the radical Islamist Taliban faction after the Afghan military buckled and the former president of the country fled abroad.

Burgon previously served in the Shadow Cabinet of former Labour leader Jeremy Corbyn, who also called this week for the British government to increase “humanitarian support” into Afghanistan.

During the two-decades-long war in Afghanistan, 457 British military members or Ministry of Defence civilians lost their lives in the conflict. To date, the government has spent an estimated £22 billion during the war.

The crisis in Afghanistan is the result of 20 years of disastrous military intervention.

Just as in Iraq & Libya, backing US-led invasions led to a huge loss of life.

There is no military solution in Afghanistan. The focus now should be on reparations and supporting refugees.

The current leader of the opposition Labour Party, Sir Keir Starmer, has not yet backed any calls for reparations. However, he has pressed on Prime Minister Boris Johnson to accept more refugees from the war-torn and terror-breeding ground nation.

Starmer said: “We have obligations to Afghanistan, we made promises to Afghanistan, and we cannot just walk away and let this turn into a humanitarian crisis, and probably a refugee crisis as well.

“Because there is a real risk now that international terrorism will take hold again in Afghanistan, so we can’t walk away.

“We can’t undermine the legacy of the last 20 years. There are families across the country who have lost loved ones. We should be proud of what they did but we can’t just turn our backs.”

On Tuesday, the Shadow Foreign Office Minister, Labour MP Stephen Kinnock, called on the government to take in “tens of thousands” of refugees from Afghanistan at taxpayer expense.

The government, for its part, has already signalled that asylum seekers from Afghanistan will have border restrictions, such as passport requirements, waived. This prompted concerns that terrorists, including the Taliban, could try to enter surreptitiously into the country.