A BBC reporter was arrested and beaten by China police on Sunday while covering mass protests in Shanghai against the country’s draconian zero-coronavirus policy.

The assault came days after World Economic Forum (WEF) founder and Chair Klaus Schwab gave an interview with a Chinese state media outlet and proclaimed China was a “role model” for other nations when it came to dealing with the virus.

“[…] The Chinese model is certainly a very attractive model for quite a number of countries,” Schwab told CGTN’s Tian Wei on the sidelines of last week’s APEC CEO Summit in Bangkok, Thailand.

The journalist who was attacked and detained was amongst thousands of people who flooded the streets of China’s major cities in a rare outpouring of public anger against the brutal governing Communist dictatorship.

The demonstrations are an unprecedented challenge to President Xi Jinping, with some calling on him to resign.

“The BBC is extremely concerned about the treatment of our journalist Ed Lawrence, who was arrested and handcuffed while covering the protests in Shanghai,” the broadcaster said in a statement.

The full statement can be seen below:

Speaking in Beijing, the Chinese foreign ministry spokesman, Zhao Lijian, said the BBC’s statement did not reflect what had happened, and that he did not identify himself as a reporter or show his press credentials, the Guardian reports.

“According to our understanding, the BBC’s statement is not true. According to authorities in Shanghai the journalist in question did not reveal his journalist identity at the time, he did not openly show his foreign press card,” Zhao said.

“When the incident happened, law enforcement personnel asked people to leave, and when certain people did not cooperate they were taken away from the scene.”

Lawrence, working in the country as an accredited journalist, was detained for several hours, during which time he was beaten and kicked by police, according to the BBC. He was later released.

Footage on social media showed him being dragged to the ground in cuffs, while in another video, he was seen saying: “Call the consulate now.”

“It is very worrying that one of our journalists was attacked in this way whilst carrying out his duties,” the statement said. 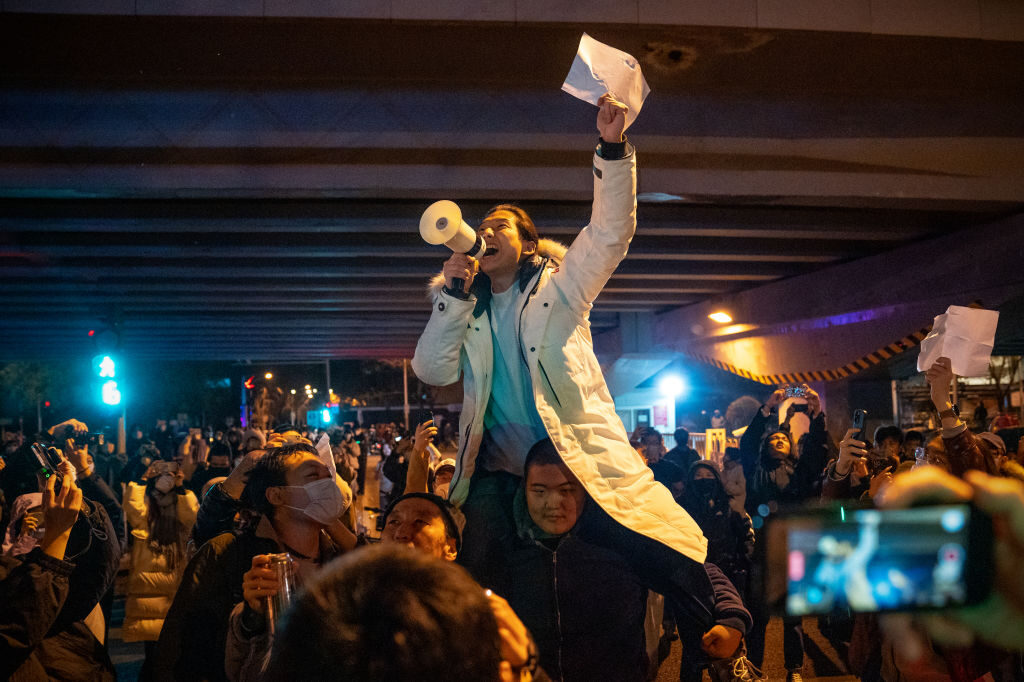 A demonstrator holds a blank sign and chants slogans during a protest in Beijing, China, on Monday, Nov. 28, 2022. Protests against Covid restrictions spread across China on Sunday as citizens took to the streets and university campuses, venting their anger and frustrations on local officials and the Communist Party. (Source: Bloomberg) 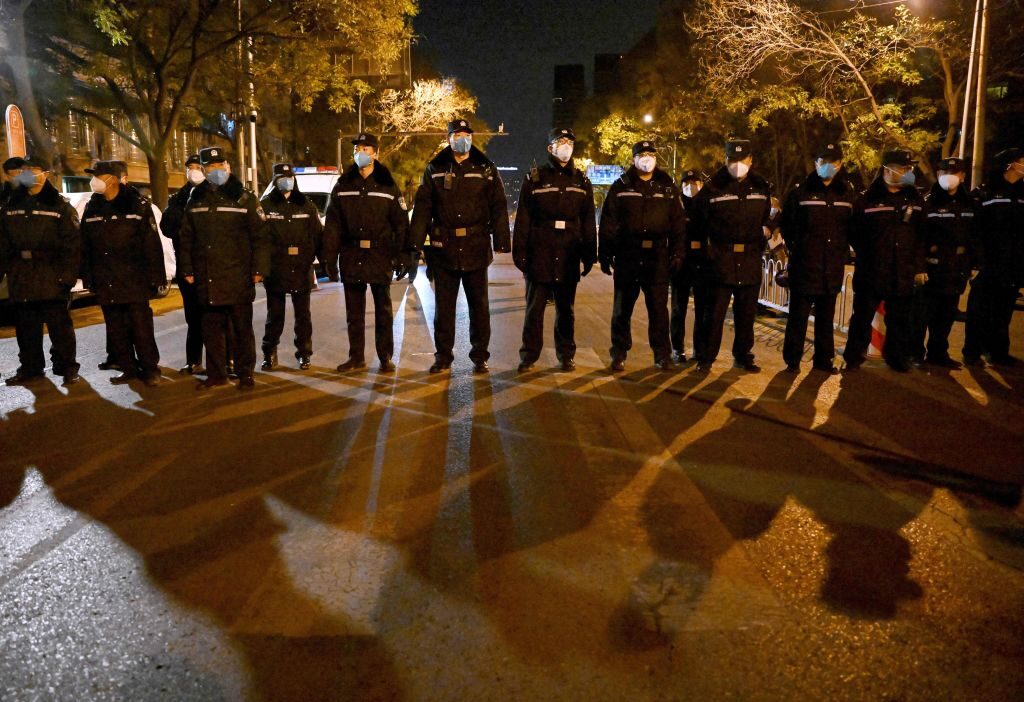 Policemen stand on guard during a rally against China’s draconian Covid-19 restrictions in Beijing on November 28, 2022. (NOEL CELIS/AFP via Getty)

“We have had no official explanation or apology from the Chinese authorities, beyond a claim by the officials who later released him that they had arrested him for his own good in case he caught Covid from the crowd,” the statement added.

“We do not consider this a credible explanation.”

Sunday’s national protests marked the third night of chaos which has spread to some of the country’s biggest cities, including Wuhan, the first epicentre of the coronavirus almost three years ago and the city that then spread it to the world.