“Lament, repent and apologize for biases or racist ideologies held and actions committed,” the Salvation Army stated in a lengthy 2021 report titled “Let’s Talk About Racism,” Dr. Donohue notes. Throughout the document, “the understanding is that white people are racists, thus necessitating the need to ‘apologize.’”

“As always, it is the elites who are the problem,” Donohue observes of the Salvation Army. “The average volunteer is just as good as ever, doing God’s work.”

In its report, the Salvation Army explicitly declares of America: “Our foundations were built on racism, and it is still strongly felt in every aspect of American life.”

“There is no other way to read that other than to say that “America is an inherently racist society,’” Donohue writes.

The Salvation Army’s “deep dive into critical race theory has created several blind spots,” he notes, including its “morally neutral interpretation of the Affordable Care Act.”

Chick-fil-A will reportedly stop donating money to charities including the Salvation Army and Fellowship of Christian Athletes following pressure from LGBT groups. https://t.co/gKGUzTyCPT

“One would think that a Christian organization would at least mention, if not condemn, the ObamaCare healthcare mandate forcing religious nonprofits, such as the Little Sisters of the Poor, to include abortion-inducing drugs in their healthcare plan,” Donohue adds.

In its definition of racism, moreover, the Salvation Army excludes the possibility that anyone but a white person can be a racist, calling it the “prejudiced treatment, stereotyping or discrimination of POC [People of Color] on the basis of race.”

“According to this definition, ‘People of Color’ are incapable of being racists,” Donohue observes. “That would mean that Louis Farrakhan, the notorious black anti-Semite, is not a racist.”

“No one believes this save those drunk on ideology,” he adds.

Doubling down, the Salvation Army report declares that a racist is “a person who belongs to a dominant or privileged group that discriminates against people of other races, or someone who believes that a particular race is superior to another.”

“It is ironic to note that this report, which was written to combat racism, smacks of racism,” Donohue writes. “The bias against white people is palpable.” 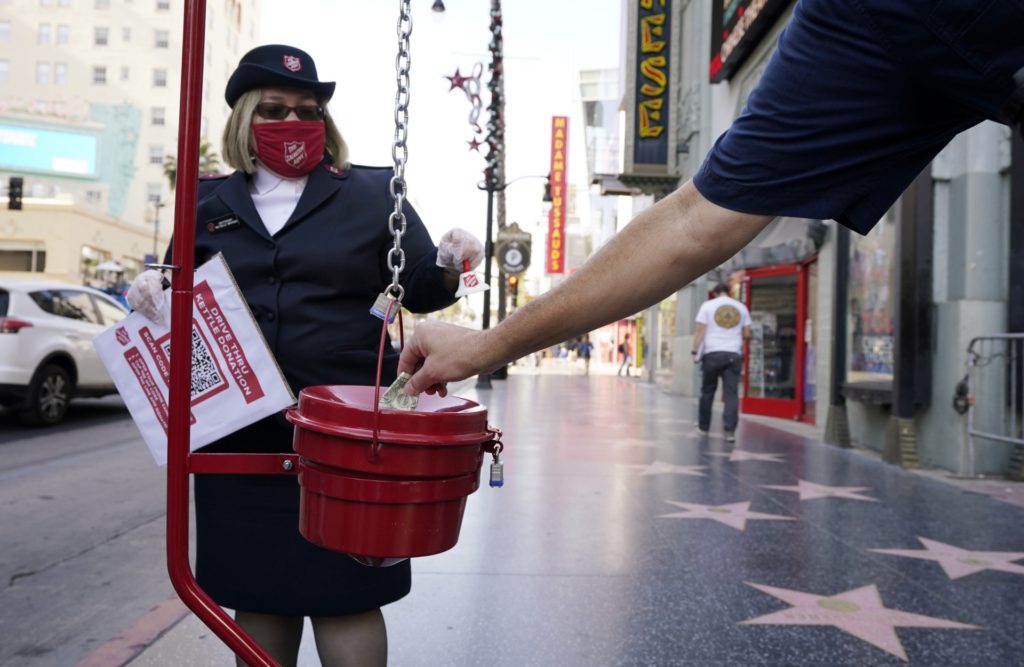 A pedestrian drops a dollar into a collection basket as Michelle Miranda of The Salvation Army looks on during the charitable organization’s drive-through donations event at the TCL Chinese Theatre, Thursday, Dec. 10, 2020, in Los Angeles.  (AP Photo/Chris Pizzello, File)

“Whiteness and White racialized identity refer to the way that White people, their customs, culture and beliefs operate as the standard by which all other groups are compared,” states the report’s glossary.

One of the biggest problems with this report “is the propensity to see racism everywhere,” he writes.

“The Salvation Army elites have done a disservice to this great organization,” Donohue concludes, and they should apologize and “pledge never again to succumb to left-wing politics.”