The Hispanic-dominated Los Angeles Unified School District Board has decided it is better to let failing students graduate with D grades rather than deny them a diploma because of their poor grades in college prep classes.

The board unanimously agreed on Tuesday that students with a D grade in so-called A-G courses, which are required for entry to the University of California and California State University systems, could graduate and earn their diploma. The Daily News reported that 51 percent of incoming seniors are behind on the courses.

Although she voted for the change, board member Tamar Galatzan was worried about the board’s action, asserting, “I am worried we are setting students up for failure because this district hasn’t gotten its act together,” according to SCPR.

LAUSD Superintendent Ramon Cortines had suggested that the district spend $15 million in the 2015-16 school year on a graduation initiative to help failing students. Some ideas included offering online classes to make up credits and expanding summer school.

The fact that 22,000 LAUSD students in the Class of 2017 would not gain their diploma because of the district’s policy of maintaining a C grade in the college prep classes may have influenced the board’s decision, as well as the fact the neighboring districts and charter schools had no such requirement.

The board decided to offer students who needed to stay in high school until age 22 more services.

LAUSD had stated in 2011, “Beginning with entering 9th grade students on July 1, 2012 and thereafter (graduating class of 2016 and beyond) students must be enrolled in the fifteen-course college preparatory A-G sequence and must complete these courses with a passing grade of ‘D’ or better for high school graduation, and ‘C’ or better to meet the minimum University of California (UC)/California State University (CSU) requirement.”

According to the California Department of Education’s Educational Demographics Unit, over 476,000 high school students are Hispanic or Latino, comprising 73.7 percent of the high schools’ student body. Dropout rates hover around 17 percent. 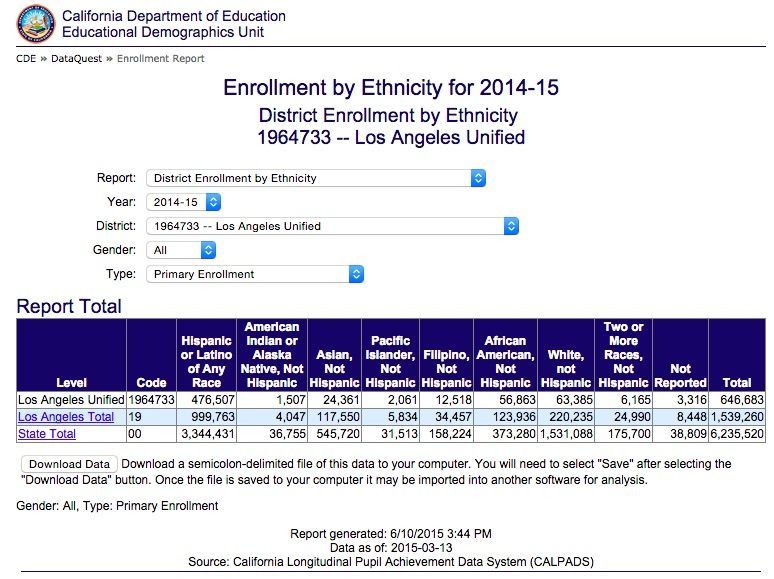 In 2014 during the first wave of illegal aliens from Central America, LAUSD Superintendent John Deasy told the Los Angeles Times, “”We welcome the new youth with open arms in LAUSD.” Students unable or unwilling to speak English increased from 142,457 to 146,794 after the border surge, according to the LA Times. That’s roughly 23 percent of all student enrolled.