The Islamic State organization recently published pictures of the “sentencing” of a man suspected of homosexuality.

The organization’s headquarters in Iraq’s Nineveh district said in a statement that it carried out the provisions of Shariah Islamic law against men who are guilty of “the transgression of homosexuality.”

In the pictures (see above and below), an IS gunman is seen reading out the “indictment” to a crowd of bystanders and IS activists, after which a “defendant” was thrown to his death from a nearby rooftop. 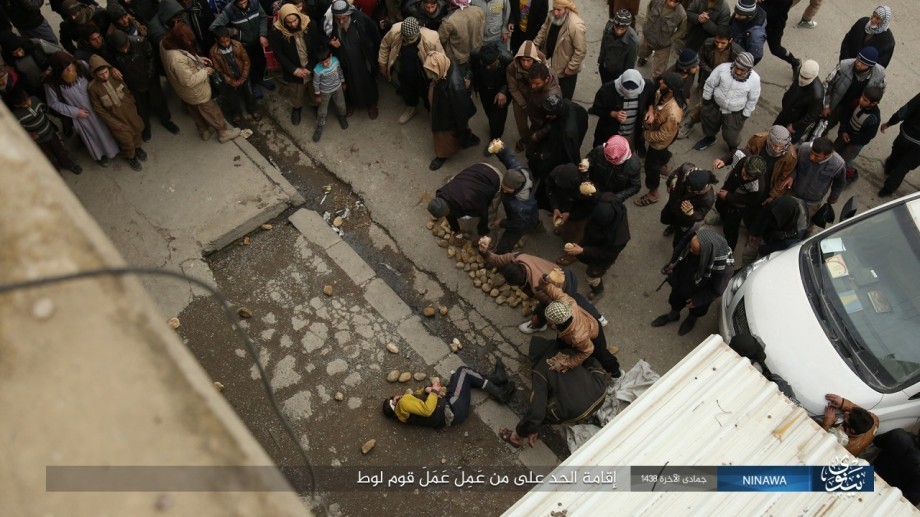 Nineveh is the district in which the battle of Mosul is taking place, pitting IS forces against the Iraqi army and troops of the US-led international coalition.

The man’s “crime” was likely committed in the city where IS is fighting to keep its foothold in the wake of six months of bloody fighting.

However, IS’ propaganda organ insists on showing that it is unfazed by the offensive, and remains committed to spreading Sharia and Islamic rule.

Simultaneously, IS disseminated pictures of the organization’s mosques and charity unit in action in the southern Syrian town of Sahmam Aliawlan, showing the activists handing out religious material, giving lessons in local mosques and renovating houses of worship.

From the city of Raqqa, where IS also struggles to fend off a US- and Russian-backed Kurdish offensive, the organization published pictures of day-to-day commercial activity. However, unlike similar campaigns in the past, the pictures did not include a plethora of patrons.