Khobar (Saudi Arabia) (AFP) — Dog owners in Saudi Arabia can now enjoy a cup of coffee alongside their beloved pets at a new cafe — a first for the ultra-conservative kingdom.

In Islam, dogs are considered unclean animals — unlike cats — and are generally banned from public places in Saudi Arabia.

But The Barking Lot, which opened its doors in June in the coastal city of Khobar, has delighted animal lovers in a country where there are few places to take pets outside the home.

The country’s once-notorious religious police used to ban the walking of pets, saying men were using it as a means to make passes at women.

But the ban was widely flouted and pets are becoming an increasingly common sight.

Animal shelters have sprung up in several cities.

The adoption of strays has become more popular in the rapidly modernising kingdom, which has undergone sweeping changes as part of Crown Prince Mohammed bin Salman’s “Vision 2030” plan. 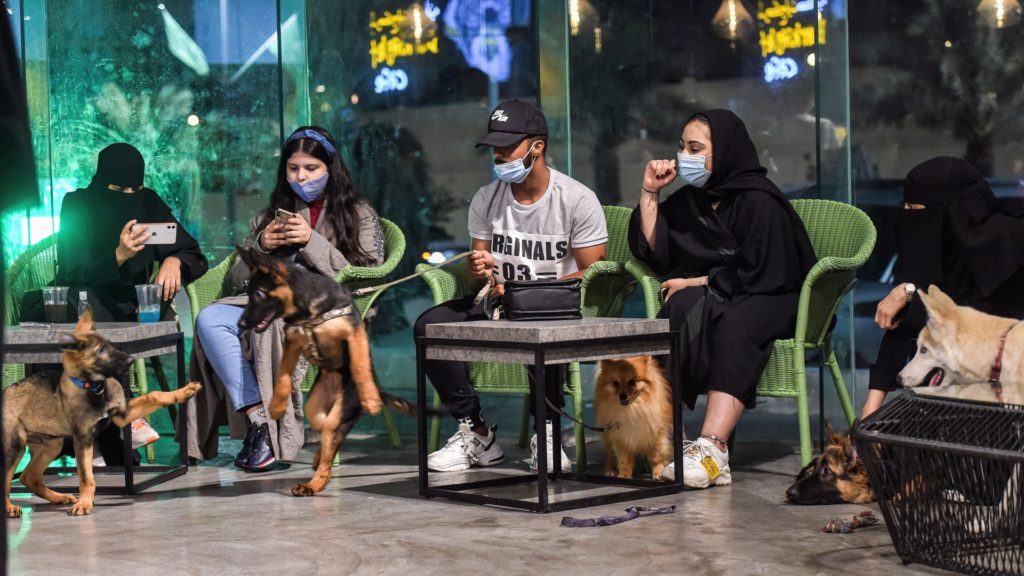 German Shepherds play together as their mask-clad owners  sit by at the “Barking Lot” cafe in Saudi Arabia’s eastern Gulf city of Khobar, 450 kilometres east of the capital, on September 25, 2020. Dog owners in Saudi Arabia can now enjoy a cup of coffee outside their home alongside their beloved pets in a new cafe — a first for the ultra-conservative kingdom. The Barking Lot, which opened its doors in June in the coastal city of Khobar, has brought them much relief amid restrictions on animals in public places. Dogs are generally prohibited from walking in public and, unlike cats, are considered unclean in Islam, which originated in Saudi Arabia. (FAYEZ NURELDINE/AFP via Getty)

The Barking Lot’s Kuwaiti owner, Dalal Ahmed, said she got the idea during a previous visit to the kingdom.

“I came to Saudi Arabia for a visit with my dog, but wasn’t allowed to walk on the beach with him,” she told AFP.

“I was very sad and decided to help by opening a coffee shop for people who have dogs — and even for those who do not.”

Young men and women gather at the cafe with dogs of all sizes.

Some pets playfully romp around, while others sit on their owners’ laps, or wait patiently at the counter as their guardians order drinks.

In one section, dogs are treated to washes and blow dries as part of the grooming services offered.

“The idea of this cafe is very new,” said Johara, a Saudi citizen. “It’s a distinct place where dogs can come and meet other dogs.”

For Nawaf, also from Saudi Arabia, it was the first time visiting the cafe, which he described as “beautiful”.

“I came here to play with the dogs, which now have a cafe for themselves for the first time in Saudi Arabia,” he said. 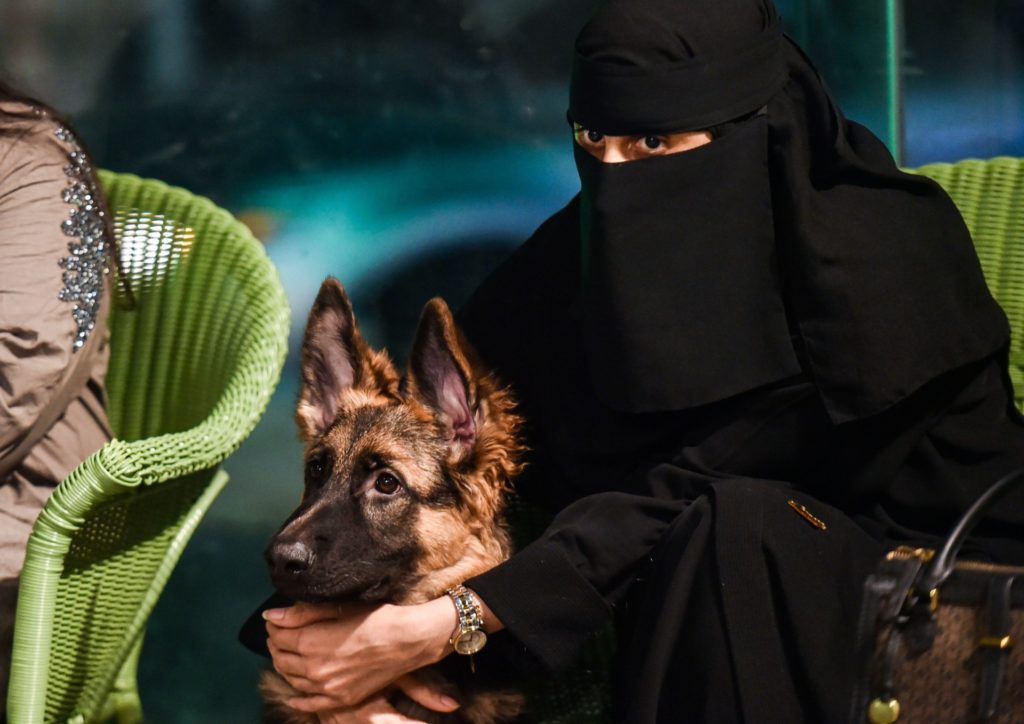 A woman sits with her German Shepherd at the “Barking Lot” cafe in Saudi Arabia’s eastern Gulf city of Khobar on September 25, 2020. ( FAYEZ NURELDINE/AFP via Getty Images)