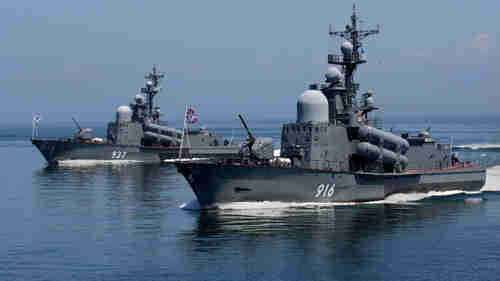 Various unconfirmed reports are emerging indicating that there may be joint international action planned in Libya as early as next week.

Egypt is already conducting air strikes against ISIS-linked targets in Derna, close to where Egyptian Coptics were massacred recently, as displayed in a gruesome video. Debka reports that Egypt’s president Abdel al-Fattah al-Sisi is planning further action in Libya, including more air strikes and possible ground troops, within a few days. According to the report, Egyptian commando and marine forces are preparing for sea landings to seize Derna and destroy the terrorist elements there. If this attack is actually launched, it will be the first time in modern times that an Arab country has sent ground forces into another Arab country.

Al-Jazeera television reports that the Italian navy is getting ready to carry off sophisticated military drills off the coast of Libya as early as Monday. Although Italy claims that it will be a regular exercise, there are many more vessels taking part in this year’s exercise than have in the past, which Italy explains by saying that they are testing out sophisticated new technologies.

There are several reasons why Italy is pursuing this show of force:

Some reports indicate that Russia has hinted at a willingness to participate in a naval blockade of Libya to prevent arm supplies from leaving Libya for other countries. Russia could play a role in this because it already has a naval fleet in the Mediterranean.

Egypt court declares Hamas to be a terrorist organization

Egypt on Saturday became the first Arab country to name Hamas as a terrorist organization. The U.S. and the European Union have named Hamas as a terror group. An EU court took Hamas off the list in December 2014, ruling that the designation was not based on solid legal evidence, but the EU is appealing the court’s decision.

According to a decision on Saturday from the Cairo Court for Urgent Matters:

It has been proven without any doubt that the movement has committed acts of sabotage, assassinations and the killing of innocent civilians and members of the armed forces and police in Egypt.

It has been also ascertained with documents that [Hamas] has carried out bombings that have taken lives and destroyed institutions and targeted civilians and the armed forces personnel. It has also been ascertained that this movement works for the interests of the terrorist Brotherhood organization [which Egypt has already declared to be a terrorist organization].

A Hamas spokesman denied all the charges and said that the ruling was “dangerous”:

History has recorded Egypt’s support to national liberty movements in the Arab world and Africa, particularly in Palestine. … This ruling serves the Israeli occupation. It’s a politicized decision that constitutes the beginning of Egypt evading its role toward the Palestinian cause. This is a coup against history and an Egyptian abuse of the Palestinian cause and resistance, which fights on behalf of the Arab nation. We call on Egypt to reconsider this dangerous decision.

By coincidence or by planning, the presidents of both Egypt and Turkey will be in Riyadh, Saudi Arabia, this week. Egypt’s Abdel al-Fattah al-Sisi and Turkey’s Recep Tayyip Erdogan will both be visiting King Salman bin Abdulaziz al Saud, the new king of Saudi Arabia, who has replaced King Abdullah, who died last month.

It is not known whether Erdogan will ever be in the same room as al-Sisi. The two have been bitter enemies ever since a coup by al-Sisi ousted Egypt’s elected president Mohamed Morsi and his Muslim Brotherhood government in 2013, and later declared MB to be a terrorist organization. Erdogan’s own political party, the AKP, is an Islamist party like the Muslim Brotherhood, and they had good relations while Morsi was in power.

There has been some speculation that King Salman is going to completely reverse King Abdullah’s policy on the Muslim Brotherhood. Saudi Arabia and United Arab Emirates (UAE) had branded MB as a terrorist organization, but some are wondering if Salman is going to shift from that policy. The Saudi foreign minister recently said that his government has “no problem with the Muslim Brotherhood; our problem is with a small group affiliated to the organization,” suggesting that shift is in the works.

Other problems make an Egypt-Turkey rapprochement unlikely: Erdogan vitriolicly hates Israel and supports Hamas. Al-Sisi vitriolicly hates Hamas and works closely with Israel on military matters, especially in North Sinai. It does n0t seem likely that any meeting, if one even occurs, will be pleasant.

If King Salman is able to pull off a miracle and mediate a new relationship between Egypt and Turkey, then it would appear to be the establishment of a new “Sunni front” in the Mideast, to oppose Iran, Hezbollah and the regime of Bashar al-Assad in Syria. Al Arabiya and Kurdistan and Arab Times