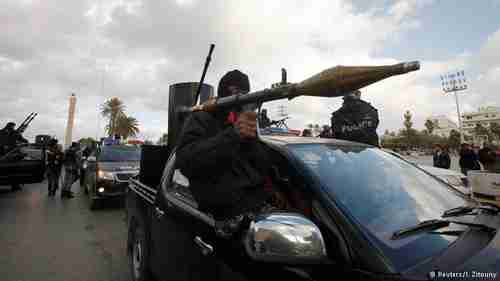 Even a couple of weeks ago, it was unthinkable that Libya’s rival governments would be willing to sit down and talk to one another.

Libya’s elected parliament is in charge of the government that is internationally recognized, and headquartered in Tobruk, in eastern Libya. The rival government is the General National Congress (GNC), headed by the Islamist-backed Libya Dawn faction, headquartered in Libya’s capital city, Tripoli, in western Libya. Previous attempts by the United Nations to broker an agreement for a unity government have broken down because neither side wanted to talk to the other.

But in the last few weeks, the Islamic State (IS or ISIS or ISIL or Daesh) has taken control of Sirte, where there are now tanks in the streets and black ISIS flags are waving in the city center. There are fears that ISIS will take control of some oil facilities and export the oil to make money. Furthermore, the recent publicity stunt where 21 Egyptian Coptic Christians were beheaded, with the results shown in a gruesome posted video, have changed the mood of the leaders of the two governments.

Although an agreement on a unity government is considered unlikely, on Saturday representatives of the two governments were at least willing to sit down and talk to one another. The UN-sponsored meetings are taking place in Rabat, the capital city of Morocco. After Saturday’s meeting, both groups will return to Libya for consultations, and then return to Rabat on Wednesday to sign a deal, if any.

If an agreement on a unity government is reached, then the European Union has said it is prepared to provide some military help in fighting ISIS. On Saturday, UN envoy Bernardino Leon called on the European Union to mount a naval blockade of Libya that would prevent the flow of weapons to ISIS and the illegal flow of oil from Libya. However, the EU has resisted calls in the past for another kind of blockade of Libya, to stem the flow of thousands of migrants from Libya to Italy. Al Arabiya and Deutsche Welle and AP

UAE may replace Saudis as Egypt’s most important Arab ally

In recent years, under King Abdullah, Saudi Arabia has been Egypt’s greatest Arab supporter and benefactor. But Abdullah died in January, and his successor King Salman bin Abdulaziz al Saud has been tilting away from Egypt towards Turkey, as we have been reporting in the last few days.

The issue that has inflamed differences among the Arab states, especially since last summer’s war between Gaza and Hamas, is the status of the Muslim Brotherhood and its offshoot Hamas. Last year, Saudi Arabia and United Arab Emirates (UAE) and Egypt considered the Muslim Brotherhood to be a terrorist organization, while Qatar and Turkey supported the Brotherhood. But King Salman has been openly getting close to Turkey, potentially leaving Egypt out in the cold. Turkey and Egypt have extremely hard and opposing positions on the Muslim Brotherhood, and no one considers a rapprochement likely.

Egypt is the largest benefactor of UAE’s aid, especially since the July 2013 coup that ousted Egypt’s democratically elected president Mohamed Morsi and his Muslim Brotherhood government. In addition to providing direct cash aid, the OPEC member has been building schools, clinics, wheat silos and tens of thousands of homes, possibly creating a million jobs in Egypt.

The relationship between UAE and Egypt may be deeper than just supplying aid. According to leaked audio tapes obtained by Turkish officials and released to the press, UAE was heavily involved in bringing about the coup that ousted Morsi. The ouster was triggered by huge anti-Morsi protests, and the leaked tapes indicate that the protests were fomenting using funds provided by the UAE. A leaked audio tape leaked last month contains a tirade by Egyptian official Abbas Kamel describing the Gulf countries as ‘half states’ and launching into a tirade of insults against the Qatari royal family. AP and Telegraph (London) and Daily Sabah (Turkey) (2-Feb)

58 people were killed and hundreds injured on Saturday in five coordinated suicide bombings in various parts of Maiduguri, the largest city in northwest Nigeria, and the city that Boko Haram has named as the intended capital city of its Islamic state.

The first bombing occurred when a female suicide bomber blew up her vest in a crowded fish market at 11:20 am. An hour later, there was another bombing at another crowded market. Shortly after 1:00 pm, a third bombing occured at a busy bus terminal. The Nation Online (Nigeria)

Also on Saturday, Boko Haram issued an audio statement declaring its allegiance to the Islamic State. “We announce our allegiance to the Caliph… and will hear and obey in times of difficulty and prosperity, in hardship and ease,” said the statement. Officials are concerned that as ISIS builds its international infrastructure, and gather resources and military capabilities, Boko Haram and other linked terrorist groups will be able to expand operations and control more quickly. Reuters