As the Eurotunnel was again closed today by a migrant fatality, a spokesman told Breitbart London that European governments must now work to stop migrants at “their country of origin”.

The undersea Eurotunnel railway that links Great Britain to the European mainland has been closed and significantly delayed on several occasions in recent weeks, as large gangs of up to 150 migrants have stormed the tunnels hoping to jump on freight trains going under the English Channel to the United Kingdom. When Breitbart London asked a Eurotunnel spokesman what plans the company had to preserve its business from migrant invasions of secure areas, which may yet undermine the tunnel’s reputation as a quick and efficient way to get from Britain to Europe, the response was refreshingly honest. 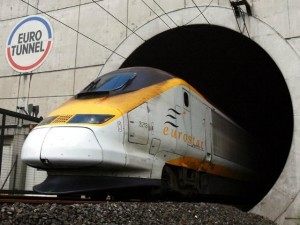 Explaining that the Eurotunnel group invested millions of euros every year into improving security, the spokesman said:

“The problem of migrants around Calais is increasing dramatically. It went from some 600 migrants at the start of the year to some 3,000 plus presently. Their sole intention is to get to the United Kingdom by any means possible, and this is leading them to make some very dangerous decisions. This has led unfortunately recently to two deaths, the latest being this morning.

“Eurotunnel has spent €150 million in security in the past 15 years. All of it is targeted at making it harder for migrants to access our sites, and to make our sites safer for our customers. We have put up fences, adding extra lighting at night, cameras, infra-red detectors, extra staff. We have got more sniffer dogs, more controls on lorries entering the system, we have invested a huge amount of money in security”.

Despite the investment, the spokesman said the illegal migrants trying to gain unauthorised access to the Eurotunnel secure areas continued to come, and find ways around the obstacles thrown in their way. He said the fact the migrants were in Calais at all was down to government policy – and it was up to government to stop them coming. He said:

Britain’s M20 motorway was again transformed into a stationary car-park this morning as thousands of vehicles queued to enter the Channel Tunnel boarding facility at Dover. Police engaged ‘operation stack’ – effectively closing the motorway and turning it into a lorry-park twice this weekend, reacting to incidents around the tunnel which forced closure.