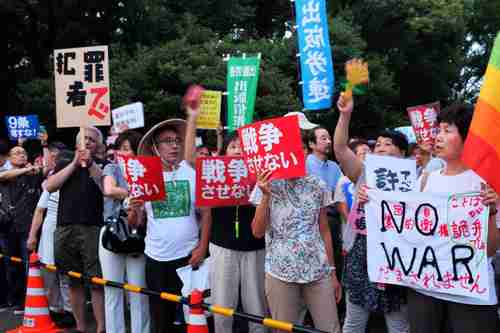 As we reported two days ago, Japan’s prime minister Shinzo Abe is pushing through the parliament a law that would reinterpret the clause in Japan’s “pacifist” constitution that the military could be used only in Japan’s self-defense to include “collective self-defense,” which would allow Japan to use the military in defense of an ally anywhere in the world. For example, if an American warship were attacked by China near Japanese waters, then Japan would be prohibited from defending it, unless collective self-defense were allowed.

The reinterpretation is unpopular in Japan according to polls, and there have been large public demonstrations opposing it. Those who oppose it say that the self-defense clause was part of a constitution that a was wonderful gift given by the United States to Japan at the end of World War II, and that it should not be changed. However, Abe has expressed the view that the constitution is a humiliation imposed on Japan by its American conquerors.

The reinterpretation is being triggered by the rise and increasing belligerence of China’s military. The United States has pressured Abe to make the reinterpretation, saying that it is important for the security of Japan itself.

Not surprisingly, Chinese officials are outraged. China was invaded by Japan prior to World War II, and China uses that invasion to justify its own massive military buildup, while at the same time using it to condemn any military actions by Japan. China is blasting the reinterpretation as a “nightmare scenario,” and the Foreign Ministry issued a statement saying:

[The reinterpretation is] an unprecedented move since the Second World War … [which] may lead to significant changes in Japan’s military and security policies. It is fully justified to ask if Japan is going to give up its exclusively defense-oriented policy or change the path of peaceful development that has been long pursued after the Second World War.

The Chinese News Service was considerably more dramatic and blunt:

By fatally slashing Japan’s seven decades of pacifism, like a Shogun’s shoulder to waist “kesagiri” finishing move, in the very year marking the 70th anniversary of the end of World War II, Prime Minister Shinzo Abe on Thursday realized his dream of abandoning postwar order and switching his country back into war mode.

Despite majority of population’s opposition, the country’s ruling coalition led by the historical revisionist rammed through a series of controversial security bills in Japan’s all-powerful lower house Thursday, marking a backward move meaning the historically bloodied “samurai sword of Japan” could once again be wielded by its troops in every corner of the world.

This sounds like something that Sun Tzu, the author of the ancient Chinese classic The Art of War, might approve of. The Diplomat and Chinese News Service and Akban School of Martial Arts

On Friday, Germany’s parliament overwhelmingly approved the 7 billion euro bridge loan so that Greece won’t go bankrupt in the next two or three weeks.

Germany’s finance minister Wolfgang Schäuble is being widely identified as the bad guy in the negotiations, the hardliner who’s making everyone suffer, particularly the Greeks. According to a dramatic but scathing article in the left wing periodical Der Spiegel:

He then inhaled, flashing a pugnacious smile and turned his wheelchair around. He then prepared for battle of a kind he had never before fought in his long political career — a battle against the Greek government, against American economists, against large swathes of European public opinion and also, to some extent, against the chancellor herself.

Had it been up to Schäuble, Germany would have shown the Greeks the euro-zone door long ago. His problem, however, is that the chancellor doesn’t share this sentiment. Merkel rejects his insistence because she doesn’t want to go down in history as the government leader responsible for the disintegration of Europe.

If it were any other minister that had so persistently refused to endorse her line, she would likely have got rid of him long ago. But she can’t do that with Schäuble. His hard line is precisely what makes him so popular among the Germans.

So apparently it is not just Schäuble who’s the bad guy. It is all those Germans who like Schäuble’s hard line.

This crisis has been going on for five years. There have been two previous bailouts, in 2010 and 2012, totaling 240 billion euros. Now negotiations are supposed to begin on a third bailout, for 80 billion euros. The bailout money has been supplied by three institutions — — the European Commission (EC), European Central Bank (ECB) and International Monetary Fund (IMF), formerly known as the “Troika.”

To add to the fun, there’s even another deadline set: European officials are saying that a new Memorandum of Understanding (MoU) must be signed by August 10 between Greece and the Troika.

So, here we go! Prepare yourself for another few weeks of daily crises. Der Spiegel and AFP and Irish Times