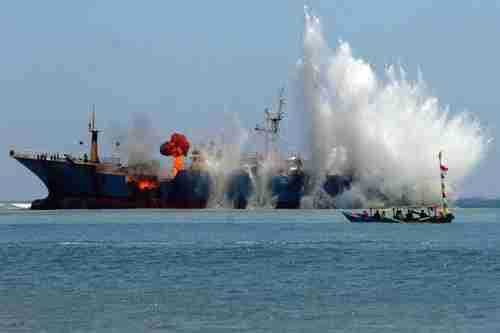 On Saturday, a large Chinese coast guard warship in Indonesian waters rammed a vessel that was being towed by an Indonesian patrol vessel. The vessel being towed was a Chinese fishing boat that had been illegally fishing in Indonesian waters around the Natuna Islands in the South China Sea. Another large Chinese warship arrived on the scene and forced the Indonesians to release the fishing vessel. However, the eight-member crew of the Chinese vessel had already been arrested, and are still in custody.

The Natuna Islands have always been sovereign Indonesian territory. They are far away from China, but because of the rich fishing grounds, China would like to use its military power to seize the islands from Indonesia. ( “21-Oct-14 World View — Tensions grow with China over Indonesia’s Natuna Islands”)

According to Indonesia’s Maritime Affairs and Fisheries Minister Susi Pudjiastuti:

The Chinese government does not want to see its ships being sunk. Although the ship has gone, we did manage to arrest its crew for prosecution. It [China] should have not have behaved in such a way because a national government should not step in to support illegal, unreported or unregulated fishing.

The government says that it will formally protest China’s “arrogant” actions.

China is claiming the entire South China Sea, and is using its massive military force to confiscate regions that have historically belonged to other nations, especially Vietnam and the Philippines. China is building artificial islands and converting them to military bases with advanced missile and radar systems. ( “23-Feb-16 World View — China’s military buildup neutralizes America’s aircraft carriers”)

On March 19, after the relevant trawler was attacked and harassed by an armed Indonesian ship, a Chinese coast guard ship went to assist.

The Chinese side immediately demanded the Indonesian side at once release the detained Chinese fishermen and ensure their personal safety.

Indonesia’s foreign policy has been devoted “maintaining peace” in the South China Sea by serving as an “honest broker” between China and other disputants. That is why the threat of making a formal protest, if carried out, would be out of character for Indonesia, since the Indonesians are afraid of souring relations with China. However, the prosecution of the fishermen would certainly turn into a major incident.

This ramming incident has clearly shocked the Indonesians. After meeting with Chinese embassy officials, Pudjiastuti was clearly angry:

We feel interrupted and sabotaged in our efforts. We may take it to the international tribunal of the law of the sea.

In recent years, several south Asian countries, including Indonesia, Burma (Myanmar), Thailand, Cambodia and Malaysia, have all been growing their naval capabilities in the region, in response to China’s military bellicosity in the South China Sea. At the very least, this new incident is likely to trigger an additional naval buildup by Indonesia. Jakarta Post and Reuters and Diplomat

US and Philippines agree on access to five military bases

The U.S. had military bases in the Philippines for 94 years, since the early 1900s, following the Spanish-American war, and the bases played a crucial role for America in World War II and the Vietnam war. Subic Bay and Clark became America’s largest military bases outside the U.S., but due to a substantial growth of anti-Americanism, The Americans were thrown out in 1991.

The new agreement, which will be valid for ten years, does not allow for permanent US bases as occurred in the past. It allows the U.S. increased military presence in the Philippines rotation of ships and aircraft for humanitarian and maritime security operations, the latter referring to countering China. In addition, the US will provide $50 million in aid, mostly to help the Philippines improve radar and other South China Sea monitoring capabilities.

The five bases are: Antonio Bautista Air Base, Basa Air Base, Fort Magsaysay, Lumbia Air Base and Mactan-Benito Ebuen Air Base.