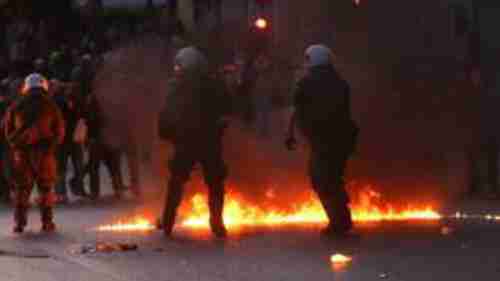 Protesters in Greece have hurled petrol bombs at police who responded with tear gas outside the parliament in Athens. (EPA)

Greece’s parliament on Sunday voted on a new set of harsh austerity measures that lending institutions are demanding of Greece in order to receive new bailout loans and stave off bankruptcy.

Almost 15,000 people turned out in Athens and Thessaloniki to protest the planned austerity measures. The demonstrations were mostly peaceful, but a small group of anarchist protesters hurled firebombs, Molotov cocktails and other projectiles at police in Syntagma Square in front of Parliament. Police responded with bursts of tear gas to repel the anarchists.

By Sunday, Greece was in the grip of labor strikes that have paralyzed public transport across the country, and shut down other public sector services.

The move to impose the harsh austerity measures is being led by Greece’s far-left prime minister Alexis Tsipras, who performed a mind-bending U-turn last year. Tsipras was elected early last year by promising that there would be no more austerity measures. After being elected, he repeatedly lied and promised reforms with no intention of implementing them. After months of one crisis after another, Tsipras final had to agree to implement the harsh austerity measures demanded by Greece’s lenders, because European officials were “holding a knife at my neck.” Kathimerini and AFP

After six years of real austerity, Greeks are at wits’ end

Greece has almost been forgotten, after living with six years of austerity, with 25% unemployment, and having to deal with more than a million refugees reaching the country, receiving little sympathy and no help to speak of. That crisis is far from over, with 50,000 migrants still in Greece, many awaiting the outcome of asylum applications.

A typical story is that of Dimitris, a retired 75-year-old construction worker who has to live on a measly 406 euros ($463) per month, and now even that will be cut. He says,

I had to help on the farm when I was 5, later I became a truck driver, then a construction worker, and in my later years I was a subcontractor in the building industry. I slaved away my whole life until I had my heart attack. And it was all for nothing!

If his pension is cut further, Dimitris would be forced to ask for money from his children – who themselves are barely getting by.

But in fact, the austerity measures being voted are reductions in pensions and sharp increases in taxes on gasoline, tobacco, cable television and gambling on Sunday. There may also be an internet tax and a special levy on bank transactions, and value-added tax is to be raised to 24%, too. Deutsche Welle and Kathimerini and Scotsman

Bolivia accuses Chile of setting up military base near border

Bolivia’s President Evo Morales accused Chile on Sunday of threatening the Bolivia by establishing a military base 15 km (9 miles) from their shared border. He added that international norms prohibited installing military bases less than 50 kilometers (30 miles) from international borders in order to avoid confrontations.

Chile denied the accusation, and said that no such military base exists.

Bolivia and Chile are still in disagreement over the outcome of the War of the Pacific, 1879-83, involving Bolivia, Chile and Peru. As a result of that war, Chile acquired two provinces that had formerly belonged to Bolivia and Peru, respectively. the land acquired from Bolivia was about 120,000 sq km in size, roughly the size of Greece. In addition, Bolivia lost its coastline, and has been landlocked every since. Furthermore, the acquired provinces have turned out to have large copper deposits that have made Chile the world’s largest copper producer.

In 2013, Bolivia took Chile to the International Court of Justice in The Hague in the dispute that has been extremely bitter for over a century. Reuters and BBC (24-April-2013) and Library of Congress