Syria’s al-Assad goes for the kill, turning Aleppo and civilians to bloody rubble 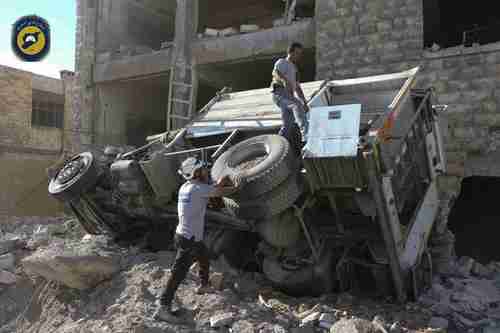 Aftermath of bombing in Aleppo on Friday (AP)

US Secretary of State John Kerry has once again been the major instigator and Russia’s useful idiot for what has turned out to be a new foreign policy farce for the Obama administration. As I wrote when the ceasefire agreement was first announced, just a few days ago, ceasefire agreements in the middle of a war are almost always worthless, and this one was particularly farcical because Syria’s president Bashar al-Assad has repeatedly made clear that’s he’s going to massacre all the “terrorists,” by which he means all Sunni Muslim civilians, including women and children. A real ceasefire would give new life to the residents of Aleppo, and al-Assad wants them dead, not alive. So there was literally a zero probability that the ceasefire would last.

The particular event that signaled the failure of this ceasefire was the missile attack, by either Syrian or Russian warplanes, on a truck convoy that was delivering food, water, medicines, and other humanitarian aid to east Aleppo.

Right off, we can see what a farce this is. Al-Assad doesn’t want a humanitarian aid cargo to reach east Aleppo. There are hundreds of thousands of civilians there, and al-Assad wants them all dead. So of course he was going to make sure that the aid convoy didn’t reach them. This is not rocket science. The warplanes destroyed 18 of 31 trucks in the convoy.

Immediately we had to listen to the moronic statements of Bashar al-Assad and Russia’s foreign minister Sergei Lavrov, claiming that nothing had happened, or that the “terrorists” had bombed the trucks, or that an American drone had struck the convoy with missiles.

At an emergency meeting of the UN Security Council, Secretary of State John Kerry mocked and made fun of Syrian and Russian excuses:

According to spokesman Igor Konashenkov, I quote, “Neither Russia nor Syria conducted air strikes on the UN humanitarian convey in the suburb on the outskirts of Aleppo.” That’s a quote.

Then Komashenkov went further, and he said “The damage to the convoy was a direct result of the cargo catching fire.” The trucks and foods and the medicine just spontaneously combusted. Anybody here believe that? I mean this is not a joke. We’re in serious business here.

Kerry waved his arms in the air to emphasize the idiocy of the suggestion that 18 of 31 trucks were destroyed by spontaneous combustion. But this is the level of discourse that’s filling the halls of the United Nations, rapidly turning into the most useless organization in the world.

The most likely explanation is that Kerry still hopes that the loons in Sweden will give him the Nobel Peace Prize when they announce it October 7. They gave it to Obama in 2009 “for his extraordinary efforts to strengthen international diplomacy and cooperation between peoples.”

So why not? If Kerry stumbles and lurches from one failed policy to the next, all in the name of “peace,” then why shouldn’t the Swedish loon give it to Kerry for exactly the same reason: “for his extraordinary efforts to strengthen international diplomacy and cooperation between peoples” — even though all such efforts have been absurd failures.

On Friday, Syrian and Russian warplanes appeared to be closing in for the killed. Hundreds of missiles and barrel bombs rained down on eastern Aleppo, turning many neighborhoods to rubble mixed with blood and body parts. Washington Post and CNN

“The Syrian government is working with the terrorist group Hezbollah, a sworn enemy of Israel.”

This is a very good point that isn’t mentioned enough. Hezbollah, Bashar al-Assad, and Iran’s supreme leader Ayatollah Seyed Ali Khamenei are all committed to the destruction of Israel.

“Give it up Breitbart, We the people don’t want a war with Syria. Let Saudi Arabia and Israel fight they’re own wars for the pipeline. The lives of are sons and daughters should not be sacrificed for globalist!”

One of the bitter ironies of the way the world works is that war is rarely a choice. The United States has mutual defense treaties with many countries: Japan, South Korea, Israel, Taiwan, the Philippines, the Marshall Islands, the ANZUS agreement with Australia and New Zealand, a special treaty with Iceland, and the NATO agreement with all of Europe.

Even more important, there are a lot of people, in America and in the world, who believe in American Exceptionalism, and who truly believe that America has a moral obligation, or even an obligation dictated by God, to do the right thing, so we won’t stay out of a war very long.

“Of all the players in the Syrian conflict, Erdogan is the most culpable. Assad being an Alawite, and therefore an infidel in Sunni eyes, the Gulf Arabs put up the funding and Erdogan the logistical support for an armed uprising against him. Turkey provided free passage for ISIS volunteers, training, and medical support. Turkey bought ISIS oil and passed on Gulf money. But Erdogan has a problem. He hates the Kurds even more than he hates Assad. And Russia supports Assad. So he is putting off the removal of Assad for now, the better to deal with his own Kurds, and those in Syria and Iraq.”

This simply doesn’t make any sense.

Recall that early in 2011, Turkey and Syria were allies. The historic enmity between Alawites and Sunnis was put aside, and Turkey’s prime minister Recep Tayyip Erdogan considered Bashar al-Assad to be a friend. Hamas had its headquarters office in Damascus, with the support and protection of al-Assad. Turkey, Saudi Arabia, Syria, Iran, Hamas, Hezbollah were all uneasy allies, but allies nonetheless, with only one common enemy: Israel.

Then al-Assad started exterminating peaceful anti-government protesters. Imagine if President Obama sent out warplanes to kill peaceful protesters on the Washington Mall, then you can understand the shock throughout the region to al-Assad’s depraved violence.

The real turning point came in August, when al-Assad started a massive military assault on a large, peaceful Palestinian refugee camp in Latakia, filled with tens of thousands of women and children Palestinians. The US State Department called the attacks “abhorrent and repulsive.”

Turkey’s Foreign Minister Ahmet Davutoglu issued a stark warning to Syrian authorities to immediately halt military operations across the country, or Turkey would “take steps,” although those steps were not specified:

“If these operations do not stop there will be nothing left to say about the steps that would be taken. This is our final word to the Syrian authorities, our first expectation is that these operations stop immediately and unconditionally.

In the context of human rights this cannot be seen as a domestic issue.”

Turkey never took direct military action against Syria (until 2016 with Operation Euphrates Shield), but the attack on the refugee camp completely changed Mideast politics. Turkey began turning against al-Assad, reviving the old Alawite-Sunni fault line. Hamas withdrew its headquarters from Damascus and moved it to Qatar. The Saudis and Turks began supporting “moderate” Syrian opposition rebels, some of whom aligned themselves with al-Qaeda as the al-Nusra Front. Tens of thousands of jihadists from dozens of countries around the world started pouring into Syria to fight al-Assad, later forming themselves into the so-called Islamic State (IS or ISIS or ISIL or Daesh).

It’s now five years later, and it’s almost beyond belief how Bashar al-Assad, with the support of Russia, Hezbollah and Iran, has caused the greatest geopolitical disaster of the 21st century so far. Syria itself is turning into rubble, but al-Assad’s disaster goes well beyond Syria’s borders. Sectarian tensions are at a fever pitch, with Iran and Saudi Arabia close to war. Al-Assad has created millions of refugees, flooding into neighboring countries and Europe.

So Erdogan did not foment an armed uprising against al-Assad. Al-Assad did that all by himself by his extermination of peaceful protesters, with a major turning point at his massive military attack on the Palestinian refugee camp in Latakia.