In a speech to highway, rail and traffic police, Pope Francis enumerated a list of new traffic sins, while praising the work of those dedicated to keeping the roads safe.

After being credited with issuing 10 commandments on climate change, 15 commandments for Vatican staff, and 10 commandments for a happy life, Pope Francis has finally tackled the sins of the road, by denouncing the misuse of cell phones while driving, turning streets into “Formula One” racetracks, seeing other drivers as “obstacles or adversaries to defeat” and road rage.

“Every citizen should feel grateful for the work you do in the name of the state and of the community,” Francis told police in a meeting Monday in the Vatican, by aiming to ensure “the safety of those who travel on the roads and by rail.”

With increased travel in the contemporary world, “efficient and safe mobility has become a primary and indispensable requirement for a society that wants to keep pace with development and ensure the well-being of its members,” he said.

Police, the Pope said, have to deal with the “complex and tumultuous reality of the streets,” which means, among other things, “the task of detecting violations, regulating traffic, and preventing and reporting accidents, as well as assisting those involved.”

Some drivers “line up at traffic lights as if it were the Gran Prix,” Francis lamented, adding that many drivers fail to realize “the serious consequences of their carelessness (for example by misusing their cell phones) or their lawlessness.”

The pontiff credited many such traffic violations to an overly “hurried” and “competitive” lifestyle assumed by many in modern society.

Last week, the Lamborghini auto company gave Pope Francis the gift of a special papal edition Huracan, though Vatican officials said that the Pope would not be driving around in the sports car, but would be auctioning it off for charity. 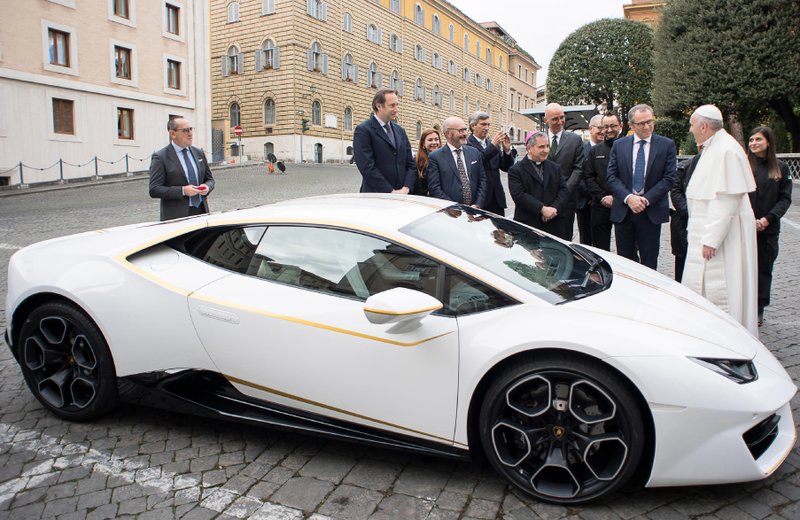 In their battle against evil, the Pope concluded, law enforcement agents work effectively for the common good of society.

Far from being a merely bureaucratic matter, “it is important to recognize the reality of this conflict between good and evil, which is lived out in our world and even within us,” he said.

“Aware of this decisive challenge, it would be foolish to give in to evil or even just try to remain neutral,” he said. “On the contrary, everyone is asked to take charge of his share of responsibility, putting into the field all his energy to counter selfishness, injustice, and indifference.”