At the Justice Department, one man has played a central role in two of the most controversial racialist policies of the Obama Administration – Associate Attorney General Thomas Perrelli. This bundler of huge campaign contributions for the Obama Campaign is now the second highest ranking Presidential appointee at the Justice Department. Perrelli is best known for his central role in dismissing the slam dunk voter intimidation case brought and dropped against the New Black Panther Party. But the leftist Perrelli has outdone himself. 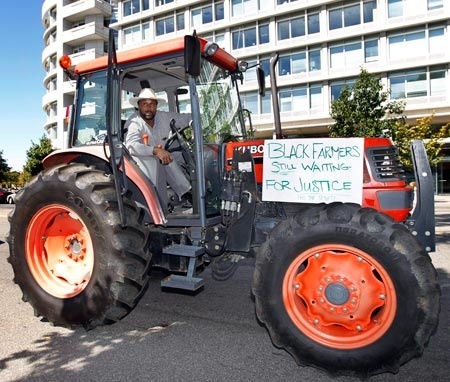 This week, the House passed a $4.6 billion payout to American Indians and black farmers as part of a settlement of alleged race discrimination claims. BigGovernment.com has reported extensively, on the “Pigford II” settlement and how it promotes fraud. Worse than fraud, it represents a race-driven political payoff by the Obama Administration to a favored political constituency.

Nothing happens in Washington like the Pigford settlement without the Justice Department. The DOJ, acting as the nation’s law firm, was intimately involved in piloting the Pigford settlement through Congress and reaching similar settlements with other identity politics plaintiffs. Perrelli ran the show at Justice in all of these efforts.

Like the black farmers, Hispanic farmers made claims of racial discrimination in the administration of Agriculture Department loans. But Hispanic farmers added noisy street protests outside of the Justice Department’s headquarters. No wonder Perrelli’s DOJ made a settlement offer of $1.3 billion in this lawsuit. And over $680 million will flow to Indian claimants as part of the Perrelli approved “Keepseagle” lawsuit settlement.

Billions of taxpayer dollars will now flow to black, Hispanic, women and Indian farmers, or those who thought about farming. In the administration of the original Pigford settlement in the 1990’s, even city dwellers who never farmed received payouts. After all, the “discriminatory” policies discouraged them from becoming farmers.

The Justice Department usually plays hardball when it comes to monetary settlements. In fact, the DOJ lawyers, including Perrelli, have an ethical obligation to protect the interests of the United States. But like the New Black Panther dismissal, none of old rules apply anymore.

Perrelli became the administration cheerleader for a colossal payout to the Hispanic, Indian and black farmer claimants. And just like the Pigford and Keepseagle claimants, the New Black Panthers seemed to have friends in high places inside Justice.

Perrelli played the central role in rushing a resolution to these claims before the Republicans took control of the purse strings in January. Instead of fighting hard to limit the exposure of the United States, the claimants had a fellow traveler on the opposite side of the negotiating table.

Similarly, Perrelli was behind the dismissal of the already won DOJ case against the New Black Panthers who organized and ran an armed voter intimidation effort the day Obama was elected. Justice officials acted as advocates for the New Black Panthers more than they sought to protect the ballot box from armed thugs.

Did Perrelli’s zeal to have the case dismissed have anything to do with the New Black Panther’s endorsement of candidate Obama during the primaries?

Judicial Watch sued the DOJ under the Freedom of Information Act to obtain Black Panther documents. They uncovered stacks of emails between Perrelli and his top political lieutenants supervising the lawsuit. They reveal Justice Department political appointees, including Perrelli, intimately involved behind the scenes in driving the dismissal.

Of course the documents contradict testimony given under oath over and over again to Congress and the Civil Rights Commission that only career civil servants were involved in the dismissal. This accuracy-challenged testimony came from both Attorney General Eric Holder and Assistant Attorney General Tom Perez.

Perrelli was the Justice official most responsible for the sketchy windfall settlements to black, Indian and Hispanic farmers. Instead of protecting the interests of the United States, he helped line the pockets of the President’s closest political allies. This is hardly surprising to anyone who followed Perrelli’s central role in ensuring that the New Black Panthers escaped sanctions for armed voter intimidation. You can’t beat having friends in high places.