Rose Hamid, an Islamic protester who made headlines when she was removed from a Donald Trump rally in South Carolina Friday night and attempted to position herself as a victim of ‘Islamophobia’ thereafter, has a history rife with extremist advocacy.

In a CNN article titled, “Silently protesting Muslim woman ejected from Trump rally,” Hamid, 56, is described as an innocent “flight attendant” who came to the rally in hopes that Trump supporters could better understand Muslims. When the Republican frontrunner started to discuss the refugee situation in Syria and President Obama’s policies in the region, a group of protesters alongside Hamid started a “commotion,” the Washington Post reports. Then, the group–who were sporting provocative yellow stars reminiscent to those that Jews were forced to wear under the Third Reich–was promptly ejected from the rally.

“The ugliness really came out fast and that’s really scary,” she told CNN. “I figured that most Trump supporters probably never met a Muslim so I figured that I’d give them the opportunity to meet one.”

The Council on American Islamic Relations, an Islamic advocacy group, has demanded  Trump apologize immediately for allowing Hamid to be removed from the rally by security, arguing it sends a “chilling message” to Muslim Americans.

Throughout this fiasco, Hamid has frequently been described as an innocent bystander without a political agenda– a mere citizen who wanted to share her voice.

But Breitbart News has learned that Hamid is not simply a “flight attendant,” but is also an Islamic activist who apologizes for Palestinian terrorism and promotes radical Imams.

As President of the Muslim Women of the Carolinas, Hamid has consistently promoted anti-Israel propaganda and has excused Palestinian jihadi terrorism as “resistance” against “occupation.”

“For anyone who wonders why Palestinians are resisting the apartheid, oppressive occupation of Israel, here’s one of the MANY MANY reasons,” she wrote in September 2014 on her Facebook page, following the summer war between Israel and the Palestinian terrorist group Hamas: 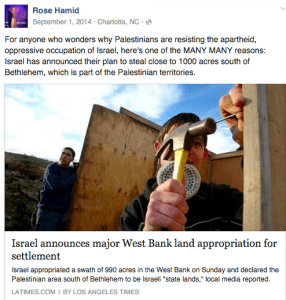 On September 3, 2014, she commented on the Jewish state: “Israel does not want peace, they want land and they want to ethnically cleanse the Palestinians from that land they have lived on for generations.”

Two months earlier, she linked to a Palestinian propaganda film, writing: “For those asking why Palestinians are resisting the Israeli occupation,” again apologizing for acts of terror. “This video is a true representation of some of what I’ve seen and been through,” she claimed. 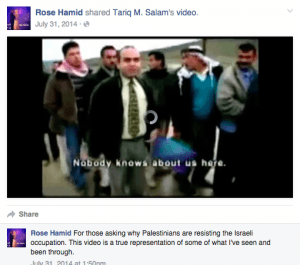 In July 2014, Hamid promoted a petition that described Zionism as a “racist apartheid movement.” The petition claims Jews in Israel are “ethnically cleansing” the Palestinians in the region.

A review of Hamid’s Facebook page shows that she did not once condemn Hamas, the militant Palestinian jihadi group that started the 2014 war, but demonized Israel dozens of times.

Hamid’s Muslim Women of the Carolinas group has in the past promoted an event with Imam Siraj Wahhaj, an unindicted coconspirator in the trial of the 1993 World Trade Center bombing. Wahhaj, a 9/11 truther, has called for the creation of an Islamic state in the United States.

Breitbart News has also found that the man standing next to Hamid at the Trump rally shares comparable views.

Marty Rosenbluth, the man standing next to Hamid at the Trump event, is an anti-Israel activist, a proud Communist, and a Bernie Sanders supporter, according to comments made on his Facebook page. In December, he bragged about his custom-made Arabic-text “Workers of the World Unite” banner that was made while “I was working with the General Federation of Palestinian Trade Unions.” Rosenbluth is also a pro-bono lawyer for illegal aliens, according to an Indy Week profile from January, 2013. 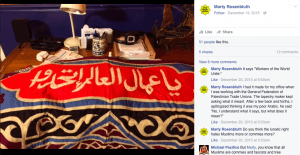