In a full-page ad in the Janesville Gazette, Wisconsin businessman Paul Nehlen calls on Wisconsin workers to “dethrone” House Speaker Paul Ryan on his August 9th primary and save the nation from the Trans Pacific Partnership (TPP) agreement and open borders.

“Wisconsin has an open primary,” the ad states. “All Wisconsin workers must unite on August 9th to dethrone ‘Open Borders’ Paul Ryan and stop the Ruling Class. Do it for American workers. Do it for our Country.”

The ad prominently features a picture of Paul Ryan smirking. Underneath it—in the background— is a picture of the now-shuttered Janesville GM plant, which had been a fixture of the community for decades and had once employed more than 7,000 Wisconsin workers. 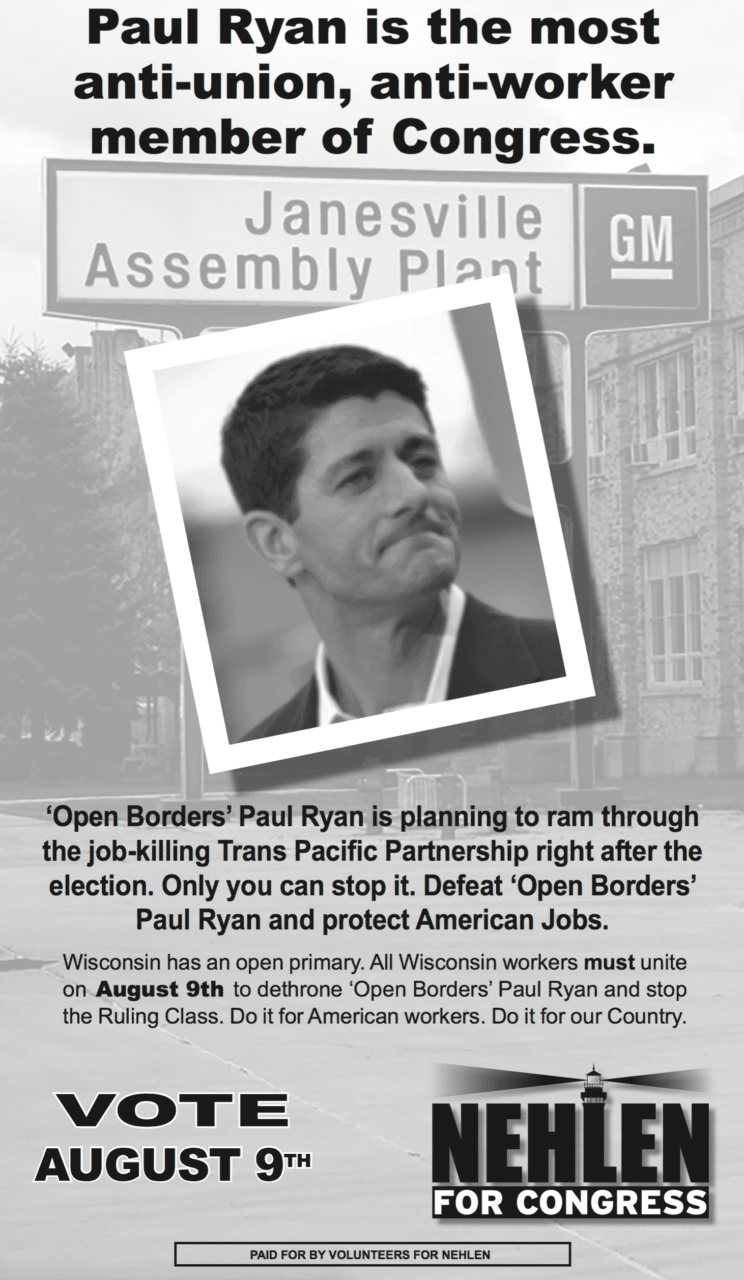 Business Insider has described the image of the large, abandoned Janesville GM factory as a “symbol of this city’s descent into economic calamity.”

Earlier this week, the Nehlen campaign released a 60-second video, which featured the endorsement of a laid off Janesville GM worker, who identifies as a Democrat.

“Janesville had—at one time—had the best workforce in General Motors. I had a good job. I was happy with my job. I really liked my job,” the laid off worker told viewers. “I wanted to work ‘til the day I died.”

But then “they shut the plant down,” the worker explained. “I have no love for Paul Ryan… I wouldn’t vote for him for dog catcher.”

The Janesville worker said that he supports Nehlen because “he’ll bring the jobs back—I’m all supportive of that. I back him up 100 percent.”

Paul Ryan has a long history of advocating for globalist policies on trade and immigration. NBC’s Chuck Todd recently described Paul Ryan as “an internationalist” who supports the “open borders” ideology on immigration.

Indeed, Ryan has repeatedly made the case for enacting an open borders immigration system that would allow people to freely and legally enter the country without any firm limits—similar to the uninhibited immigration policy European nations have within the EU.

During his Tuesday CNN town hall interview with Jake Tapper, Ryan reiterated his desire to bring in more foreign workers—even though 94 million Americans are operating outside the workforce, and 83% of the American electorate wants to see immigration levels frozen or reduced.

On trade, Ryan worked as President Obama’s “partner” in his effort to fast track the Trans-Pacific Partnership— even though Wisconsin suffered a net loss of nearly 40,000 jobs in 2015 alone due to the U.S. trade deficit with TPP countries.

In a 2015 Wall Street Journal op-ed, Ryan described the TPP as a “historic” agreement, which “would mean greater access to a billion customers for American manufacturers, farmers, and ranchers.”

“A successful TPP would mean greater American influence in the world and more good jobs at home,” Ryan wrote separately.

Ryan has not expressed concern over the trade agreement’s establishment of a global governing commission, which would have significant implication for U.S. sovereignty. Sen. Jeff Sessions has described the international governing commission as a sort of “Pacific Union,” that bears resemblance to a “nascent European Union.”

New reports indicate that the TPP could be brought up for a vote during the lame duck session of Congress, after Ryan’s primary election.

During his recent press conference in front of Ryan’s border wall, Nehlen said that Ryan supports the open borders agenda on trade and immigration because he is beholden to his globalist donors.

“Can you name one time when Paul Ryan fought as hard for you and your family as he’s fought for corporate America?” Nehlen asks. “Paul Ryan has sold out his district to his corporate masters. On August 9th, the voters of Wisconsin have a historic opportunity: vote Ryan out and declare your freedom… On August 9th, you can kick out every transnational elite for whom national borders are seen as merely obstacles to the flow of cheap goods and labor.”