Following a new primary election poll showing that House Speaker Paul Ryan has plummeted to well below 50 percent in his home district, Ryan is out with new mailers assuring Wisconsin voters of his desire to secure the border, and urging them to support him in his contentious August 9th primary election.

The new mailers touting Ryan’s support for border security is interesting given that just last year, Ryan championed a spending bill that fully funded President Obama’s open borders agenda– including funding sanctuary cities, executive amnesty, and the release of criminal aliens. The mailers also come amid new reports indicating that, one month after his election, Ryan plans to bring up “criminal sentencing” measures that could release thousands of criminal illegal aliens from prison onto the streets.

“Keeping America safe is a big job. And it’s the most important one there is,” the Ryan mailer reads. “Protect our Homeland— that means securing the border, confronting Islamic Terrorism, and tackling new threats by stopping them from reaching our shores… Paul Ryan for U.S. Congress… Vote Tuesday, August 9th” 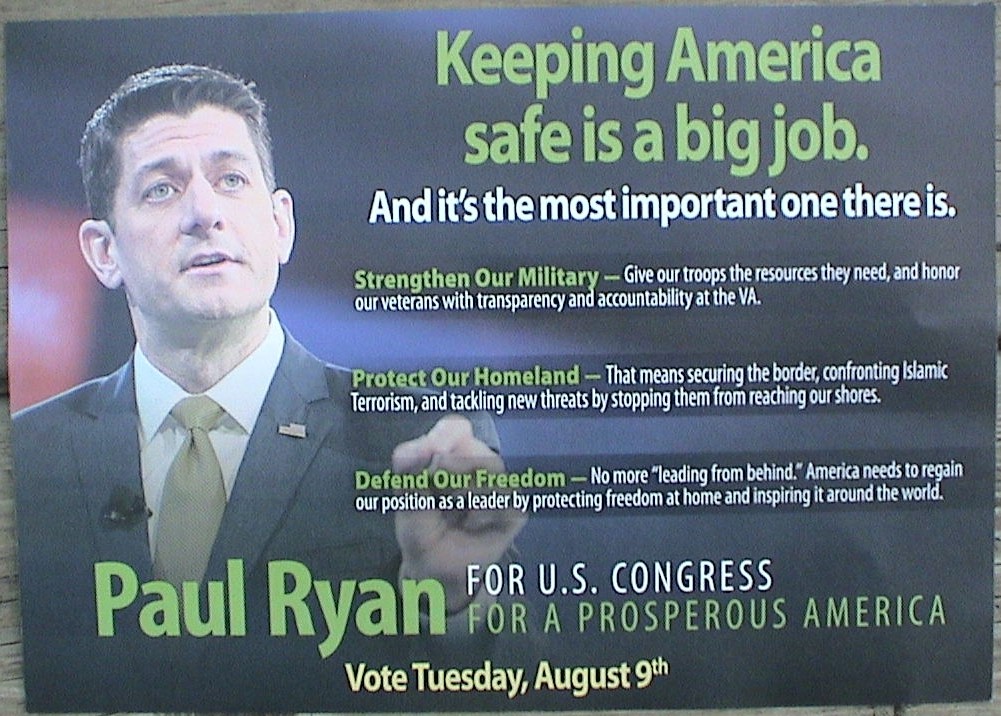 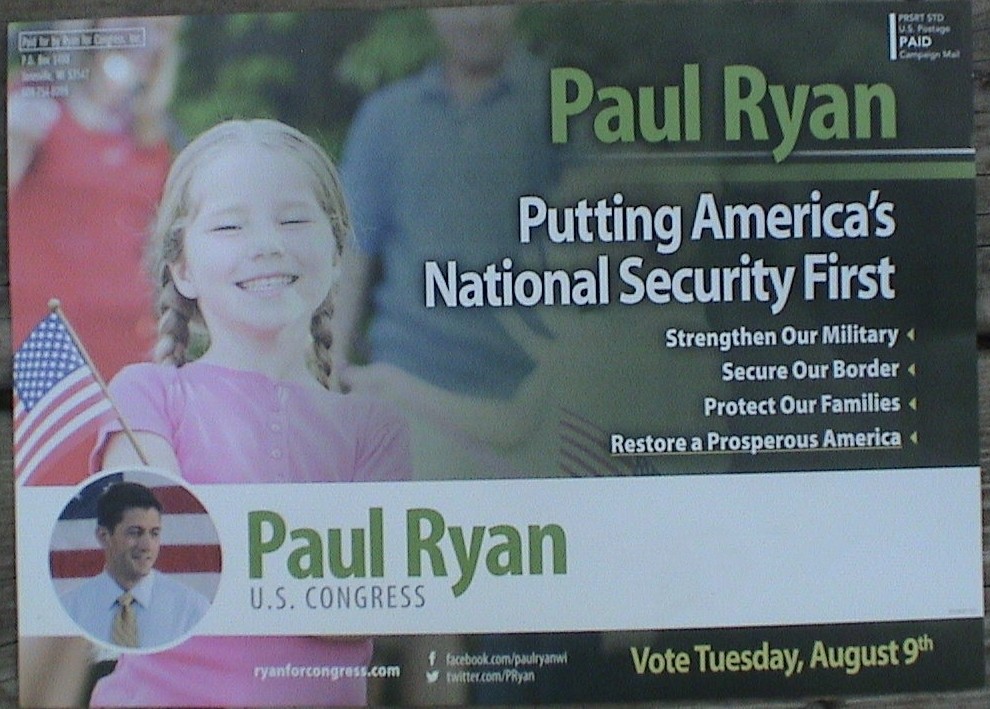 However, new reports indicate that immediately following his primary election, Speaker Ryan plans to bring up legislation that could release thousands of criminal illegal aliens from prison and into American communities.

As Roll Call reports, “The House will take up legislation to overhaul the criminal justice system in September, Speaker Paul D. Ryan said.”

Last October, the President of the Immigration and Customs Enforcement (ICE) Union— which represents approximately 5,800 frontline ICE officers, agents and personnel who are responsible for enforcing America’s immigration laws— wrote a letter to the Senate Judiciary Committee expressing opposition to the so-called “criminal sentencing reform” measures.

The ICE Union warned that some of the discussed proposals could result in the “mass release of criminal aliens from federal prison.” ICE highlighted the proposal’s impact on public safety, and noted that it could “further hampe[r] immigration enforcement within the United States.”

“According to a recent article in the Washington Post, 1 in 3 of the 6,000 federal prisoners that the Department of Justice recently handpicked for early release is an alien,” wrote ICE Council President Chris Crane. “I understand that both houses of Congress are also exploring legislative measures that could lead to the release of additional criminal aliens. Notably, these releases will be in addition to the thousands of criminal aliens who are being released into communities from sanctuary jurisdictions across the country every month.”

“Countless preventable crimes against children, rapes, robberies and murders will most likely occur as a result of these proposed mass release,” Crane added.

Interestingly, Ryan’s mailer does not list a single action Ryan has actually taken—in his seventeen years in Congress— to “secure our border” or stop the threat of radical Islam from “reaching our shores.”

While Ryan is now sending out mailers on border security, he has spent two decades pushing for policies that would effectively open America’s borders—including actions he has taken from his powerful position as House Speaker.

Ryan voted to fund Obama’s still-running 2012 executive amnesty for illegal aliens who allegedly entered the country as minors. Ryan’s bill also rewarded sanctuary cities with federal grants. He also provided funding for the resettlement of illegal aliens within the United States, the release of criminal aliens, and tax credits for illegal aliens.

Ryan’s spending bill also funded an expansion of Muslim migration, bringing the total number of visas for Muslim migrants this year (temporary and permanent) to nearly 300,000.

“The only thing more disturbing than Paul Ryan’s refusal to secure the border is the extent to which he is comfortable lying about it,” Nehlen said.

“As long as Paul Ryan is in Congress, immigration will never be reduced, the border will never be secured, radical Islam will never be kept off our shores, and our children will never be safe,” Nehlen continued. “He is wholly owned by his donors, and his donors want open borders. When was the last time Ryan ever fought hard for something that his donors opposed? If Ryan remains, we can kiss our borders, our safety, and our sovereignty goodbye.”

This is not the first time Ryan’s controversial position on immigration has been misrepresented to the Republican electorate. In 2013, an affiliate of Mark Zuckerberg’s decidedly pro-amnesty lobbying group ran an ad defending Ryan and claiming that Ryan opposes “amnesty.”

Politico reported that “the spot from the FWD.us affiliate begins with a picture of Ryan and says, ‘Amnesty? Not a chance,’ and goes on to say the House budget chairman is looking at a ‘conservative solution’ to the issue of immigration.” Zuckerberg’s pro-amnesty group spent $350,000 on the ad-buy to convince conservative voters that Ryan does not support amnesty— even though Ryan supports giving citizenship to illegal immigrants.

“Open Borders is in his ideological DNA,” NumbersUSA President, Roy Beck, has explained. “Open borders seeps out of every pore of his being. This isn’t personal, it’s just who he is… Paul Ryan is the heart and soul of crony capitalism.”

The documentary revealed that between 2013 to 2014, Ryan worked with open borders advocate Luis Gutierrez to push the Rubio-Obama amnesty agenda. Gutierrez has previously said, “I have only one loyalty…and that’s to the immigrant community”.

During the 2013 push to pass amnesty, Ryan told a group of Hispanic voters that he believes his job of a U.S. lawmaker is to put himself in the shoes of foreign citizens living in foreign countries— such as a “gentleman from India who’s waiting for his green card” or the illegal alien “DREAMer who is waiting— and put forth U.S. legislative solutions to improve the lives of those foreign citizens.

At a joint event with Gutierrez in 2013, Ryan made the case for dissolving borders—declaring unabashedly that the United States “is more than [its] borders.”

Two years later, Gutierrez was one of Ryan’s earliest endorsements for House Speaker.

“Paul Ryan and I talk,” Gutierrez told the filmmakers in 2014. “What we do with Ryan,” Gutierrez explained, “is he puts together a bunch of bills, one of which is legalization, and that’s the one we join him on. The legalization is good enough that I can go and say we need to get in bed.”

Gutierrez told filmmakers that their collaboration had to be conducted in secret, so as not to tip off Republican voters. “You feel like you have to kind of sneak around to have dinner with these guys,” Gutierrez’s communications director, Douglas Rivlin, said, referring to his secret meetings with House Republicans to push amnesty. “Unlike some of you [expletive deleted], I don’t mess around with my wife, so–but let me tell you–right? I feel like I’m sneaking around right on my Party … when I have dinner with you guys,” he said.

It is perhaps interesting that Ryan is now choosing to campaign on border security given that he has taken so many actions throughout his career to effectively dissolve national borders.

In doing so, Ryan appears to be taking a page out of the campaign playbook of ex-House Majority Leader Eric Cantor. In 2014, when Cantor’s primary race began heating up in Virginia’s 7th Congressional District, Cantor’s campaign began distributing misleading mailers claiming that the pro-amnesty House Majority Leader was actually opposed to amnesty.

As Breitbart News reported at the time, “House Majority Leader Eric Cantor (R-VA) is at it again. After sending a deceptive anti-amnesty mailer last week to voters, Cantor’s campaign sent out another this week just days before his June 10 primary against Dave Brat, who has been attacking Cantor on immigration. The new mailer touts the “conservative” Eric Cantor who is “stopping” the “Obama-Reid plan to give illegal aliens amnesty.’” 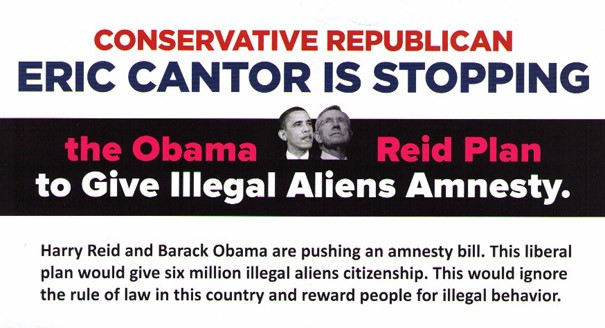