In making Donald Trump’s temperament the key issue in her presidential campaign, Hillary Clinton has conveniently forgotten Jesus’s famous admonition: “He that is without sin among you, let him cast the first stone.”

Hillary is in no position to cast stones.

I should know: I’ve been researching and writing about her for almost fifteen years, and in my new book, Guilty as Sin, I report that the smiley, stick-to-the-script Hillary people see in public is not the real Hillary Clinton at all. 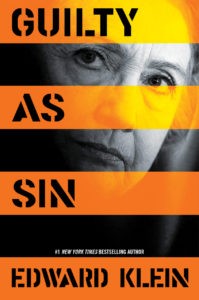 Behind the scenes, she is often totally out of control—screaming and sometimes even physically attacking people, including her husband and campaign workers.

Hillary’s combative behavior is nothing new; she’s been that way all her life. For my 2005 book The Truth About Hillary, I interviewed Hillary’s grammar school classmate, Jim Yrigoyen, who told me the story of being ordered by Hillary to guard a warren of baby rabbits, and not give any of them away to neighborhood boys. When he did, recalled Yrigoyen, “Hillary hauled off and punched me in the nose.”

She’s been using people as punching bags ever since. Back in 1974, when 26-year-old Hillary worked for Bernard Nussbaum, a senior member of the House of Representatives Watergate Committee, she blew up after Nussbaum expressed doubts that Hillary’s 28-year-old boyfriend, Bill Clinton, would one day become president.

“She looks at me and says, ‘You don’t know a goddam thing you’re talking about’,” Nussbaum recalled. “’You’re a blank. You’re a blank.’ She used strong curse words that she uses. She started bawling me out.… She walks out and slams the door on me.”

For as long as her friends have known her—going back to her days at Wellesley College in the 1960s— Hillary has sworn like a drunken sailor. Here are some choice examples from well-researched books on Hillary’s vulgar mouth:

According to an oral history of the Clinton presidency conducted by the University of Virginia’s Miller Center, Hillary was impossible to work for when she was first lady.

“She just let everybody have it,” said Leon Panetta, who served as Bill Clinton’s chief of staff. Panetta recalled an aide telling him, “The first lady just tore everybody a new ass—e.”

Joan Baggett, who served as assistant to President Clinton for political affairs, said aides were afraid to take on Hillary even when she was wrong.

“She would blow up over something that she misinterpreted,” Baggett said. “I remember one time in one of these meetings where she was blowing up about [Bill Clinton’s] staff and how we were all incompetent and he was having to be the mechanic and drive the car and do everything that we weren’t capable of.”

Fast forward to the 2016 presidential campaign, and Hillary is still at it—still blowing up at the least provocation.

“She has had screaming, child-like tantrums that have left staff members in tears and unable to work,” one of her campaign workers told me. “People have walked out from her Brooklyn campaign office and while they were on the campaign trail with her. At one point recently, she was berating a low-level campaign worker for making a scheduling mistake. The girl had the nerve to walk away from her, so Hillary grabbed her arm and twisted it.”

Sometimes, when she gets worked up, Hillary grabs a handful of her hair and in an odd mannerism that her friends describe, she yanks at the hair so hard that it looks as though she is trying to pull it out.

Did you ever hear of Donald Trump trying to pull out his hair?

Did you ever hear of Donald Trump screaming at campaign workers?

Did you ever hear of Donald Trump physically attacking someone?

Did you ever hear of Donald Trump using curse words in practically every sentence?

Hillary does all those things.

Does that sound like a woman who has the temperament to be president of the United States?