TALLAHASSEE, FL – Hillary Clinton’s running mate Sen. Tim Kaine (D-VA) urged students at Florida State University to get to the polls before Election Day at a campus rally on Friday.

Before a crowd of several hundred students at FSU’s Oglesby Union State Ballroom — cordoned off to make the audience appear more compact — the Democratic vice-presidental nominee cited three reasons to vote early: potential Russian involvement in the election process, Trump’s claim of election rigging and the difficulty of electing a woman to be president in the United States.

Trump’s response to the election results are among those things Democrats cannot take for granted, according to Kaine.

“Donald Trump is trying to whine and complain and say it’s all rigged,” he continued. “You know afterwards he is not going to accept responsibility if he loses. He’s going to blame it all on our system or something. If we win and we win big, he can whine all he wants but other won’t follow him.”

Finally, Kaine argued, Clinton’s gender is another reason her supporters should get to the polls early and not leave her election to chance.

“The last reason we can’t take it for granted is Hillary is trying to do something that’s never been done,” Kaine added. “It’s never been done. If it was easy for a woman to be president, then there would have been a woman president. The United States Congress – 19 percent are women. That’s the most we’ve ever had. That makes us 75th in the world, below the global average … We’re bad at electing women to federal office. She was a trendsetter and a pathbreaker but as a nation, we’re not good at this. And that means we can’t take it for granted.”

Kaine was joined by former NASA astronaut Mark Kelly and former Rep. Gabby Gifford’s (D-AZ), both of who are Clinton supporters and gun control activists. 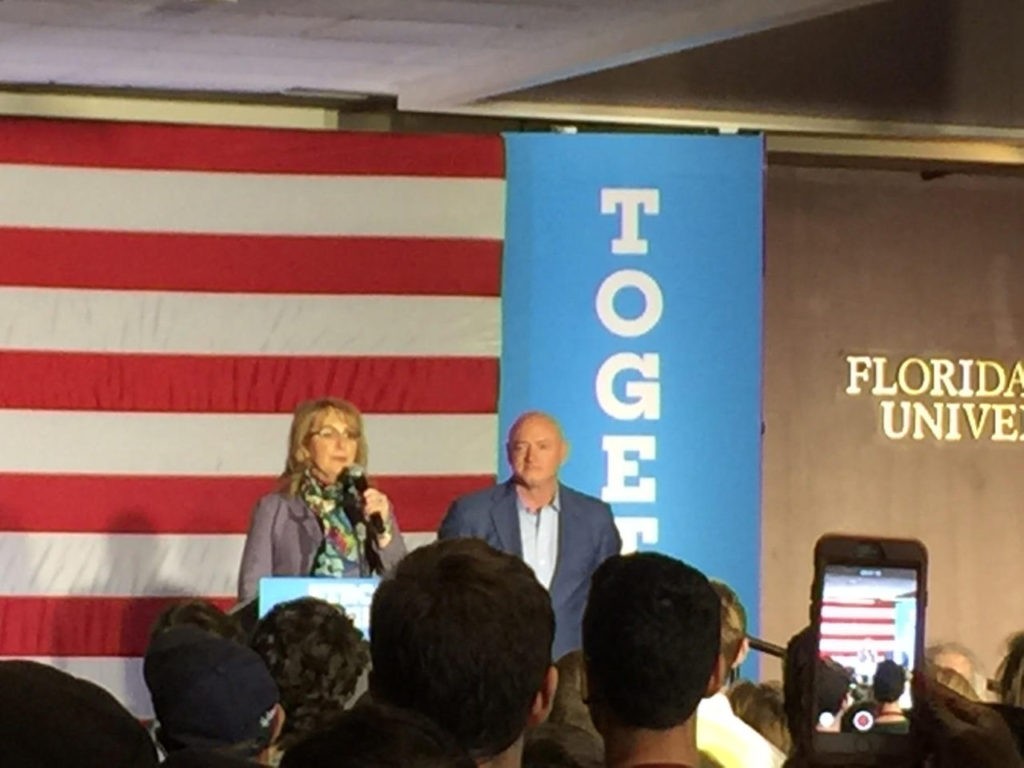 Kaine’s appearance comes as both candidates are doubling down on their focus on winning Florida’s 29 electoral votes.

Clinton has a lead in most statewide polls. However, in recent days polling has started to trend in Trump’s direction, including a Bloomberg News poll that has Trump ahead by two, but still within the margin of error.

Kaine, however, has been hit or miss in the Sunshine State. Earlier in the week, Kaine hosted an event in West Palm Beach, FL that drew a very small crowd. And yesterday, the campaign cancelled an event the Democratic vice-presidential nominee had scheduled in Sarasota.

In addition to urging early voting, Kaine delivered his usual stump speech — laying out what he saw as five priorities for him and Clinton if they are elected: Jobs and small business, cost of college, climate change, equality and gun control.

Kaine also made no mention of the FBI’s decision to reopen the investigation into Clinton’s email server.