Retail giant Target has abruptly shuttered two high priority projects which were intended to guarantee the company’s future, amid the public boycott provoked by the company’s insistence on transgender-friendly, mixed-sex, dressing rooms.

Target announced the end of two projects as the stock price hit $64.77 at market close on Feb. 8. That’s down from $83 when the boycott began once the company made its transgender policy change on April 19. The stock price drop has slashed roughly $10 billion from the company’s value on Wall Street.

Target announced it was shutting down a project billed as the “Store of the Future.” The project was aimed at developing a new outlet design that would consist of a smaller upfront retail store fronting a warehouse with robots picking items for the customers up front, recode.com reported. The closure was so sudden that it caught the project’s manager by surprise.

This project was expected to incorporate its Internet-based e-commerce offerings and was also set to offer space for customers to attend classes or have “meet-ups.”

The second project was codenamed “Goldfish,”and it was intended to create an online marketplace upon which other retailers and manufacturers could sell products to customers through Target. 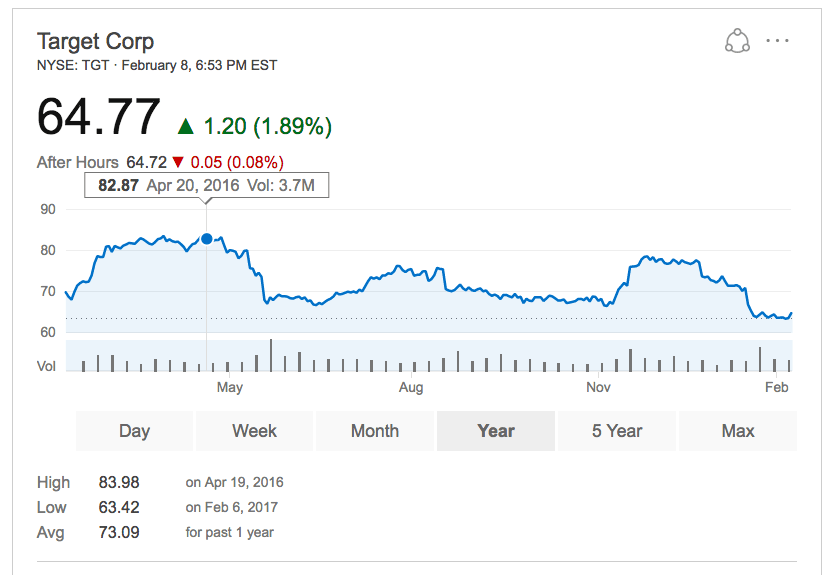 In a statement, Target explained its decision as a normal ebb and flow of business.

At Target, we regularly pause to evaluate our business and have to make tough choices about where our company is best served to invest our time and resources. We recently made some changes to the innovation portfolio to refocus our efforts on supporting our core business, both in stores and online, and delivering against our strategic priorities. Target remains absolutely committed to pursuing what’s next. We see a tremendous opportunity to drive innovation in areas that will fuel our growth both in the short and long-term in areas such as digital, technology, supply chain and merchandising.

Target’s focus on transgender rights has prompted it to end the use of single-sex bathrooms and changing rooms. The same trend is underway nationally, where pro-transgender laws are eliminating single-sex facilities and institutions.

In December, a poll showed that only 22.7 percent of respondents endorsed the transgender claim that people should be allowed to change their recorded sex or “gender identity” on government documents whenever they wish. In contrast, 44.6 percent of respondents said people should be allowed to switch their legal sex, but only after first complying with medical or government criteria for male and female characteristics. Twenty-three percent opposed any sex-related change to identity documents, and 17.1 percent declined to answer.

Very few people try to live as members of the opposite sex. A study of the 2010 census, for example, showed that only 1-in-2,400 adults had changed their name from one sex to the other.