(Scott’s wife, Catherine McKenna, is the Eco Barbie currently serving under Prime Minister Justin Bieber as Canada’s Minister for the Environment and Climate Change, so perhaps we shouldn’t be too surprised by the lameness of the politics…)

And here’s another, from a pubescent left-wing activist and BBC regular called Owen Jones, which ought to bring up whatever there is left of your breakfast. 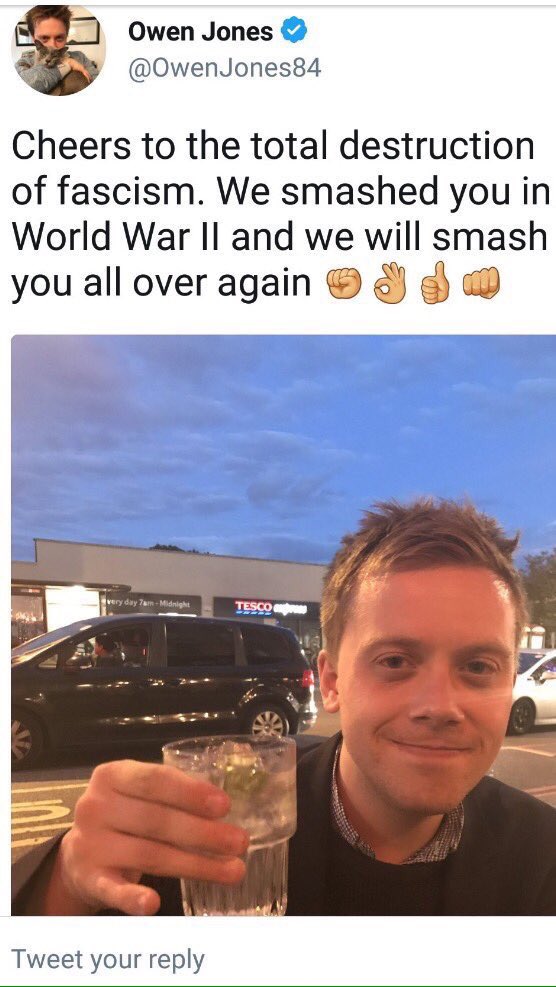 And here – dry heave, now, I fear – is a particularly smug and noisome offering from the deputy editor of what used to be a men’s style magazine, Esquire.

Did you see what they all just did there? Well, let me explain, with reference to a rather strange trip I took about 25 years ago, to Europe’s last (and worst) Communist tyranny, Albania.

The country had just opened up to the West after four decades of abject poverty and misery, most of them under the tyrannical Stalinist dictator Enver Hoxha. Albania was a prison state akin to North Korea. People who tried to escape were shot; food was meager; the cities were polluted and uglified with dreary communist architecture; everyone looked gray and miserable; freedom of speech was, of course, forbidden: there were spies everywhere and political prisoners ended up in jail or worse…

When I arrived, on what I believe was the second ever commercial flight allowed into the country from the West since the war, there was absolutely nothing to do in the country’s dreary capital Tirana except get drunk on incredibly cheap Skanderbeg brandy or visit the city’s one tourist attraction: the National Museum.

The National Museum — which we were all forced to see by our official guide whether we liked it or not — was largely dedicated to Albania’s role in the Great Patriotic War. What you and I would call World War II.

Now I’m very interested in World War II. I’ve read dozens of books on the subject and I’m fascinated by every last detail: the tactics, the strategy, the uniforms, the hardware, the personal experiences of the men and women who were there…

But even for a war buff, this was too much. Room after room after room in this enormous, warehouse-like museum consisted of weapons (small arms, mostly) from the Great Patriotic War. On and on it went, as if what Albania’s Communist partisans did from 1939 to 1945 was the ONLY thing in the country’s entire history that mattered.

Which, as far as the Communist regime was concerned, it was. Albanian history prior to Enver Hoxha — the era of King Zog, for example — had simply been airbrushed out of the country’s record books. Albanian history after the Great Patriotic War scarcely got a look in either because, hey, what history are you ever going to be capable of making when your economy is frozen in aspic by your Stalinist regime and your only engagement with the Western world is shooting up passing British naval ships?

Why do I mention all this? Because the game Communist Enver Hoxha played in Albania and the game Stalin played in the Soviet Union during and after the Second War War was exactly the same game the regressive left is playing now.

It’s a game whereby, according to their warped rules — which they invented — you can imprison or immiserate or tyrannize or even murder as many people as you like with impunity, because however awful you are, it’s OK because you’re not Hitler.

The people on their side of the political argument — first Occupy, then #blacklivesmatter, now Antifa: all of them in fact just different incarnations of the same, hard-left Black Bloc insurgency — have done some very ugly, violent, dangerous things and are certainly no friends of Western liberal democracy. But whenever they’re in any danger of being shown up for the nasty, freedom-hating, totalitarian thugs they are, they just use the same distraction technique that Hoxha and Stalin and other evil leftists have used for decades: “Everyone who disagrees with us is Hitler.”

This line has become such a commonplace of modern leftist propaganda it has become a meme: 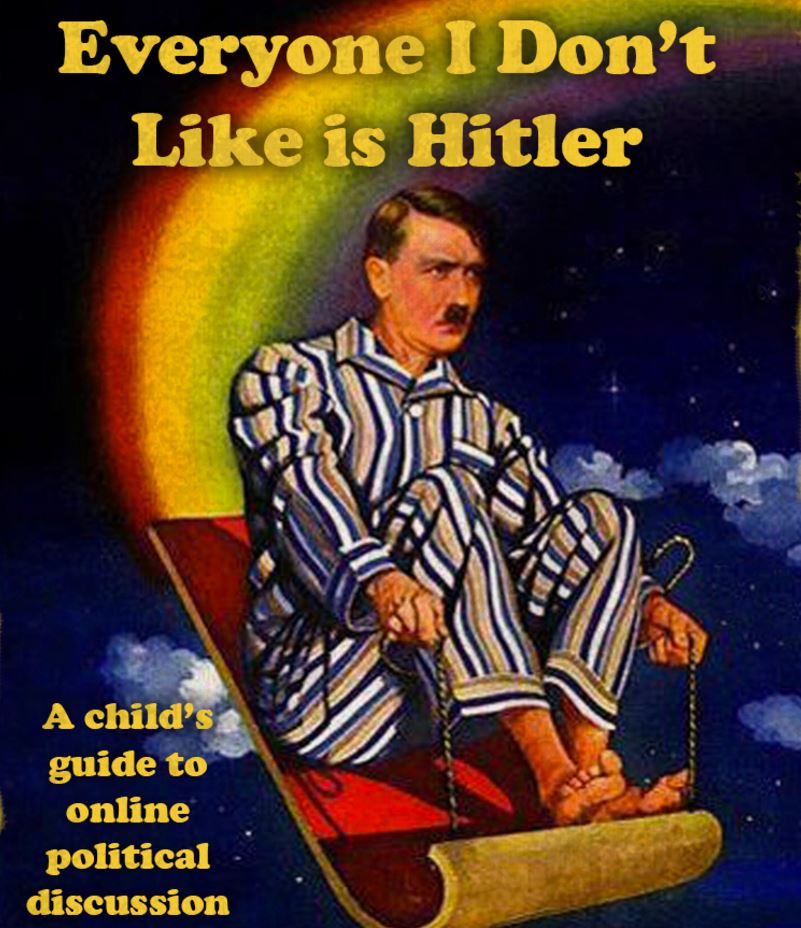 Jonah Goldberg discusses this in some detail in his book Liberal Fascism. It wasn’t because of their dissimilarities that the Nazis and the Communists so hated one another, but rather — see the bitter split between the People’s Front of Judaea and the Judaean People’s Front — because they had so very much in common. (The red in the Nazi swastika flag was a reflection of the party’s Socialistic leanings).

The reason that today we think of Hitler’s National Socialists and other fascistic movements as belonging to the right rather than the left is, Goldberg demonstrates, because Stalin branded them that way. Any rival movement of which Stalin disapproved — and that included everyone from Roosevelt’s Democrats to Trotsky — he branded “fascist.”

So every time a left wing person today spits out the term “fascist” and imagines that they are taking the moral high ground — what he or she is actually doing, unconsciously — is acting like just another useful idiot of a vicious, bloodthirsty, ruthless dictator who was responsible for killing millions more innocent people than even Hitler did.

Donald Trump has understood this perfectly well in his measured and reasonable responses to Charlottesville.

A politician of lesser conviction would have done what the likes of John McCain and Mitt Romney are doing in the U.S. and which politicians including Prime Minister Theresa May and Communities Secretary Sajid Javid are doing in Britain.

Neo-Nazis: bad
Anti-Nazis: good
I learned that as a child.
It was pretty obvious.

No, not the same. One side is racist, bigoted, Nazi. The other opposes racism and bigotry. Morally different universes.

Virtue signaling through the medium of fatal dishonesty, in other words.

It’s depressing enough when the regressive left plays this game. But when self-professed conservatives follow suit, we should really start to worry.

After all, the idea that organized groups of masked thugs with baseball bats and pepper spray should be given a free pass to do as much damage as they like, be it vandalizing statues or attacking people, just because they claim to be fighting against Nazis or against fascism ought to be offensive to the intelligence of anyone with even half a brain.

Yet the entirety of the MSM, vast swathes of our political class, and a significant chunk of the public appears to have fallen for it.

This isn’t just a sign of how gullible and/or ill-informed many people are, thanks to a combination of poor education, endless brainwashing, and relentless media bias. It’s also an indication of how fragile our civilization is and how vulnerable to the lies of the extremely well-organized and dangerous left.

Anyone who doesn’t get this basic and obvious point seriously needs his head examined.