Did you know that in President Bieber’s Canada it is now virtually illegal to express doubts about the existence of ManBearPig?

No, I wouldn’t have believed it either, till I learned via Lorrie Goldstein about the extraordinary criminal action brought in Canada by a bunch of eco-fascistic litigants against three climate skeptical organisations.

The complaint was filed by Ecojustice on behalf of six “prominent” Canadians, including former Ontario NDP leader and UN ambassador Stephen Lewis.

When it launched its complaint in December, 2015, Ecojustice told the National Observer it would press the Commissioner of Competition to refer the matter to the Attorney-General of Canada for “criminal charges against the denier groups.”

What’s really shocking is the reason the case was dropped by the Competition Bureau (an arm’s length agency funded by President Bieber to the tune of $50 million a year) after an investigation lasting 14 months.

No, the reason wasn’t because someone in Bieber’s administration suddenly realized that this would be an unconscionable abuse of state power to curtail freedom of speech and to adjudicate on scientific issues so contentious and moot as to be far beyond any government body’s area of competence.

Nope. It was simply that the Competition Bureau ran out of money.

The federal government won’t say if it has any immediate plans to boost funds for Canada’s competition watchdog so that it can resume an investigation into climate change-doubting advertising.

Last week, Canada’s Competition Bureau told National Observer it didn’t have enough resources to pursue a probe of websites and billboards that share false information about climate change unless new evidence is provided by members of the public that would help the bureau reboot its stalled investigation.

(Note, by the way, the aggrieved tone of the liberal newspaper reporting on this issue. In the New World Order which National Observer is clearly itching for President Bieber to impose on Canada, there should be limitless quantities of public money made available for the zealous prosecution of climate deniers, wherever they may be lurking.)

It is, as Goldstein says, like something out of Orwell’s Nineteen Eighty-Four.

It’s also a grotesque inversion of justice. As many of us in this parish are perfectly well aware, if anyone deserves prosecution for publishing criminally misleading material it’s the guys in the climate alarmism industry. 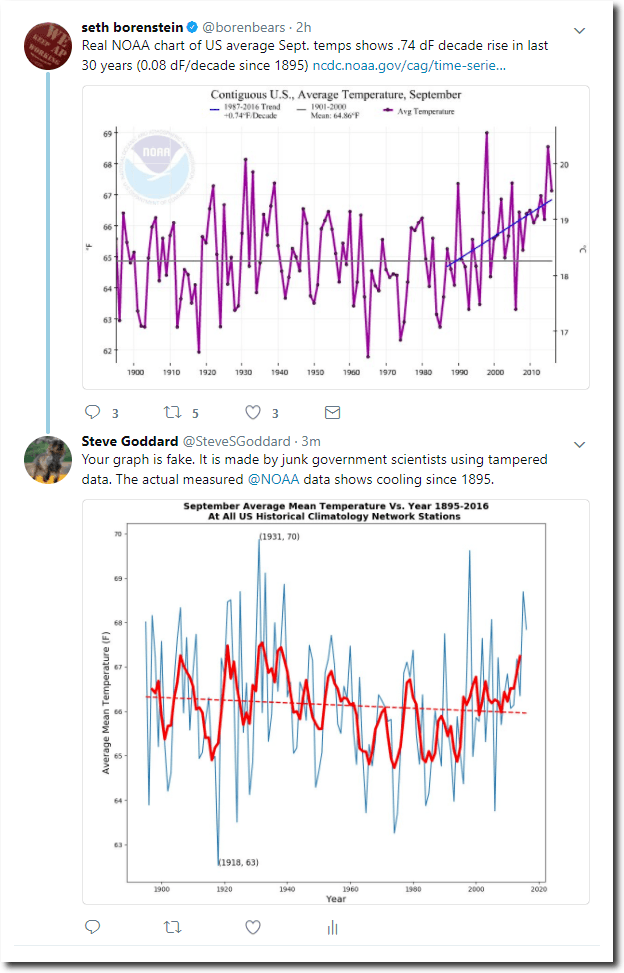 I’m not suggesting we should lock these guys up. Merely that if ever it came to trial before an honest judge and an open-minded jury, the skeptics would have a slam dunk case against the alarmists.

After all, the only bad thing climate skeptics have ever done is make a few dodgy scientists and a heap of rent-seeking businessmen sleep less easily in bed at night by questioning the quality of the data and the economics behind their Enron-style money-making scam.

But the Warmists, as I have argued before, have a charge sheet as long as your arm:

The Green Blob’s tentacles extend everywhere: into our kids’ classrooms (where they are brainwashed with environmental propaganda); into our universities (where whole departments have now been hijacked by green junk science—because hey, that’s where the money is); into the mainstream media (most of which repeats, unquestioningly, the spurious claims of impending eco-disaster put out by environmental activists and publicity-hungry university departments); into business, which now wastes billions on environmental compliance and billions more on energy costs artificially inflated by the almost entirely unnecessary government-mandated drive for renewables); into government (where few politicians, even now, have the nous to appreciate that they have been sold a pup and who still continue to inflict more “sustainable” initiatives on their hapless electorates); into the economy, where jobs have been killed and growth blighted by measures designed by eco-fascists on a self-admitted mission to destroy Western industrial civilisation; into the environment, which has been ravaged by the very things we’re told are supposed to help save it—from bat-chomping, bird-slicing eco crucifixes to those forests in the US which have been chopped down to create wood-chip biofuels to be burned at Britain’s Drax power station to the rare-earth minerals mined in appalling conditions in China to make wind turbines; into the cost of living (inflated by green taxes, regulations and tariffs), where in some cases people have been driven into fuel poverty and an early death because governments like Obama’s have caused electricity prices “necessarily” to “skyrocket” by mandating renewables over cheaper, more reliable fossil fuel.