With 88% of precincts reporting in the heavily-Democratic district that spans Queens and the Bronx, Ocasio-Cortez had crushed Crowley, 57.6% to 42.4%, a margin of nearly 3,600 votes.

CNN notes that Ocasio-Cortez is a self-described “democratic socialist.”

Crowley, currently in his 10th term and the chair of the House Democratic Caucus — ranked 4th in the whole caucus — was considered a possible future candidate for Speaker of the House, and had not faced a primary challenge in 14 years.

He has now become the first major casualty of the so-called “Resistance” — the left-wing movement that emerged to oppose President Donald Trump but has also clashed with the Democratic Party establishment. 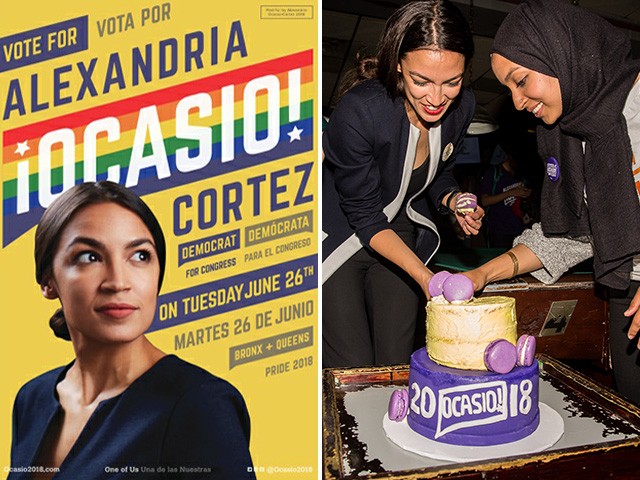 Left: a campaign poster for Ocasio-Cortez. Right: Ocasio-Cortez celebrates with supporters at a victory party in the Bronx. (Scott Heins/Getty Images)

Politico observes that Ocasio-Cortez “challenged Crowley on ideological and racial grounds.” She argued that the district needed a more left-wing representative, as well as someone who reflected the “majority-minority” demographic of the area, which has become increasingly Latino. (Or, as she prefers, “Latinx.”)

It’s time we say it: New York politics has an enormous misogyny problem. It has far-reaching consequences.

In NYC our Governor, Mayor, Council Speaker, and Queens Dem Boss are all powerful white men.

That’s not an accident. It’s a culture. #MeToo https://t.co/TB7f6BKNKC

Ocasio-Cortez ran on an explicit promise to abolish the federal Immigrations and Customs Enforcement (ICE) agency, as well as to nationalize health care.

This was @Ocasio2018's platform, taken from her office in Elmhurst, Queens —> pic.twitter.com/w9KqwRl00x

ICE is operating exactly as designed when it rips screaming children from parents. That’s exactly why we must abolish it.

We MUST have the moral and political courage to #abolishICE.

Weak half-measures do nothing. This is a defining moment of our time – the time to act is now. pic.twitter.com/0viiQ4qdz8

In the last days before the primary, Ocasio-Cortez traveled to McAllen, Texas to join left-wing protests against President Trump’s immigration policies. She organized a large volunteer contingent to canvass her district while she was away.

In order for me to go to the border 2 days before the primary, our whole movement nationwide had to come together & hold it down in New York City.

They did.@DFAaction, @justicedems & @BrandNew535 all sent staff to manage canvasses.

This is a massacre.

I hope my peers have the moral courage to call it such.

No state or entity is absolved of mass shootings of protesters. There is no justification. Palestinian people deserve basic human dignity, as anyone else.

Democrats can’t be silent about this anymore. https://t.co/wJGATOtDsR

She also attacked Crowley for his alleged support for the transfer of the U.S. embassy in Israel from Tel Aviv to Jerusalem.

In a bizarre twist, Rep. Crowley sent a woman with slight resemblance to me as his official surrogate to last night’s debate.@repjoecrowley’s surrogate said he is in full support of Trump’s embassy change in Israel last month (where 60 people died).

The community was in shock. https://t.co/LvNj0rlhFw

Ocasio-Cortez enjoyed the support of left-wing celebrities like Susan Sarandon, who hails from the area. Her campaign ads were sharp, innovative, and eye-catching. And she drew on widespread grassroots frustration with the Democratic Party establishment.

President Trump celebrated her win over one of his loudest critics:

Wow! Big Trump Hater Congressman Joe Crowley, who many expected was going to take Nancy Pelosi’s place, just LOST his primary election. In other words, he’s out! That is a big one that nobody saw happening. Perhaps he should have been nicer, and more respectful, to his President!

Trump also framed her win in terms of the overall 2018 contest:

The Democrats are in Turmoil! Open Borders and unchecked Crime a certain way to lose elections. Republicans are for Strong Borders, NO Crime! A BIG NIGHT!