Mexicans now strongly oppose the Central American migration through their nation, says a poll conducted by the Washington Post.

The massive shift in attitudes comes after President Donald Trump threatened to impose tariffs if the migration was not stopped.

The Mexican shift is a strategic success for Trump because it enables deeper cooperation by the White House and Mexican governments to block migrants — despite the U.S. establishment’s strong support for cheap-labor illegal migration into Americans’ workplaces, schools, and neighborhoods.

The poll’s positive results drew a negative reception at the Washington Post which conducted the face-to-face survey of 1,200 Mexicans in cooperation with Mexico’s Reforma newspaper:

More than 6 in 10 Mexicans say migrants are a burden on their country because they take jobs and benefits that should belong to Mexicans. A 55 percent majority supports deporting migrants who travel through Mexico to reach the United States.

Those findings defy the perception that Mexico — a country that has sent millions of its own migrants to the United States, sending billions of dollars in remittances — is sympathetic to the surge of Central Americans. Instead, the data suggests Mexicans have turned against the migrants transiting through their own country, expressing antipathy that would be familiar to many supporters of President Trump north of the border.

When Mexico’s President Andrés Manuel López Obrador agreed to step up Mexico’s immigration enforcement to avert U.S. tariffs, many analysts expected his base to be disillusioned. López Obrador had long advocated for migrants’ rights and the freedom of movement for asylum seekers.

The Post admits “López Obrador [now] gets relatively high marks for his treatment of migrants, with 44 percent saying he has done a good job on the issue while 27 percent rate him negatively.”

Together, the data shows a dramatic 64-point shift in just one year. 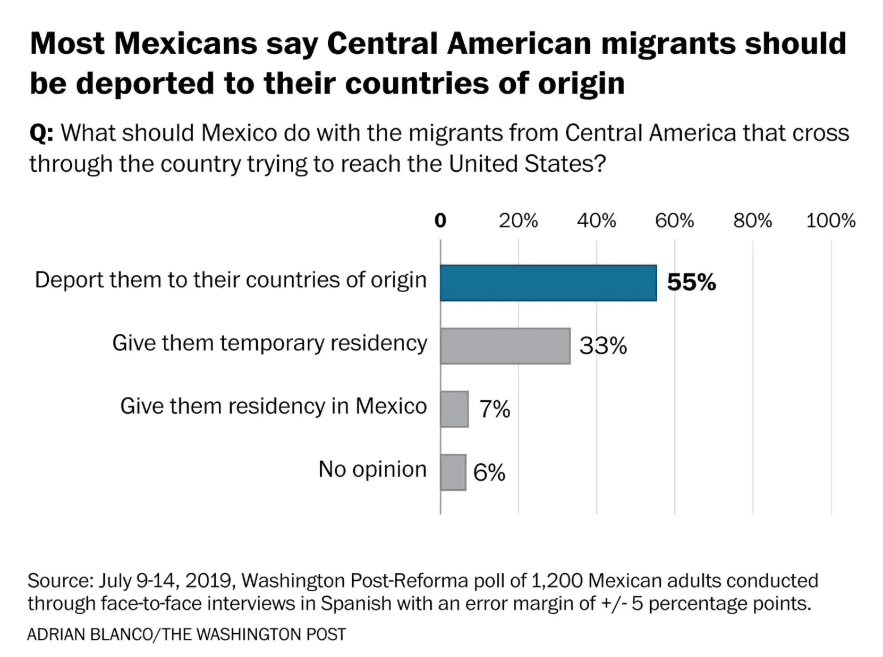 It also pushes Americans away from high-tech careers and sidelines millions of marginalized Americans, including many who are now struggling with fentanyl addictions. The labor policy also moves business investment and wealth from the heartland to the coastal cities, explodes rents and housing costs, shrivels real estate values in the Midwest, and rewards investors for creating low-tech, labor-intensive workplaces.