Billionaire left-wing donor George Soros has given another $500,000 to Democrat Gov. Gavin Newsom’s campaign to stop the California recall, bringing his total contribution to the effort to $1 million, making him one of Newsom’s top backers.

The California Secretary of State’s office reports three separate large contributions by Soros: a $250,000 donation in June to a committee called “Stop the Republican Recall of Gavin Newsom”; another $250,000 donation in early August; and the most recent donation of $500,000 before the end of August.

The Hill reports that major Democratic donors, including unions, are pouring cash into the battle to keep Newsom in office, as he faces an increasingly strong challenge from conservative talk radio host Larry Elder, who leads polls to replace him:

Reports filed with the California secretary of state’s office show that the Democratic Governors Association has given Newsom’s committee $5 million since the beginning of August, including another $1 million infusion on Tuesday.

Newsom’s top donor remains Netflix co-CEO Reed Hastings. The top individual donor is Republican businessman John Cox, who has given nearly $9 million to his own campaign. 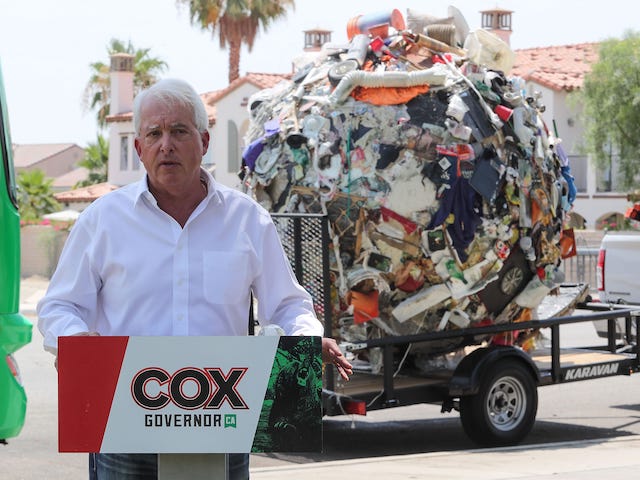 California Repubican gubernatorial candidate John Cox speaks in front of a large ball of trash meant to bring attention to the homelessness situation during a campaign stop in Palm Springs, July 13, 2021.
Cox and trash ball

Under California law, incumbents are not subject to the same campaign finance restrictions as challengers in a recall.