Connecticut Gov. Ned Lamont (D) issued a call Wednesday to the state’s General Assembly to convene in a special session to approve an extension of his emergency pandemic powers through February 15.

As of September 17, the Centers for Disease Control and Prevention (CDC) rated the state as having a “High Transmission” level with an increase of 17 percent in the rate of new cases per 100,000 from the previous week, but still making the most current number of new cases 126.

Lamont’s appeal for an extension of his emergency powers comes as CDC also noted Connecticut has a vaccination rate of 87.3 percent of those 18 years and older who received at least one dose of a Chinese coronavirus vaccine, and a rate of new COVID-19 deaths of 0.9 per 100,000 people.

Lamont acknowledged what he views as the state’s favorable standing to state legislative leaders:

Still, without our ongoing vaccination campaign, the damage from this highly contagious strain of the disease would have been much worse, and further increasing vaccination rates, along with continued use of masks and other protective measures, holds the best hope of preventing or reducing the effects of another surge from the Delta variant or even more contagious and harmful variants. The fact that we have the lowest case rate in the nation is due in no small part to the fact that Connecticut has the highest percentage of adults vaccinated in the nation and has consistently remained second in the nation in the percentage of our population that is fully vaccinated.

Nevertheless, Lamont said he intends to continue executive orders that require mandatory masks and social distancing in classrooms, including one that requires “unvaccinated persons age two and above to wear a mask when indoors and when they cannot maintain a distance of six feet from other persons and when they do not have a medical exemption.”

Other executive orders Lamont will seek to continue include mandatory full vaccination for long-term care staff, permission to the state Department of Public Health to “disclose a person’s vaccination status to a person’s health care provider, school nurse, or local health director.”

Additionally, Lamont will seek to extend the mandate requiring all teachers and child care workers to be vaccinated, unless they have a religious or medical exemption.

Lamont said he plans to issue a new executive order expanding the vaccination mandate for healthcare workers and facilities “who provide care to high risk individuals.” 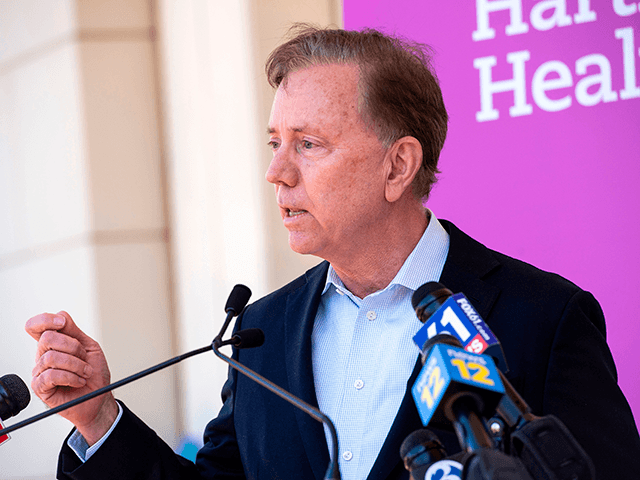 “Despite speculation to the contrary, the federal government has made it clear that we would not receive the roughly $2 million per quarter in FEMA reimbursement for such efforts with the executive order the emergency declarations that enabled it,” he wrote.

France told Breitbart News in a phone interview what he witnessed at the hearing was “the breakdown of government.”

“The primary role of government is the protection of individual rights,” he said. “And what we observed in the stories that people were sharing was the imposition of an edict that really impacted these families directly, in an ability to keep a roof over their head and provide food on the table, with a demand that they take the shot.”

France said no one from Lamont’s administration has come forward to explain the emergency situation that is requiring an extension of the governor’s powers.

“There is no emergency and, as I stated on the floor, COVID-19 is not an emergency,” he continued. “We have relatively low numbers of patients within our hospitals. And so our medical system is able to handle that. We have protocols in place across the state. There’s absolutely no reason for the governor to have autocratic control of the state.”

Welcoming these Afghan refugees is the right thing to do. #CTvalues

Last week, Lamont also touted the White House’s request that he accept hundreds of Afghan refugees into Connecticut in the wake of the Biden administration’s botched withdrawal from Afghanistan.

“The U.S. Department of Homeland Security has ensured Connecticut that these individuals will have all been vetted, in addition to having all necessary vaccinations, including for COVID-19,” Lamont said.

CDC noted it was aware of “some cases of varicella, mumps, tuberculosis, malaria, leishmaniasis, hepatitis A, and COVID-19 among evacuees.”

Two weeks ago, Lamont also kicked off a new fall tourism campaign to bring more visitors into his state.

“We are marketing this state with a $24 million budget over the next two years, tripling what we’ve done in the past,” Lamont boasted, Fox 61 reported.