“You are what we need to change about this culture,” the 135-pound belt holder told Breitbart Sports on the conference call for UFC 184.

The angry, animated answer came in response to a question about whether the UFC headlining a card with two women’s bouts would ultimately harm or help the cause of women’s MMA given that the ladies would not have the opportunity to convert the segment of men prejudiced against it who see elite female fights only on cards carried by Cain Velasquez, Jon Jones, or some other male athlete.

Rousey, a bronze-medal winning judoka at the 2008 Olympics, owns a perfect 10-0 record in mixed-martial arts. As Breitbart Sports has previously noted, Rousey “puts the ‘art’ in mixed-martial arts” through graceful judo throws and precision submissions. More beauty than brute, she has served as an effective, if thin-skinned, ambassador of a controversial aspect of a sport already repulsive to large segments of the population.

The stardom has led to a book contract, MetroPCS ads, an appearance in Sports Illustrated’s swimsuit issue, and a cameo in the upcoming Entourage movie. Asked about whether the extracurricular opportunities might distract her endeavors in the octagon, Rousey exhibited the fighting spirit she has displayed in the cage. The champion responded: “The reason why you doubt the ability that it could ever be done is the reason why you will never do anything that great.” 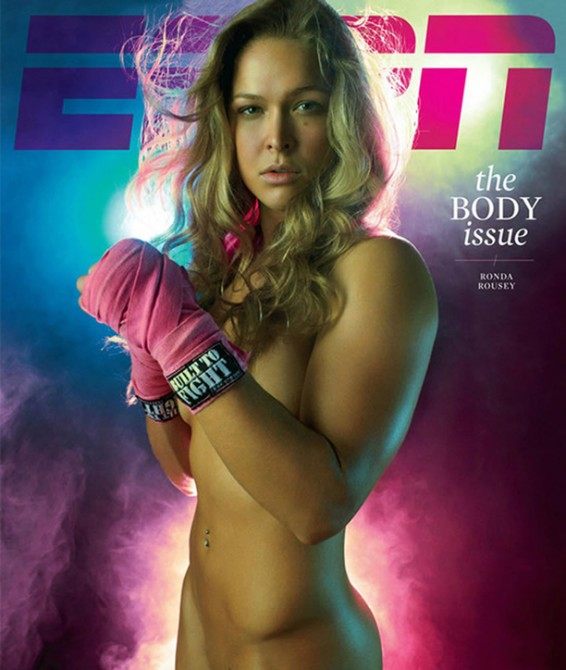 Rousey hopes to increase her mark on the sport with a victory over the similarly undefeated Cat Zingano at UFC 184. Raquel Pennington takes on promotional newcomer Holly Holm, one of the world’s most accomplished female boxers, in the co-main event at the Staples Center on February 28.

Rousey believes there’s a double standard that would preclude journalists from similarly inquiring about the popularity of lighter-weight male divisions that generally don’t draw as well as the welterweights, middleweights, light heavyweights, and heavyweights.

“Lighter divisions are a turnoff to some people,” Rousey points out. “But you don’t ask them about that. Like, ‘Oh, well, people just want to see heavyweights da-da-da-da-da.’” (Breitbart Sports, in fact, has asked such questions regarding the popularity of the lighter divisions of Conor McGregor, Benson Henderson, and other mixed-martial artists—see a separate post with a Henderson interview from last month—competing at weight classes that, like the women’s divisions, didn’t exist in the UFC just a few years ago.)

Ultimately, the box office and pay-per-view buys will determine whether the predominantly-male, cage-fighting audience will lend a hand in supporting the ladies doing the promotional heavy-lifting for UFC 184.

“There’s a lot of factors that affect pay-per views,” Rousey concludes. “I think this card is going to perform extremely well. Compared to the guys, it’s going to hang in there and be respectable.”