Did you hear about the Muslim security guard called Zouheir at the Stade de France in Paris who, like, singlehandedly foiled what would have been the worst terrorist incident of Friday night?

Of course you did!

Perhaps you even felt as strongly as the Tweeter below did that it was so important the story deserved to go viral. As indeed it duly did. Among those who eagerly repeated it was that much-loved disseminator of truth, Piers Morgan, in a Mail on Sunday piece which since mysteriously appears to have been taken down. 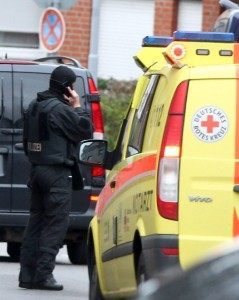 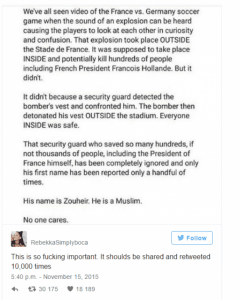 Why did it go viral? Because, as we know, quite the most important thing after any new terrorist atrocity committed by the Religion of Peace is for all right thinking people — renowned anti-gun campaigner and human rights crusader Piers Morgan, for example — to demonstrate how totally and utterly “nothing to do with Islam” they know the incident to have been.

Hence, for example, the #illridewithyou hashtag which emerged in 2014 when a deranged Islamist murdered two hostages in a Sydney cafe. Never mind the dead (cafe manager Tori Johnson and barrister and mother of three Katrina Dawson): the real victims of the incident, as all sensitive people understood, were all those Muslims in Australia who might now feel they were being given funny looks and somehow held responsible for this inexplicable act by one of their co-religionists which, of course, had “nothing to do with Islam”­™.

So an enterprising girl called Tessa Kum hit on the bright idea of turning it into a heartwarming internet meme about how someone had spotted a girl in a hijab looking uncomfortable and got-at on a train and had cheerfully volunteered, “I’ll ride with you.”

Everyone loved this story — especially the Guardian, obviously — because it showed a) how totally delightful, shy but quietly appreciative, and totally unthreatening most Muslims are and b) how incredibly sensitive, non-judgemental, caring, tolerant, non-racist, enlightened and un-Islamophobic all the people who retweeted the hashtag were. (Plus, you never know, if there were any Islamists going through people’s Twitter feeds and deciding who to kill next, then maybe this hashtag might act as a kind of defence against the dark arts spell. Not that they were thinking about that when they did it. Well, only a bit…)

The only problem with this too-good-to-be-true story is that it wasn’t actually true. Not only was the inspiring incident either exaggerated or made up, but worse, the woman who made it go viral — that’s Tessa Kum — turned out to be the author of several mildly unhinged, anti-white, racist blog posts.

Still, it didn’t diminish the public’s appetite for delightful stories about white people interacting with Muslims on public transport. Here’s another one which was on Buzzfeed just last month. This time the hero was a man called Dante who spotted a woman wearing a niqab on a train. He sat next to her. So pleased was he with his own reckless decency and courage that he then posted a story about his magnificence on his Facebook page, urging people not to be “judgemental.” They weren’t. They loved it so much that this story too went viral.

It makes you wonder, given the massive appetite for this sort of thing, whether Buzzfeed oughtn’t to open a new vertical consisting entirely of stories like this. Perhaps it called be called “Religion of Peace, Fun and Friendship.” Possibly, it could be run by the Telegraph’s Radhika Sanghani.

But enough great new vertical ideas, already. We must return to that heartwarming tale of the Muslim security guard who allegedly foiled the plot to blow up the Stade de Paris. This, it turns out, wasn’t true either…

…as the French newspaper Liberation was the first to reveal in this investigative piece.

“Every tragedy needs its heroes…” it begins. Then it goes on to explain how the story appears to have begun with a perfectly accurate story in the Wall Street Journal, which quoted a guy called Zouheir describing how another security guard had foiled the plot of a terrorist to blow himself up on the terraces in front of the France/Germany match. This then mutated into a series of stories and tweets about how it was Zouheir himself who had saved the day. Which he didn’t. (And which, even if he had, he’d probably wish to keep very quiet right now, what with the need to avoid possible retribution from fellow adherents to his peace loving religion).

“Every tragedy needs its heroes…” Yeah, sure, but do you realise how tough it is on these occasions to find ones that fit the right religious profile?