Multiple experts are calling into question the validity of the World Health Organization’s proposed revisions classifying gaming behaviors as a mental disorder.

The International Classification of Diseases, published by the World Health Organization, would define “Gaming Disorder” as a “persistent or recurrent gaming behaviour (i.e., ‘digital gaming’ or ‘video-gaming’) characterised by an impaired control over gaming, increasing priority given to gaming over other activities to the extent that gaming takes precedence over other interests and daily activities and continuation of gaming despite the occurrence of negative consequences.” In other words, a lack of self-control regarding video games is being legitimized as a specific mental illness.

This isn’t anything new. According to comment provided to Breitbart Tech by Dr. Christopher J. Ferguson of the Department of Psychology at Stetson University, “scholars have been investigating the concept of ‘video game addiction’ for probably over 2 decades now.” Despite all efforts, Dr. Ferguson points out that we still lack “any real clarity” about “how to define the concept, assess it, or whether it even is a ‘real’ thing in the sense of it being unique to video games.”

But that hasn’t stopped anyone from trying. According to Dr. Ferguson:

The concerns among some scholars are manifest.  It’s not clear why video games are being singled out as compared to many other behaviors that can become addictive (sex, food, work, exercise, etc.)

That’s why Ferguson and a number of his colleagues have published an open letter to the WHO regarding this classification:

Concerns about problematic gaming behaviors deserve our full attention. However, we claim that it is far from clear that these problems can or should be attributed to a new disorder. The empirical basis for a Gaming Disorder proposal, such as in the new ICD-11, suffers from fundamental issues. Our main concerns are the low quality of the research base, the fact that the current operationalization leans too heavily on substance use and gambling criteria, and the lack of consensus on symptomatology and assessment of problematic gaming.

And this isn’t a simple matter of semantics. The ramifications of haphazardly diagnosing people with a mental illness are enormous:

The act of formalizing this disorder, even as a proposal, has negative medical, scientific, public-health, societal, and human rights fallout that should be considered. Of particular concern are moral panics around the harm of video gaming. They might result in premature application of diagnosis in the medical community and the treatment of abundant false-positive cases, especially for children and adolescents. Second, research will be locked into a confirmatory approach, rather than an exploration of the boundaries of normal versus pathological. Third, the healthy majority of gamers will be affected negatively.

In addition to public panic, premature diagnoses, and the tendency to approach further study with the assumption that the disorder is real — the bias of the aforementioned “confirmatory approach” — there are even more serious issues at hand. First, that “the premature inclusion of Gaming Disorder as a diagnosis in ICD-11 will cause significant stigma to the millions of children who play video games as a part of a normal, healthy life.”

The most serious implications of this study, Dr. Ferguson points out, are that the classification could very easily “end up as an excuse to put some kids in harsh ‘treatment’ camps or perhaps be used as an excuse for media regulation/censorship,” especially in “non-Democratic countries.”

That conclusion might be seen as mere conjecture if not for correspondence between Dr. Ferguson and Drs. Geoffrey Reed and Vladimir Poznyak, both involved in the drafting of ICD-11, specifically noting “enormous pressure, especially from Asian countries” and “strong request from [WHO] stakeholders” to include this definition of Gaming Disorder. 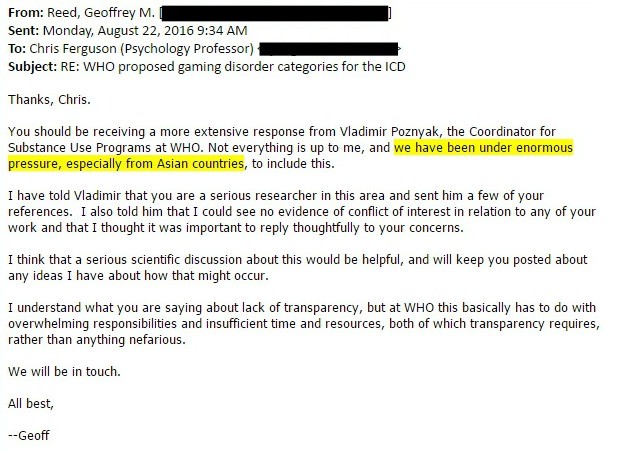 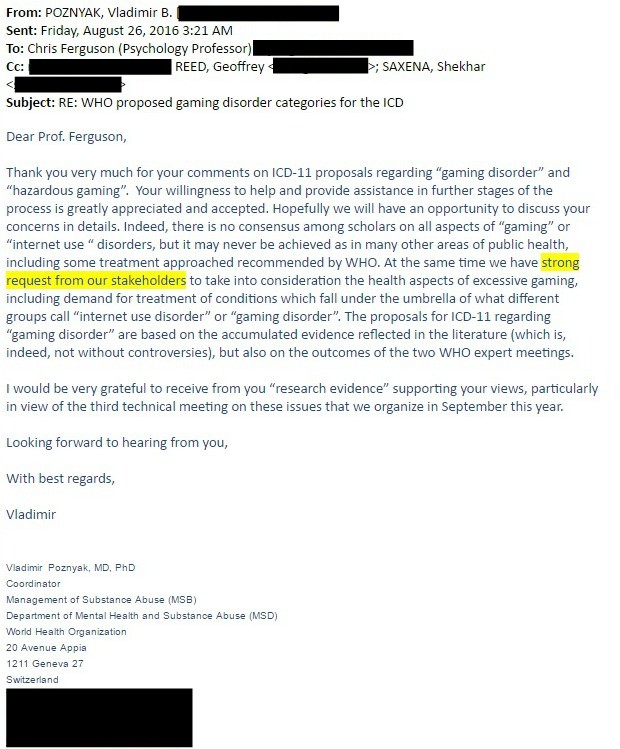 Drs. Reed and Poznyak did not immediately respond to a request for comment from Breitbart Tech.

The classification could have negative effects across the world, especially where labels of mental illness could rob someone of their rights. Imagine if having Angry Birds installed on your smartphone was enough of an excuse to mandate attendance at a “treatment camp,” and you’re starting to get an idea of how this could go very wrong, very quickly.

But even aside from all of that, Dr. Ferguson argues the science just doesn’t back up the WHO’s conclusion:

Many of the “symptoms” proposed (particularly for the DSM version) are kind of normal stuff that many studies suggest aren’t really good predictors of problems. There’s also data suggesting the whole concept of “video game addiction” isn’t really stable and tends to go away by itself over time without treatment.

The concern lies in the history of using classifications of mental illness as a weapon against groups and individuals by countries’ governments. Over 6,000 people in China — most of them teenagers — have been treated with actual electroshock therapy just because they were thought to have used the Internet too much. China also has a long history of committing whistleblowers and other dissidents to psychiatric “care” for the crime of disagreement. The subject is extensively covered in the 2002 book Dangerous Minds: Political Psychiatry in China Today and Its Origins in the Mao Era, published by Human Rights Watch.

Richard J. Bonnie’s paper “Political Abuse of Psychiatry in the Soviet Union and in China: Complexities and Controversies,” published in The Journal of the American Academy of Psychiatry and the Law in 2002, also paints a picture of just how convenient it can be for the powerful to leverage psychological diagnoses in order to silence those who disagree. He explains that such practices are “uniformly understood to be a particularly pernicious form of repression,” citing examples in which “psychatric diagnosis was essentially an exercise of social power.” By way of example, Bonnie explains:

Under applicable laws of Russia and the other former Soviet Republics, a person charged with a crime could be subjected to “custodial measures of a medical nature” if the criminal act was proved and the person was found “nonimputable” due to mental illness.7 Nonimputable offenders could be placed in maximum security hospitals (the notorious “special hospitals”) or in ordinary hospitals, depending on their social dangerousness. All the persons interviewed by the delegation had been found nonimputable and socially dangerous and confined in special hospitals after criminal proceedings that deviated substantially from the general requirements specified in Soviet law. Typically, the patients reported that they had been arrested, taken to jail, taken to a hospital for forensic examination, and then taken to another hospital under a compulsory treatment order, without ever seeing an attorney or appearing in
court.

The delegation found that there was no clinical basis for the judicial finding of nonimputability in 17 of these cases. In fact, the delegation found no evidence of mental disorder of any kind in 14 cases. It is likely that these individuals are representative of many hundreds of others who were found nonimputable for crimes of political or religious dissent in
the Soviet Union, mainly between 1970 and 1990.

And with regard to China:

Munro’s research indicates, convincingly in my view, that the Soviet system of forensic psychiatry was transplanted to China during the 1950s and 1960s, thereby placing a small subset of psychiatrists at the intersection of criminal prosecution and psychiatric confinement, and importing a smoothly oiled process by which psychiatrists found that most offenders referred for assessment lacked criminal responsibility and committed them for treatment without any adjudication or judicial oversight. Eventually, in the 1980s, China also established a system of maximum-security forensic hospitals (Ankang), modeled after the Soviet “special hospitals,” for confining offenders who present a “social danger.”

But lest you think that more open societies are immune to this insidious form of manipulation, consider our own messy history of psychiatric abuse. In 2010, a police officer was involuntarily committed to a psychiatric ward for attempting to reveal what he said was the truth about falsified crime rate statistics. He was eventually paid $600,000 in a settlement by the City of New York after filing a $50 million human rights violation suit. Our foster care system stuffs victimized children full of psychotropic drugs in a thinly veiled attempted to make them easier to handle. Schizophrenia was allegedly used to deliberately hamper the rise of civil rights. Barry Goldwater was publicly crucified for his conservative views by a team of psychiatrists who disagreed with him politically; the Goldwater Rule still exists because attacking someone’s mental fitness is such a potent weapon.

In supporting diagnoses that are nebulous and unproven, the World Health Organization is giving its tacit approval of an arguably unscientific diagnosis with endless potential for abuse around the world. At best, it could be an easy platform upon which to medicate individuals instead of identifying actual behavioral issues. At worst, it could be one more tool — easily applied to just about any connected citizen — for silencing the inconvenient.