On July 17th, 2010, 45 year old Byron Williams was stopped by California Highway Patrol officers on Interstate 580 in Oakland, California for driving erratically. A violent shootout ensued, and twelve minutes later, it was over. Police had unknowingly averted an even more heinous crime before it could occur. The police affidavit filed the next day stated that Williams’ intention was “to start a revolution by traveling to San Francisco and killing people of importance at The Tides Foundation and the ACLU.”

The left-wing media immediately pounced on the story, eager to exploit the mention of the Tides Foundation, a frequent topic of Glenn Beck’s program on the FOX News Channel. Since Beck’s arrival to FOX, he has focused in on the organization for its central role in pushing far-left policies and funding left-wing propaganda outlets like Media Matters. The liberal media watchdog site has been covering the story recently.

In fact, Media Matters, which has received more than $2 million from the Tides Foundation over the last five years, has relentlessly harassed conservative personalities and organizations, especially Glenn Beck, often in what appears to be a coordinated fashion – and to the point of complete monotony. Just search “Byron Williams” on their website – for the last week alone, Media Matters has made over thirty posts associating Beck with the Byron Williams incident, seemingly implying that Beck and FOX News are directly responsible for Williams’ actions.

That’s why it came as little surprise Friday when the Tides Foundation released this scathing letter to all of FOX News’ advertisers, signed by CEO Drummond Pike. It reads in part:

I am writing to ask your company to take a simple step that may well save lives in the future. And it is not unimportant that taking this action will remove your company and its products from any connection to what could very likely be an unpleasant tragedy, should things remain as they are today. On behalf of my organization, and many others like it, I ask that you cease advertising on the Fox News Channel.

This is neither a hollow request, nor one rhetorically made. There is an urgency to it born of our own direct experience as the target of a would-be assassin inspired by Fox’s Glenn Beck Show.

On July 19th of this year, I arrived at our San Francisco office to learn that a misguided person carrying numerous guns and body armor had been on his way to start a “revolution” by murdering my colleagues and me. The Oakland Police Department called to tell us that, following a 12 minute shootout with the California Highway Patrol, law enforcement officials arrested an assailant who had targeted the Tides Foundation, an organization which I founded and currently serve as CEO, and the ACLU for violence. To say we were “shocked” does not adequately describe our reaction. Imagine, for a moment, that you were us and, had it not been for a sharp eyed highway patrolman, a heavily armed man in full body armor would have made it to your office with the intent to kill you and your colleagues. His motive? Apparently, it was because the charitable, nonpartisan programs we run are deemed part of a conspiracy to undermine America and the capitalist system, which is hogwash.

Although not a political organization, the Tides Foundation has been a frequent target of misinformation, propaganda, and outright lies by Fox News’ Glenn Beck. Since his arrival at Fox in early 2009, Beck has repeatedly vilified Tides, suggesting we are intent on “creat[ing] a mass organization to seize power.” He accuses the foundation of indoctrination and says we are “involved in some of the nastiest of the nasty.” Beck tells viewers that Tides has “funneled” money to “some of the most extreme groups on the left” and that our mission is to “warp your children’s brains and make sure they know how evil capitalism is.” In total, prior to the attempted rampage, Beck had attacked the Tides Foundation 29 times. On September 28th, more than a month after the shooting, Beck reiterated his focus on the Tides Foundation, warning, “I’m coming for you.” In jailhouse interviews, the gunman confessed he views Beck as a “schoolteacher” who “blew my mind.” My would-be killer admitted that Beck “give[s] you every ounce of evidence you could possibly need” to commit violence.

Note that the Tides Foundation is also using this incident to raise money on its website, where it highlighted that the first appeal for donations would go toward a counterpoint to Beck’s 8/28 Restoring Honor rally.

Now, don’t get me wrong. No one condones the actions of Byron Williams, or violence of any sort, for that matter. I honestly feel terribly for the employees of the Tides Foundation; these are people who were the would-be targets of a very obviously disturbed individual. But while left-wing smear sites like Media Matters are readily assisting their big donor in pointing fingers at FOX News, they seem to be misdirecting their blame. Like it not, the instances cited in the Tides Foundation letter are easily backed up by facts through independent research.

Beck is guilty of reporting the truth – something the left likes to call “hate speech.”

What sort of society are we living in when organizations start using their power and influence to try and silence the truth? FOX News is certainly not the only media outlet ever to have covered the Tides Foundation and pointed out some of its CEO’s less than admirable activity.

Allow me to remind Americans of NY Times reporter Stephanie Strom’s July 2008 article that reported on the now infamous embezzlement scandal surrounding ACORN, in which Drummond Pike played a key role in protecting the organization from the scrutiny of law enforcement or the public.

“When the embezzlement of almost $1 million by the brother of the founder of the Association of Community Organizations for Reform Now, better known as ACORN, surfaced last month, the organization announced that an anonymous supporter had agreed to make it whole.

That supporter was Drummond Pike, the founder and chief executive of the Tides Foundation, which channels money to what it describes as progressive nonprofits, including some ACORN charitable affiliates.

Mr. Pike is a friend of Wade Rathke, the founder of ACORN and its leader until the scandal broke, and he agreed to buy the promissory note that required the Rathke family to repay ACORN the money that Mr. Rathke’s brother, Dale, had stolen.

Mr. Rathke is a member of the board of the Tides Foundation and other Tides-related organizations.”

That story took on even greater meaning at the time when it was revealed that the NY Times may have spiked another related story because it would have been a game-changer for Obama’s presidential campaign.

Is the Tides Foundation going after the NY Times for influencing Byron Williams’ behavior? After all, Mr. Williams, dubbed “the Freeway Shooter” by the media, did say in a jailhouse interview with the Examiner.com’s Ed Walsh that he was already familiar with the Tides Foundation and its activities before Beck ever began shining a light on the organization. He also said that Glenn Beck did NOT incite him to violence. 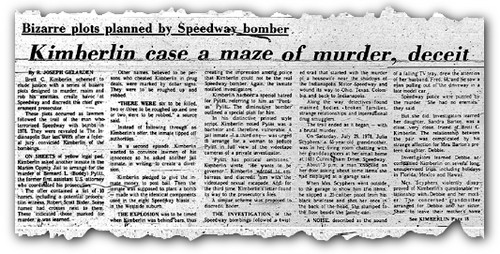 Last Monday, we published the story of convicted domestic terrorist, Brett Kimberlin, known as “the Speedway Bomber.” He spent nearly 17 years in prison after being convicted of launching a week-long bombing spree that terrorized the residents of Speedway, Indiana in the late 1970’s. One of the blasts horribly maimed a man so badly that it directly led to that man’s suicide a few years later, which was proven when the widow of that bombing victim successfully sued and won a civil judgment against Kimberlin for $1.6 million. Kimberlin was also convicted on drug charges in another case, and has a long history of telling lies.

But today, Kimberlin is embraced by the left, having proclaimed himself a political prisoner and martyr to the Republican cause, a portrayal that’s been proven false in research and court documents. Kimberlin went on to co-found Velvet Revolution. The organization describes itself as a progressive coalition that was formed “to go toe to toe with the right” because “the tactics and the power of the Democrats and progressives in this country have not been sufficient to check the actions of a corrupt Republican agenda.” Last October, Velvet Revolution launched an ad campaign which offered a “$200,000 bounty on the head” of Chamber of Commerce CEO Tom Donohue. Today, the organization is still behind some of these smear campaigns that are frequent topics of President Obama’s recent speeches.

Where does some of Velvet Revolution’s funding come from? The same place Media Matters gets much of its money:

So, as the Tides Foundation is fomenting an advertising boycott against FOX News as an outcry against the”Freeway Shooter’s” violent actions, it has handed over grant money to the organization founded by the “Speedway Bomber,” a convicted domestic terrorist who spent nearly 17 years in prison for his violent actions.