As a guest at a dinner party in Georgetown, I stormed in and started bossing everyone around.

First, I demanded that the foyer be painted a different color and wainscoting be added to the dining room. Then I had my hosts assemble their children so I could give them all different names. Before making my exit, I grabbed two legs of turkey off the entree platter and stuffed them in my purse.

I have a second confession. None of that happened. But if it had, I would be exactly like Lt. Col. Alexander S. Vindman. 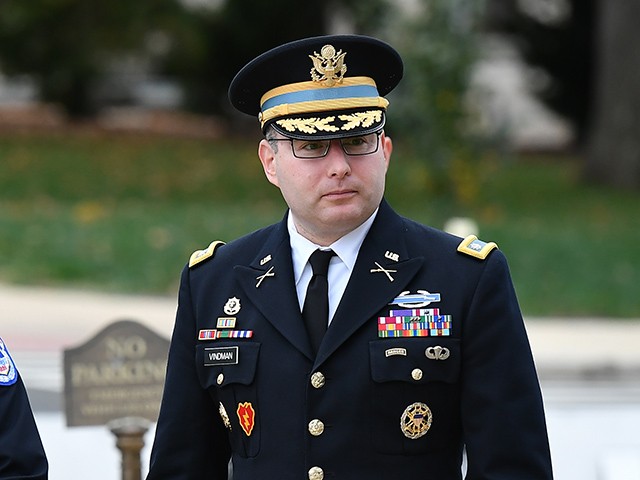 National Security Council Director for European Affairs Alexander Vindman arrives for a closed-door deposition at the US Capitol in Washington, DC on October 29, 2019. (Photo by Mangel Ngan/AFP via Getty Images)

He was born in Ukraine and raised there until age 3 1/2, when he was invited to our country. As you’ve no doubt heard, he served in our military. Thank you for your service, Colonel!

Now he is the top Ukrainian adviser on the National Security Council. Of all the people who could look out for the U.S.’s interests vis-a-vis Ukraine, we got someone who was born there.

So, naturally, when he had a policy disagreement with President Trump pertaining to the country he was born in, he thought he had a responsibility to agitate for removal proceedings against the duly elected U.S. president, just as I might have taken issue with the carpets in the Georgetown townhouse.

For some reason, we keep hearing about Col. Vindman’s valor and patriotism. I don’t doubt that he’s a super swell guy. But unless I missed it in the newspapers at the time, I don’t believe he was elected president in 2016. In fact, there’s a specific constitutional provision that prevents Col. Vindman from ever being president: He wasn’t born here.

Study question: Why might the framers have added that clause?

It would be bad enough if Col. Vindman’s policy disagreement with the president had to do with U.S. policy on Mexico or North Korea. But it was about the country where Col. Vindman was born.

We’re always told that Democrats don’t have to prove wrongdoing by Trump — for example, under the emoluments clause, in his foreign policy negotiations, or when he fired his FBI director. Rather, it’s claimed that Trump’s conduct creates the appearance of impropriety.

Well, having a Ukrainian-born analyst butt in to ensure U.S. foreign aid flows effortlessly to the country of his birth gives the appearance that he’s concerned about fairness to Ukraine. That’s not what this is supposed to be about. It’s supposed to be about what’s in the best interests of the United States.

Worse, Vindman was dealing with the U.S.’s Ukrainian policy versus Russia, which Ukrainians hate because Stalin murdered millions of them. It’s like having an Armenian advise on whether we should be hostile to Turkey.

This is not the usual dual loyalty claim insultingly attributed to Irish or Jewish Americans who were born in this country. Lots of us have admixtures of other nationalities.

But when you were actually born in another country and that’s the precise policy matter you’re sticking your nose into, people are going to wonder if it’s really our national interests you’re looking out for.

Proposed Constitutional Amendment No. 1: Immigrants are required to wait a minimum of two (2) generations before bossing around the most successful, prosperous, free country on Earth, and fully three (3) generations before advising on our government’s policy toward the countries of their forefathers.

We also need a constitutional amendment directed at 10th-generation Americans who fancy themselves foreign policy experts. Foreign policy is the idiot’s shortcut to imagined erudition, the last refuge of the insufferable.

Sen. Lindsey Graham was on TV last week, bragging about how he’d been to Syria — Afghanistan? Iraq? Who cares! — 75 times.

Not one person who voted for Graham has the peace and contentment of Syrians on his Top Ten Concerns list. Like everyone else, South Carolinians care about their jobs, their safety, their neighborhoods, their country.

But Sen. Graham wouldn’t sound like a deep intellectual if he went on TV and started talking about water treatment plants, despite the fact that clean drinking water is of far greater interest to his constituents.

It’s very romantic to think of yourself as a geopolitical chess player, jetting around the globe and staying in five-star hotels in Riyadh and Paris, chatting with dictators and reporting back your impressions as a Master of the Universe — I’m very concerned about the leadership of the Kurds … Richard Haas wrote a fascinating treatise about how our policy has been deficient in the following nine ways … I’ll be sure to bring that up next week when I’m meeting with the E.U.

These are the kinds of people who would join Mensa.

It would be annoying enough if government officials, whose salaries we pay, spent all their time working on the betterment of other nations, but at least everything turned out GREAT. In fact, however, they’re never right, they always make things worse, and they never pay a price because, again, no one cares.

Proposed Constitutional Amendment No. 2: Elected officials may take one government-funded boondoggle abroad for every three (3) trips they make to our southern border.