Texas Lt. Governor Dan Patrick’s claim that the controversial tweet following the attack on the gay nightclub in Orlando, Florida was scheduled in advance of the attack was verified as true by Politifact Texas.

In the hours following the attack on the Pulse night club in Orlando, the Lt. Governor’s office sent out a biblical verse that said “Do not be deceived: God cannot be mocked. A man reaps what he sows.” After many news outlets attacked Governor Patrick for the post which appeared to blame the victims of the shooting, Breitbart Texas asked the question if this was just bad timing. The article stated that many Texas elected officials, including Lt. Gov. Patrick routinely tweet bible verses on Sunday mornings. 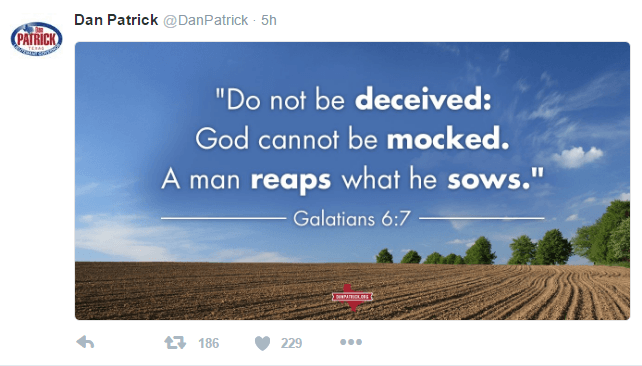 Patrick’s political consultant, Allen Blakemore, sat down with Politifact Texas this week and provided documents that appear to confirm Governor Patrick’s statement that the verse was schedule for Twitter days in advance of the attack.

Politifact confirmed that Patrick was telling the truth about the scheduled tweet stating:

Blakemore didn’t leave documents with us. But he showed us what appeared to be an email sent by an Eric at Harris Media, subject line: “Dan Patrick Bible Posts Due 12 pm,” which was sent at 1:58 a.m. Thursday June 9, three days before Sunday.

The emil said: “Imagery: plowed field similar to this (which leads to a field photo). The email also presents the scriptural excerpt from Galatians 6:7.

Blakemore also showed what appeared to be an email from a Christopher combining the excerpt and a color photo (the image that ended up in the tweet) plus a reply from later that Thursday stating: “Beautiful. Grayson, please schedule for Sunday without captions.”

Blakemore also showed what appears to be the email reply from a Harris Media employee: “Done!” A notation on the document compiling the emails says the tweet was scheduled as of 4:12 p.m. Thursday.