KATY, Texas – A cookie retail outlet suspended a teenage employee after he purchased a brownie and gave it to a police officer. 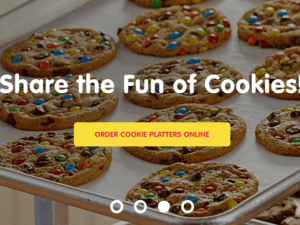 Despite Great American Cookies’ marketing message of “Share the Fun of Cookies,” the store at Katy Mills Mall suspended 18-year-old Zack Randolph after he purchased a brownie and gave it to a police officer that regularly patrols the mall. The suspension came after the person behind the officer in line complained, Fox 26 Houston reported. The mall is located in Katy, Texas, just west of Houston.

The teen did not give away the snack without paying for it. In fact, Fox 26 reported, he paid the full retail price for the brownie with his own money and did not use his employee discount.

“He’s just a really nice guy and on top of that he has a badge,” Randolph told the reporter “That’s enough for me to buy him something. That’s the least I can do.”

Randolph took $2.75 out of his pocket and paid the officer’s tab.

Randolph’s mom, Tami Randolph, told the Fox 26 reporter, “He was told you know you’re probably going to get fired.”

Following Randolph’s gesture of appreciation for the officer, the man and woman behind him in line asked for a free desert as well.

A ruckus began that escalated to the point Randolph took refuge in a back room while the store’s assistant manager and another employee dealt with the unhappy customers.

“He put his daughter down and came around to the side and was about to come back and come at me and thankfully my assistant manager and my co-worker stopped him,” Randolph stated.

Under the category of “no good deed goes unpunished,” the store’s management notified the teenage he was in trouble. They “wrote him up” and issued a one-week suspension. The written disciplinary action also included a threat of termination if something like this happened again.

In a statement reported by Fox 26, the company stated they reviewed the incident and realize “the employee was right.” They said he is no longer in trouble and lifted the suspension. Store managers wrote, “We owe the employee an apology.” The managers indicated they reached out to him and his mother to resolve the matter.