Thirty-five years ago today, John “Duke” Wayne, made famous by playing the rugged hero in westerns directed by John Ford and Howard Hawks, went to his reward.

We met at his offices in Hollywood near Paramount Pictures.Fenady, while developing Chisum (1970), accompanied Duke during and between the filming of Hellfighters (1968), True Grit (1969) and The Undefeated (1969). He was with him the night he won his Oscar and the day he celebrated with friends after being declared “cancer free” five years after his lung operation.

Before his Oscar win, Fenady said, they were having a drink at the bar and “Duke tipped his hand (when) I said, ‘Good luck tonight Duke,’ and he said, ‘Well, McFenady, we gave it our best shot.’ But, I could tell he was confident.” Sure enough, Fenady said smiling, “He let something slip on stage after he presented an award. Even though he was not scheduled to appear again unless he won for best actor, “Duke nodded to the audience and said, ‘I’ll see you later.'” 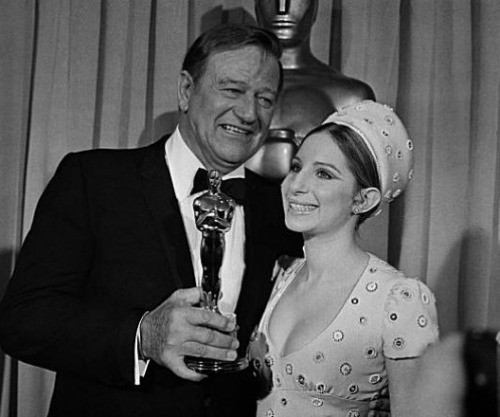 Fenady “first bumped into Wayne–almost” shortly after arriving in Hollywood in the early 50s, “still smelling of college.” He was tooling around in his Oldsmobile looking at the front of the studios, the billboards, the gates–to Paramount, RKO, Universal, Twentieth Century Fox, MGM–wondering if he’d “ever be able to be inside one of those Camelots.” As he was approaching the Barham Gate at Warner Brothers, he said:

All of a sudden, out of the gate and off the curb strides the biggest man–the biggest anything I’ve ever seen in my life–against the light. He had the red light, I had the green and he’s striding across the street like he owns it and I slam on the brakes and twist the wheel and the cars behind me do the same and I stopped and I looked out, and recognizing it was John Wayne, put my head out the window. He turned around and said, “Why you dumb bastard, why don’t you learn how to drive that damn car.” I had a ready reposte–I wasn’t going to take it. I nodded and said, “Yes, sir.” He kept walking to the Mexican café across the street and flipped the Camel cigarette before making an entrance.

Years later, in Durango, while filming Chisum, Fenady recalled this story for Wayne. Without missing a beat, he smiled and said, “Oh, were you that dumb bastard?”

One day, sitting in his office, as usual with his door open, Fenady said, “I hear Otho saying ‘Hey Andy. There’s someone out here who wants to come in and say hello. Is it OK?’ I said, ‘Bring him in, that’s what doors are for.'”

So in comes skinny little Otho and behind him, “filling the whole damn doorway,” is Duke, who comes over, sticks his hand out and shakes A.J.’s. Then Otho pointed to a blown-up publicity photo from Hondo (1953) that went all the way from the ceiling to the floor of Fenady’s office, telling Duke, “Look. See, that’s what I was telling you about.”

“Hondo. That’s one of my favorite pictures,” Duke said. “The rights to Hondo come back to me in a couple of years.” After that, Fenady said, “Duke would stop by ‘The Rebel’ dailies or the set, grinning, ‘I might want to get into this television business myself someday.’

A couple of years later, after becoming pals and working out with Duke’s son, Michael, “remembering Duke’s comment, ‘the rights come back to me,’ I worked out a deal, developed, wrote and produced the series “Hondo,” in partnership with MGM and Batjac (Duke’s production company).”

Working for John Wayne, Fenady said, meant “achievement. You were top of the world. You worked with and moved with the best.”

During WWII, he said, Duke got a bum rap because he didn’t join up: “First off, Duke was thirty-five years old with a wife, four kids and a studio to support.” He tried time and again to join John Ford’s Naval Unit but his request was blocked by Herbert Yates at Republic for just ‘one more picture’–war pictures like Flying Tigers (1942), Pittsburgh (1942), The Fighting Seabees (1944), Back to Bataan (1945). “Duke’s visits and efforts for the troops, like Bob Hope’s,” said Fenady, “continued years after, in Korea and Vietnam.”

The story of Chisum and how it came about will be told in Fenady’s book, tentatively titled, Big Enough for John Wayne… and me. But, he did tell me one story. It was when he first went to talk with him about Chisum.

“OK, McFenady,” he said, “let’s hear about Uncle John.” Well, I knew he knew about Chisum because he called him Uncle John. I said, “Look, Duke, do you mind if I light up a cigar and smoke?” (John Wayne had had a lung operation and his smoking was verboten.) He looked at me and said, “Not if you blow the smoke in my direction.” And, then, when we were going to do the picture, Duke says, “Hey McFenady, you know, when I’m up there, up on that horse (on the mountain), looking down and in a couple of other places, have Chisum smoke a cigar.” His son, Michael, and I both cleared our throats, but it was useless to protest. There was no such word as ‘verboten’ for the Duke. Chisum smoked and so did the Duke, but Duke smoked those expensive Cuban cigars in the picture… and so did I on the set.”

The film business has changed a lot since Chisum. In spite of what John Chisum (Wayne’s character) says, change has not always been “for the better.”

Duke, Fenady said, used to use the phrase “when ours was a small business.” Fenady said Columbia in the 30s and early 40s budgeted just $17 million for 53 pictures, and would make 3 or 4 films for $1 million and all the rest for $300,000 each. “It was a small business,” he said, “but it was largely owned by and controlled by first generation immigrants who came here to succeed, who loved this business. For them it wasn’t a corporation, it was their studio, their home, it was their life.” By contrast, today, “you don’t know who to go to talk to for an OK. I’ve gotten OKs by talking to one person at a studio. Today you can’t do that… There aren’t any Warners, Mayers, Cohns, Fords and Capras. It’s all mathematics.”

Asked what memories well up inside of him on anniversaries of Wayne’s birth and death, Fenady said, his voice cracking ever so slightly, “I don’t need any anniversaries to remember him… There’s not a day that goes by that I don’t remember him.” Nonetheless, two days later, on the 105th the Duke’s birth, May 26, 2012, when I asked, “Do you remember how you heard the news on the day of Duke’s death?,” he said: “I remember vividly. I got a phone call in the afternoon from a good friend of mine, Ted Thackrey, a reporter at the LA Times. ‘A.J.,’ he said, ‘we’re not supposed to release this story for another two hours, but I know you’d want to know. Duke just bought the farm.'”

The next day while we were shooting The Man with Bogart’s Face (1980),  just before noon, I asked for silence on the set and had the effects man toll a bell nine times for John Wayne, then said, “Duke beat the count–he got up and made it to the Big Sky.”

During the day, he said, numerous radio stations kept playing the theme from The High and the Mighty (1954).

Over three decades later, John Wayne remains indelibly imprinted on America’s consciousness, as popular as ever–still ranking in the top ten of “America’s favorite movie stars,” ahead of Clint Eastwood, Brad Pitt and Meryl Streep, according to the January 2014 Harris poll.

Why is it John Wayne forever commands that special corner of America’s collective mind, where we desire nothing more than the Old West values he epitomized, where good and evil are clear cut?

The answer, Fenady said, lies in Wayne’s philosophy, which was simple: “There’s only one defense: Strength. Stay strong.”

Critics of “the Old West” ushered in “New Hollywood;” the landmark film Bonnie and Clyde glorifying “bad guy” Western outlaws and outcasts, served as the vanguard. Fenady took on “those righteous revisionists of the West who take such great delight in doing everything they can to demean, defame, defile and pervert anyone who ever wore a badge or uniform, any man or woman who ever moved west” in his off-the-cuff remarks accepting the prestigious Golden Boot Award in 1995, saying (2):

Me? I’m glad they kept coming West. Otherwise California wouldn’t be the 31st.

There wouldn’t be a Hollywood. We wouldn’t be here tonight and I would not have had the privilege and pleasure of meeting and working with people like John Wayne (and so many others)…

It’s easy for the critics to look back and say, “They could have done it differently–they could have been “kinder and gentler”–well, maybe so; but the wonder is that they did it at all. And a lot of them died a not so kind and gentle death in the doing. On all sides, the paths of glory led to the grave. And there was guilt and glory enough to go around on all sides–but for the most part, right was done, and it was done right–and that’s how the west was won!

“Instead of finding the heroic aspect of a character,” Fenady said, “the Arthur Penns and Bob Altmans”–the new wave that washed in during the 60s, “did everything to denigrate and downgrade the heroes, the Custers, the Hickocks and the Buffalo Bills. They figured that was the way to get the attention of the young revolutionaries–hippies–of the time.”

Ah, but Wayne was “kinder and gentler,” as reflected in the time Duke met Fenady’s wife, Mary Frances, mother of their six children. He noticed the elephant pin she was wearing, thinking it was because she was a Republican. Au contraire, she said, “It’s a gift from my husband, lest I forget him when he’s away shooting a film. Elephants never forget.”

Years later, when the Fenadys were having dinner at Chasens with Michael Wayne and his wife, Gretchen–godparents to their youngest child, later on–fter drinks, dinner and dessert–Michael reached into his pocket, and pulled out a small elephant key chain.

But, then, who could ever forget the Duke?

A.J. Fenady re-published an earlier version of this piece, titled “A.J. Fenady Remembers the Duke,” in his novel, “Destiny Made Them Brothers.” It was originally published on the 33rdForbes.com.

Mary Claire Kendall is currently writing a book on 12 legends of Hollywood for publication in spring 2014.

(1) Writer-Producer Fenady’s long parade of credits consists of TV series,including The Rebel, Branded, Hondo, sixteen novels, seven stage plays, many Movies of the Week and features including The Sea Wolf (1993), The Man With Bogart’s Face (1980) and Chisum (1970).

(2) The Golden Boot Awards Dinner, held for 25 years from 1983-2007, benefited the Motion Picture and Television Home and Hospital, which Mary Pickford, “the woman who made Hollywood,” founded to help those in the film industry when they fell on hard times. The Motion Picture and Television Fund sponsors it. Having itself fallen on hard times, in 2009, the fund announced plans to close the home and hospital. Though, it was saved, its finances remain precarious. The night in 1995 that A.J. Fenady received the Golden Boot, he was joined by Claire Trevor and Burt Lancaster (in memoriam) among other stars.